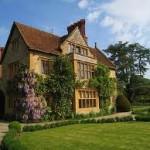 It was during a beautiful cold sunny Friday in March that I went with three of my work colleagues to Le Manoir Aux Quat Saisons. Le Manoir is located in the heart of the Oxfordshire countryside. As we turned up the driveway, the gardens looked spectacular even at this time of year. The hedges were trimmed to perfection and the vines and fruit trees pruned ready for summer.

The manor house fits beautifully into its picturesque setting and it must be one of the most attractive restaurant locations in England. Chef Raymond Blanc has been receiving a lot of attention recently with the release of his new cookery book ‘Kitchen Secrets’. A large display of the new book greeted us in the entrance hall reminding us of the marketing power of the new wave of celebrity chefs and heightening our anticipation of the culinary delights awaiting us.

When we arrived we were kindly greeted and lead through a multitude of passageways to a lovely well appointed reception room which overlooked the beautifully groomed gardens. A range of canapés served on grey slate were presented to us and were washed down by a glass of bubbly fresh Prosecco – a perfect aperitif!

Once adequately watered we were taken through to one of the quiet rooms at the back of the restaurant area. We had chosen to take the “Classique tasting menu” which was created by Monsieur Blanc to present Le Manoir’s best loved dishes.

We started with the amuse bouche of “Soupe de Poireaux et Pommes de Terre” or more commonly referred to as leek and potato soup! In my opinion (and I think it was a consensus among the group) this was one of the tastiest dishes – very intensely flavoured accompanied with an array of home made breads. The bread included pecan and raisin rolls, sourdough, beer and mashed potato (an absolute winner), French country bread – spoilt for choice.

Next we had Ravioli of Dorset crab, matched with Villard Viognier 2009, which ironically seemed very fitting considering we had just finished one of the most successful Rhône En Primeur campaigns from the 2009 vintage. The sweet crab flavours matched the Viognier extremely well, though the dish would have been better served without its lemongrass and ginger bisque.

Pan fried wild Cornish sea bass followed accompanied by a glass of Au Bon Climat (ABC) Pinot Noir – with its ripe yet perfectly balanced cherry fruit matching the star anise jus in the dish perfectly. It was unfortunate that the scallops were a touch overcooked, but the sea bass was excellent and beautifully presented.

The meat dish was roasted duck breast, caramelized chicory in a jasmine tea sauce. The combination of flavours worked well and matched the 2007 Marc Roy Gevrey Chambertin, though the wine was a little young. I had a little of the ABC Pinot Noir 2006 left in my other glass, and felt this would have accompanied the dish a lot better.

Last, but not least, we were served a Guanaja chocolate biscuit with a melting ginger and caramel centre, poached pear and Tahiti Vanilla. The chocolate biscuit was fondant in nature and we felt there was almost a hint of Rosemary in the recipe. We asked the waiter whether this was true and either he was not giving away the secret recipe, we were wrong or he genuinely did not know – nevertheless the dessert was enjoyed by all and went very well with a late harvest Grenache from Spain – beautiful sweet youthful berry fruit, lots of cassis and a fresh lingering finish.

All this was finished off with a stroll around the pond and through the wonderfully tended herb gardens before setting back off to Basingstoke!

A great day and great meal all tied up with great company!