A Taxi to El Pison

I had the great pleasure of accepting an invitation to one of my favourite producers in Rioja, Artadi. A whistle stop tour that would give a huge insight into the extremely passionate and informative world of Juan Carlos Lopez, the proprietor of Artadi. I have been fortunate enough to have met many producers in my job but none with the infectious passion of Juan. A cabinet in his tasting/dining room even boast a collection of the best wines he has ever had and they are not just his own! 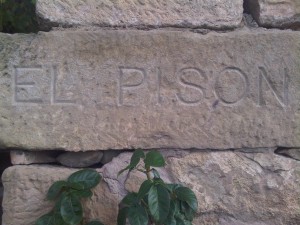 We arrived at Bilbao airport at 7.30pm and made a mad dash southwards to La Guardia where we dumped our bags at the hotel, had a sneaky cerveza, and head to Juan Carlos’ home. If you have never been, La Guardia is extremely picturesque and well worth a visit.

It was now 10.30pm and we were set for a long night. The evening started with a tasting and we decided to only focus on the El Pison vintages on offer (with the exception of the 2009) and leave the Pagos until the following morning. This, in hindsight, was a very good idea!

We started with the 2006, a wine that in my view was too closed and was giving away very little. However, re-tasting it after 30 minutes it had opened up completely. A wine that will reward those with patience as this beast will take at least a decade before it shows it greatness. After the 2006, we tried the famous 2004. A 100 point Parker wine……. I don’t always agree with Bob, but on this occasion I couldn’t flaw his notes. To put it in the words of Juan Carlos “A superb wine, quite perfect”. It was so deep, intense and perfectly balanced. There was a lovely minerally character to it and the finish just went on and on. 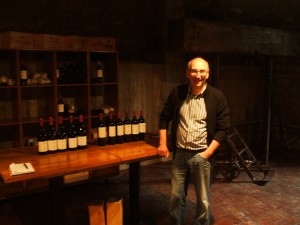 Next, the 2001 and for me, this was the more feminine style of the vintages we tried. Elegant and ready to drink now, I enjoyed every drop. Apart from the approachability it has the extra benefit of being a very affordable El Pison. Finally we had the 1998, 1996 and the 1995…….. need I say more? The 1996 followed in the footsteps of the elegant and feminine 2001, but with a touch more complexity. The 1998 and 1995 are ‘extraordinary’ wines and words cannot do them justice. All I would say is that if you can afford a six-bottle pack of either one of these wines, then please don’t hesitate to buy one. They will give you as much pleasure, if not more, than similarly priced clarets, though more in the style of a great Burgundy. Truly outstanding! JC’s passion oozes from all these wines and they show that JC is truly brilliant at what he does. 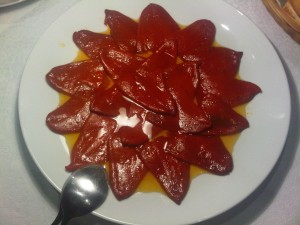 At 11:45pm we started dinner, a quintessential Spanish feast. Jamon, Tortilla and some of the best peppers I have had in my life. Followed by a broad bean and chorizo dish (extremely good) and the famous meatballs, El Bondigas. Best of all this was washed down with all the opened El Pison bottles from the tasting. Pudding consisted of apple tart with a base of crème catalan, which was to die for and accompanied by Gonzalez Byass Nectar Cream. Never heard of before, but thoroughly enjoyed. By now it was near 2am and our beds beckoned.

The following morning after a spot of breakfast we made our way to the winery, and arrived just before JC who had a most unexpected surprise for us. A white London Taxi drove through the gates at Artadi with JC behind the wheel. Our vineyard transport had arrived! 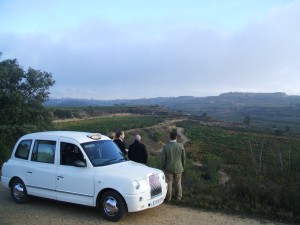 We had another look around the winery and tasted a variety of white. They were very good, but as we are not offering them, I will not tantalize your taste buds with my notes. We then jumped into the taxi and headed to the vineyards. I don’t think I have ever been stared at as much as the five minute journey to our first vineyard, El Carretil (This is one of the vineyards that makes up Pagos Viejo along with Valdepaiso and La Posa. All of which will be offered as single vineyards for 2009). The last vineyard visit, was El Pison. It reminded me of visiting DRC, a walled ‘Clos’ with a little gate as security (not that it would stop anyone wanting to get in, but it was aesthetically pleasing!).

As departure was looming, we had one thing left to do. A vertical tasting of Pagos Viejos with the same vintages that we tasted of El Pison last night.… 2006, 2004, 2001, 1998, 1996 and 1995. Again the 2004 stole the show and given time this will be a phenomenal wine. I would love to write about all the other vintages, but have probably rambled on far too much. If money was no object, I would highly recommend the 1995 and1998 for drinking now and over the next decade and the 2004 stashed away for the future. Also, the 2001 with lamb on Sunday will not let you down.

So what about 2009? I find myself becoming repetitive regarding this vintage, but it showed brilliantly. A cross between the 2004 and the 95/98. This year the three vineyards that make up Pagos Viejos will be released as single vineyards wines. Each offers the characteristics of the main wine, but the magical expression of El Carretil deserves a special mention and no, not because it is the most expensive!

One Response to “A Taxi to El Pison”