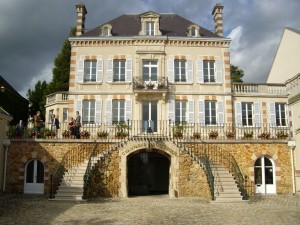 Whenever possible, I suggest tempering an early morning wake-up with the promise of a nice glass of champagne. Better still, I suggest that that glass of champagne be had in Champagne itself. Just a few days ago I was lucky enough to experience that and now I live a dismal existence in the hope of a similar jaunt in the future. We were on our way to visit Bollinger and Pol Roger, two champagne houses with unrivalled fame in England. The aim for me was not only to visit another beautiful part of France which I had never seen to before, but also to try and get a feel for the way in which both Champagne Houses expressed themselves through their ranges of Champagne.

After a relatively short journey through the tunnel we arrived at Bollinger for the first of our two-leg stint. The impression I had in my head was one of a fantastically large and grand Champagne house that exports vast quantities of its fine booze to the whole world and who, as it seemed to me, was as big everywhere else as it was in England. When I arrived I realised it was very different. The most startling point was that almost half of what this small champagne house makes it sends to the U.K. So with the idea of a very British champagne in mind, I dived headfirst into a tasting to see exactly what it was about this range that we, the British, really took to. First of all, the trademark richness of the wine having been aged in oak casks came through, as you would expect, on the palate. The Grande Année and the R.D, regardless of vintage, perform as you would expect: wonderful minerality, a complexity that often warrants much larger price tags, and most of all an astounding sense of satisfaction while tasting. I say tasting; I really mean drinking because all this intensely focused and academic analysis on premium 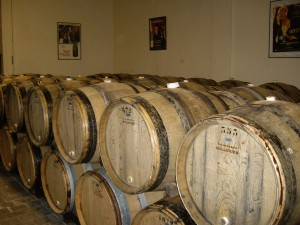 Champagne was, I’m sorry to say, accompanied by a top-class supper. However, the star of the show for me was not the classic Grande Anne nor was it the RD. It was the 2002 Grande Année Rosé that surpassed all expectations. In this, Bollinger’s trademark richness was apparent, but the unique element I had overlooked was the delightful red berry fruit that the wine had acquired from Bollinger’s very own red wine. We had the red on it’s own during the meal and it became immediately apparent that this was what caused the Rosé to shine. For a still red wine produced in Champagne, this was actually more than palatable, it was delicious! If ever a wine was worth the money, it would have to be this one. The problem, as is so often the case with wine, is waiting, as the ‘99 vintage is still drinking extremely well. With the memories of this still in mind, we left Bollinger in order to bed down for the second leg.

So, with a good night’s sleep and having had just about enough time to get over the shock of letting such a fine liquid pass my lips, I awoke to yet another day of Champagne filled promises and the excitement of investigating another world class Champagne house: Pol Roger. Before arriving, I had no idea what to expect.  I wasn’t quite under the impression that I was about to meet the very British Paul Roger and compliment him on his very fine French wine, but it wasn’t far off. I knew the NV was good but had no idea of their style as a whole. I knew, having once had a sip of their top cuvée, Sir Winston Churchill, that this house had the capability of making what I thought was the very best champagne I had ever tasted, but what else could they do? Well, there’s no better way to start than with a glass of freshly squeezed grape juice straight from the vineyards. The very amiable Hubert de Billy took us all through the maze of underground tunnels that held vast amounts of bottles. At one point (I’m not sure whether intentionally or not) we became separated from the group and utterly lost in what was, apart from the pretty apparent cold, heaven. Unfortunately we were rescued shortly after. Still, a tasting was on the way so we needed to focus. As we emerged from our obscure hiding place we were met with, or rather blinded by, brilliant sunshine. As the eyes began reluctantly adjusting to the new surroundings, I tried to determine where in France we had actually ended up. But really, where else could we be other than the soon-to-be-named Rue Winston Churchill 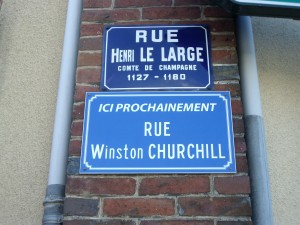 (below). And so the tasting began, starting with the Brut Nature and moving through the Blanc de Blanc ’99 to the classic Vintage Rosé 2002. This was again extremely impressive but was not the out-and-out winner from the range. It was only when we went to lunch that I realised which wine I would happily drink for the rest of my life, and it wasn’t the Winston Churchill. It was the outstandingly elegant Blanc de Blancs 1996. It was still so fresh on the nose and on the palate but with wonderful notes and themes of yeast, mushrooms and a touch of chalky minerality. The surprising thing was that I had a glass of my beloved Churchill next to it and all I could think about was the Blanc de Blancs. Still, having tasted the Churchill again, and having sampled older and newer vintages from their entire range, I was able to get a good idea of what Pol were trying to do. They had managed to make the middle ground look beautiful. They had created a style that was not too rich but yet one that had a crisp and refreshing acidity, a touch of that richness but really, an astounding level of complexity. It was only when we left to get back on the train that I was able to try their NV (a parting gift from Hubert), and even this wine showed in abundance all the elements that were so typical of Pol Roger.

On the journey back to England I was able to reflect on the education I had just been given and see what I made of it all. I was in no doubt that jumping on the next train to Gare du Nord for round two was the best way to go but as that wasn’t possible I just had to remind myself that all these delicious things I had just tasted were available on the market. Bollinger has been a family favourite of ours for as long as I can remember, and to be there, looking at the oak barrels which change the nature of the wine into the liquid I feel so attached to was truly amazing. Pol was slightly different. Their intention was to let the wine do the talking and to let us form our own opinion about their unique style. As I said before, they excel in the middle ground. Not too rich but with such complexity that makes it impossible for you not to fall in love with a yellow-green bubbly liquid. What was surprising was that neither the wines I had had in my head as out-and-out winners before the trip were the ones I left obsessing about. I feel like cornering the market on both the 2002 Bollinger Grand Année Rosé and the 1996 Pol Roger Vintage Blanc de Blanc, though as a small part of me lends itself to altruism I had better leave a few bottles for everyone else. Generous, I know. So there we have it. The two very different styles, the two highlights of the trip and all that went with it. The most important thing I have discovered is that an amazing amount of individuality goes into making Champagne and it is that individuality that I now look for in every bottle of Champagne I taste. A truly remarkable trip.

3 Responses to “Champagne: an education”