The effect of the cold snaps in Burgundy 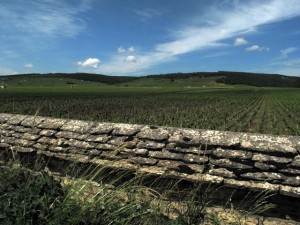 Major storms in the Mâconnais and Beaujolais on Sunday 6th June have inconvenienced local growers, with torrents of rain bringing the topsoil down the hillside. There are unlikely to be any lasting problems, just extra work at one of the busiest times of the year. Otherwise the flowering has been taking place over the last few days, suggesting a vintage around 20th-25th September for most of Burgundy, with Chablis scarcely behind the Côte d’Or. It is cool and cloudy now – we definitely need a bit of sunshine and warmth.

However some vignerons in the Côte de Nuits got a nasty shock this spring when their vines burst into leaf – or rather when some of them failed to do so. The intense cold of -20C recorded on 20th December was enough to freeze the vines to death in certain locations. This has not happened since 1985, and in fact exactly the same vineyards have been affected this time around – those on the western edge of the old RN74, where the road is banked up above the vineyard, causing the cold air to settle on humid soil. Vineyards in Gevrey-Chambertin (pictured), Morey St Denis, Vosne-Romanee, Côte de Nuits Villages and a little in Clos Vougeot are the worst affected.