The circus comes to town 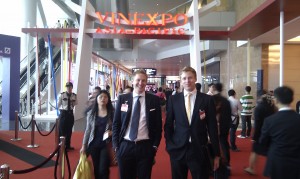 Well, it was a whistle-stop week of walking, talking and I can’t lie…  a lot of lunches and dinners! There is no doubt that the show came to town last week and there was buzz in the air. Although I’m not entirely sure on the numbers I do know that there were 750 exhibitors, and the rumour is that more people attended the event on the first morning than the whole of the previous Vinexpo, in fact, apart from the last few hours on Thursday, the HK Exhibition Centre was packed to the rafters. I’ll have to be honest, although there were a healthy amount of exhibitors from around the globe, France (and Bordeaux in particular) was where the main interest and concentration was.

Now, I don’t know how much business actually gets done at this event, and given the hustle, bustle and bruises I have on my arm from being barged to and fro, I would think not much can get done at all! However this is not the point. This event is all about networking, talking and finding out about what is going on in the wine world at present. For the Bordelaise this was a particularly important week (certainly judging by the amount of negociants present), as this was their chance to gauge whether the Asian market is a strong and as healthy as being touted by every man and his dog. The good news for them (and the bad news for us), is that they will go home with very large grins. The buzz words for the week were ‘2009’ and ‘En Primeur’, and the huge attendance at the 2007 UGC (Union des Grand Cru) Tasting  will no doubt confirm what was being hoped for in Bordeaux. Demand will far outstrip the quantity that will be drip fed from the Medoc. PRICES WILL BE HIGH HIGH HIGH! 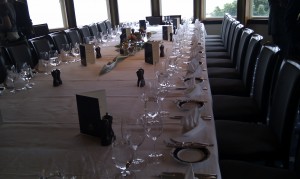 the beautiful and serene setting of the Royal Hong Kong Yacht Club on a daily basis (right). Much more relaxed chat was involved here, where talking about the politics of 2009 was not on the agenda. In fact, one of my highlights of the week was being sat next to the genial Alsace winemaker André Ostertag and listening to his passionate views on wine growing.

After these lunches was when the hard work was done for me, walking the ‘Bordeaux strip’ at the Exhibition Centre with my colleague Max (Bordeaux Buyer, who was in HK for his first time…. he won’t forget it!), chatting, listening and shaking hands with the right people. On the Thursday afternoon in particular Max was in his element, with myself on one side and my colleague Rufus on the other (both 6ft blondes so to speak – see top left), it looked like he had a couple of Russian bodyguards looking after him (granted I’m built like Rodney Trotter not Arnie). It was almost like walking through the Wet Market in Wanchai, a blast to the senses where you need to take in a lot of information in a short amount of time. 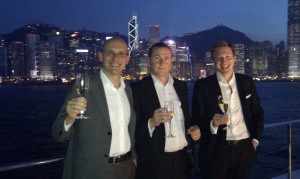 Well, what was needed after all this was a nice cruise on the harbour… and BBR delivered! Come Thursday night the aptly named ‘Grand Cru’ sailed out into the open sea with a plethora of the movers and shakers in the wine world (Bordeaux orientated, I’ll be honest!), for an evening cruise (see me above with Max and Laurent Delassus from Mähler-Besse). Champagne was flowing and it was exactly what everyone needed after three days on their feet. Sporting my new pinstripe suit from Roger the Tailor, I don’t think I’ll ever feel so much like James Bond again (above left – think the comical Roger Moore rather than the suave Mr. Connery).

As I write this and after a detoxifying weekend, Vinexpo seems a long time ago already. The dust has settled; however I am strapping myself in for an even bigger hurricane which is about hit. I have a feeling that in the next few days, the Bordelaise may get the party started and En Primeur will shift gear. All I know is that after last week, they know there is a queue round the corner to get into the 2009 party and by gee they will make sure the entrance fee isn’t cheap!