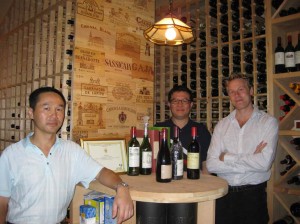 Over the weekend I met one of the most impressive collectors I’ve come across in China thus far – an absolute legend called Mr Zhang (with me in the picture, left). Mr Zhang is a perfect illustration of the levels of sophistication that some Chinese consumers are already reaching and perhaps provides a hint of where the market might be heading.

Walking into Mr Zhang’s jaw dropping cellar, containing some US$2 million worth of fine wine, what immediately struck me was not what he’s got but more what he hasn’t…there’s not a bottle of Lafite in sight! Lafite, is without doubt the default luxury wine in China at the moment and is unfortunately often consumed as a status symbol rather than out of any love for the wine itself, so meeting collectors like Mr Zhang offers a glimmer of hope for a more varied and interesting fine wine landscape in China.

Mr Zhang is a Burgundy nut, and over two years has garnered an intimidating knowledge of the region – those of you who appreciate how complex Burgundy is will know this achievement is not to be sniffed at.

He pulled a bottle of 04 Morgeot Domaine Jean-Noël Gagnard Rouge, and I listened to him talk. Mr Zhang told me that he loves Pinot 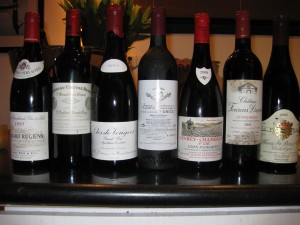 Noir because it is “飘piao” (a Chinese term which makes it’s English equivalent “elegant” seem positively clumsy) and that he finds its varying expressions from different Burgundian terroirs fascinating – at this point I’m pinching myself, how the hell has this guy got to this point in two years!?

He loves to open a few bottles and pour three glasses of each to study their evolution throughout the day, (again pinching myself). He informs me that this meticulous and slightly clinical approach to his drinking belies his background as a chemist, although as we polished off the Morgeot it became clear that he is able to just enjoy as well.

Mr Zhang, while definitely one of the more impressive Burgundy fans I’ve met out here, is, I’m glad to report, by no means alone and Pinot Noir seems to be cropping up all over the place. However interest is also not just limited to the reds: I was recently fortunate enough to try a 1982 Montrachet Ramonet and a 1989 Montrachet DRC, (thank you Windy and thank you Karl!) both of which were stunning.

A friend has even started making a Pinot Noir in Xi’an (in central China). This vineyard should be something to keep an eye on for the future, who knows, it might not be long until the Chinese are not only drinking great Pinot Noirs but also making them! But more on that at a later date…