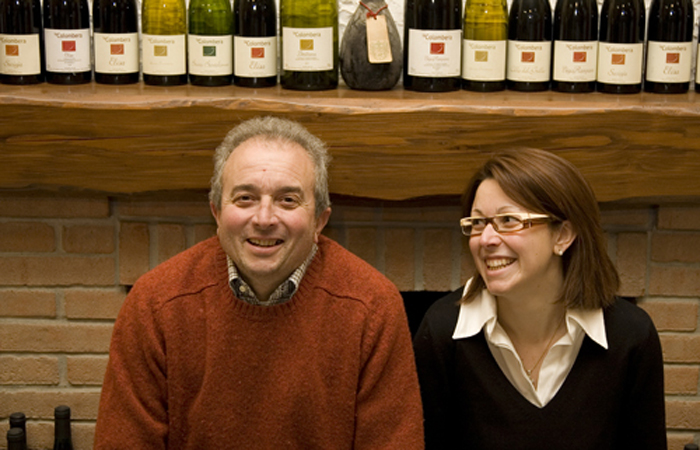 I’ve just completed a two week, nearly four thousand kilometre tour of Lower Austria and Burgenland, the Mosel and Alsace, meeting producers and assessing the quality of the (very promising) 2009 vintage – something I’ll be blogging (on) about next week. In the meantime, and as way of preparation closer to home (in Piemonte), I popped over to Tortona, an hour’s drive east of Alba to catch up with Elisa Semino at La Colombera; an opportunity also to taste her 2009 Timorasso wines.

Timorasso, you ask? Is one of the most exciting italian authoctonous/indigenous varieties to surface in recent years. An ancient variety it was brought to the brink of extinction during the ’60/’70s by the march of multinationals and their preference for facile Chardonnay, Merlot and Barbera. Local boy Walter Massa led the fight to revive this distinguished varietal during the ’80s/’90s. The style of Timorasso white wines resemble a mix of Chablis and Savennieres on account of high acidity, rich extract and propensity to develop noble rot, all grounded by fine calcareous soil that typifies this small area; a great food wine in the Verdicchio di Matelica mould (compared to the more frivolous Cortese of Gavi twenty minutes further south).

La Colombera is one of its star producers, with Elisa returning from her viticultural studies in 2000 ahead of a new cantina being built in 2003; the estate is 22 hectare in size, of which approximately half is devoted to vineyards and the rest to corn and peaches! Her passionate can-do, will-do approach is driving the quality of the wines ever higher; most important of which is of course Timorasso, vinified only in stainless on its lees without malolactic conversion. The 2007 ‘Derthona’ is a deliciously sunny wine, yet underpinned by a noble structure; while the 2006 ‘Il Montino’ represents the best fruit from a single vineyard has more deep-seated minerality and ageing potential…something that would partner fish or white fowl perfectly.

And of the 2009s? Their Derthona, from tank, showed a shrill lemon peel and salt nose; the saltiness again apparent on the citronelle and ripe lemon palate, cleansed by beautiful acidity. While ‘Il Montino’ was overall more integrated and refined, without the obvious fruit expression of Derthona, more of a seamless, gentler, creamier complexion; very much a wine of the soil and of the bright future…

One Response to “Revisiting Timorasso with Elisa Semino at La Colombera”