Where is the heart?! What makes a great wine 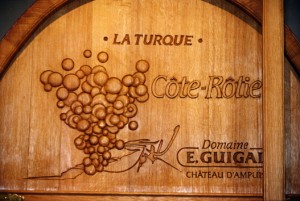 Last Thursday I was moseying my way along Regent Street in a rather good mood, as I was on way to Mark Hix’s brand new restaurant on Brewer St., Soho. I was pretty confident the food was going to be tip-top and was also pretty happy with myself about the wine in my bag to accompany lunch… 1997 Guigal, Cote Rotie, La Turque!

Now I was lunching with a customer, who’s knowledge and love of the Rhône Valley is far greater than my own, and I knew he was bringing a fascinating old Chateauneuf-du-Pape in the shape of 1989 Cuvee Laurence from the great Domaine du Pegau. So the scene was set for a grand battle… North vs South, the old vs. the new, and I was confident that my bottle one of Guigal’s legendary La La’s was going to win by the length of the straight!

Well, to kick things off we whet the whistle with a quick glass of Dog Point Sauvignon Blanc, about as refined a NZ Sauv Blanc as there is. The reds had been decanted early on and it was clear from the off that the La Turque was showing well with an incredible intensity to the nose; it was flying. It was like a boxer on his way to ring in a title fight, all muscle, power and flamboyance almost knowing how good it is (think Floyd Mayweather Junior)!! The Pegau on the other hand was a little slow out the stalls, not quit there, shy to reveal its character. Countless swirling and smelling continued before the mains were brought out… roe deer chop with celeriac mash… you little ripper, now the reds could really strut their stuff!

Well firstly, the chop was to die for but let’s get serious, how were the reds? The La Turque was exactly as I expected; it was stunning. Huge structure and weight of fruit, with refined oak to complement this intensity and the precision of a Lewis Hamilton’s F1 McLaren. The Viognier adding lift and stunning aromatics to the Shiraz. I remember tasting this three years ago and was similarly knocked out by this show pony!  However, the interesting point is that neither of us believed this went well with the food at all. There was just too much, it was almost like trying to fit a square into a circle, it was not willing to give into anything and certainly not my roe deer chop!

Now given the Pegau’s opening number, we were both expecting a rather muted performance. Well what do you know… the muted nose had slowly but surely opened up into a wave of stewed summer fruits and gentle spice notes. Not forced, not brash, just intriguing and begging you to dive back in. The palate that had appeared drying and short had woken up into a wave of summer fruits and savoury meat. It was full of life and vibrancy with an acid that just guided all of this delicate fruit. The key descriptor for me was freshness. There was an edge of wildness and volatility to it, fascinating stuff and perfect with the chop!

So then what was the verdict..?  And this is where it gets interesting…The La Turque was stunning, flamboyant and incredibly well made, perfect…. but perhaps almost too perfect. There is no doubting the quality and pedigree – It is faultless – but it just lacked a heart, a soul or real character… perhaps tasting just a little man-made? It is the faults in people that make us so interesting is it not? No good us all being the same, eh! That is why we love the likes of Paul Gascoigne, Eric Cantona, Oliver Reed… and I feel exactly the same way with my wine!

So the winner for the both of us was the Pegau. Not as flashy, not precise not as intense, perhaps not refined or perfect and it had its flaws but by gee it had bundles of identity and character!!!!

By the way Mark Hix’s Soho Restaurant is highly recommended. Good, honest, unpretentious British fare cooked to a ridiculously high standard. The man is a legend! Pus John Hutton at FMV has selected the wines…!

4 Responses to “Where is the heart?! What makes a great wine”