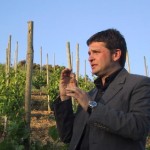 Alvaro Palacios (left) has been at the forefront of the Spanish wine scene for some 20 years now so we at Berry Bros. were delighted that he could join us and guests at No. 3 St James’s for our ‘Prophet of Priorat’ dinner on 3rd July.

If the opportunity to taste some of Alvaro’s finest wines from the renowned Catalan DO was the main draw of the evening, other outposts of the Palacios empire were certainly not overlooked.  Following a brief distraction in the form of the customary Champagne aperitif (on this occasion 2000 Le Mésnil en magnum), Alvaro’s family seat in Rioja, Bodegas Palacios Remondo, opened proceedings with 2007 Plácet. The crisp pear and cream notes of this new-wave Rioja blanco were the perfect foil to our amuse bouche of salt cod and crab croquetas with saffron alioli.  Organic since 2000, nine months in 2,000 litre oak vats lend weight and character to this 100% Viura, a grape which, for its ability to respond so favourably to oak ageing, Alvaro described as the ‘Chardonnay of the South’.

Then on to Bierzo DO where Descendientes de J. Palacios, a joint venture between Alvaro and his nephew Ricardo, is doing much to raise the profile of this little-known region’s indigenous grape Mencía.  First up with our starter of pork belly confit, baby squid and romesco sauce was the 2005 San Martín.  From 5,000 hectares of biodynamic vines worked by hand and horse in the sheltered foothills of the Cordillera cantábrica to the North and the Galician mountains to the West, this showed off the fleshy, fruity herbaceousness of Mencía to the full.  The 2001 Las Lamas, from 1.2 hectares of south-facing slate, was still more voluptuous in character, with damson fruit and a pleasing savoury dimension. Both cut the richness of the pork with panache. 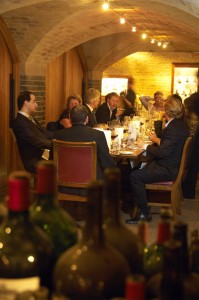 Rack of lamb with garlic and pimientos followed and it was here that Alvaro’s Priorats took centre stage.  2006 Les Terrasses – named after the steep, water-retaining terraces where this wine’s grapes are grown – was a richly-textured, concentrated expression of Cariñena (65% of the blend) with Garnacha (35%) lending characteristic structure.  1998 Finca Dofí – a more mature example of what are undoubtedly long-lived wines – offered profound, inky fruit with a smooth, persistent finish of plum, herbs and spice.

The highpoint of the evening was undoubtedly the 2000 L’Ermita. On north-east facing granite terraces, L’Ermita’s ancient vines are cowed by the prevailing sea breeze and shade into producing exceptionally low yields of Garnacha.  The result: top concentration and one of the most sought-after (and expensive) red wines in Spain.  Although still youthful, a rich but cool mid-palate of deep red fruit with coffee, clove and pine resin tones showed all of the élan which one would expect from Alvaro’s flagship wine.

Cheese brought matters to a close and the vibrant red fruit and structure of two ebullient Riojas – Herencia Remondo’s 2007 Vendimia and 2004 Propiedad – proved an ideal match for aged Mahón and Manchego.

All in all, the evening was a great success. Alvaro showcased a compelling array of wines each brought into its own by superb food.  We look forward to continuing the Hispanic theme at our next Spanish dinner in October, ‘The Excellence of CVNE & Contino’.