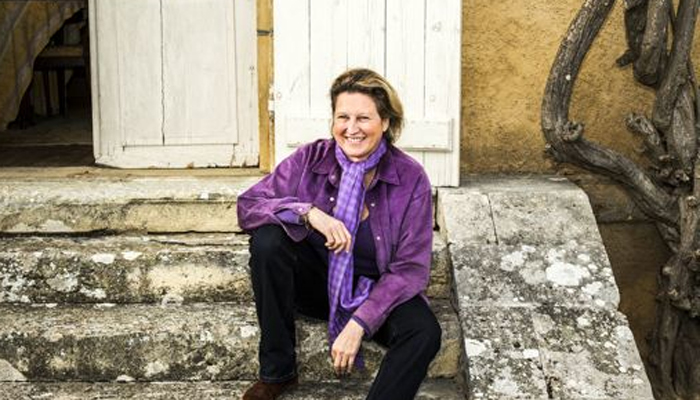 We have asked Florence Castarède, the sixth generation of the family at the helm of the Armagnac house of Nismes-Delclou to speak to us about the Armagnac, the region and the spirit. Florence took over the reins of the Estate over a dozen years ago, and continues to drive it forward, by combining innovation with the savoir-faire of six generations. She is a passionate ambassador of the region and the drink, constantly travelling around the world to teach people about Armagnac.

Can you tell us about your estate in Armagnac?
Nismes Delclou is the oldest firm producing Armagnac, having been established in 1832 by my ancestor Jules Nismes and his wife Elisabeth Delclou. The old cellars are located in the town of Lavardac, in Armagnac, next to the river Baise (a tributary of Girronde) and hold an impressive collection of very old vintage Armagnac, dating back to 1888.

Armagnac and the associated wine trade thrived in the 19th century. From Lavardac, the river allowed merchants to transport their products by boat to the port of Bordeaux, and from there to the rest of the world. The house has remained under family control and now the Castarede family, descendants of the Delclous, is at the helm. In 1979 the family acquired the historic Château de Maniban in Mauléon d’Armagnac. Mauléon is in the heart Bas Armagnac, widely regarded as the home of the very best Armagnac. The Château is surrounded by vines of Ugni Blanc and Folle Blanche. The former is the dominant variety from which Armagnac is made, the later variety adds elegance and floral aromatics to the spirit.

Tell us about your estate in Mauleon d’Armagnac.
Château de Maniban belonged to the Seigneurs de Maniban, an influential and powerful family in Gascony that had a major influence throughout South West. The property is classified as a historical monument and is a classic example of Gascon architecture. It includes 3 parts: the oldest, a magnificent fortification with two round towers, dates back to 1544, while the cellars originate from the 18th century. The main residential building was built in 1810. Since the 1990s the repair work in the old part of the Château, initiated by the Castarede family, has restored ancient frescos that were once adorned the walls of the « great hall » (Grande Salle)

What are the differences between Cognac and Armagnac?
Armagnac has a longer history than Cognac, probably produced by the Moors in the 12th century, and certainly from the 15th century onwards. Isolated from efficient transport links, it remained very much a locally consumed product until the middle of the 18th century. But the differences go further than this:

The Geographic location
The region of Cognac is situated North of Bordeaux. That is to say Western Central France. The climate is very much influenced by the Atlantic with high humidity. Armagnac is located in the South West and inland, with a drier, sunnier climate. The soil of Cognac is dominated by limestone, whereas Armagnac is sandy soil with clay. This gives the distinctive richness to Armagnac.

The Grape varieties
Cognac is almost entirely dominated by one variety, Ugni Blanc. In Armagnac there are more than 10 permitted varieties, the principal ones being Ugni Blanc, Folle Blanche, Bacco and Colombard. This allows a much broader range of flavours to be found in the final spirit.

Distillation
Distillation is the main difference between Armagnac and Cognac. The process used in Cognac is classical double distillation as found in Scotland to make Whisky. The method used in Armagnac is more basic and less industrialised than in Cognac.

Unlike a double-distillation pot still of Cognac where the spirit is typically at 72%, Armagnac uses a small continuous still called an alembic, to produce a spirit between 52% and 60. This lower-alcohol spirit retains many more flavour components that double-distillation. In their youth, these flavour components can make the spirit rustic and slightly raw. Given time (10 or more years) in cask these elements develop an impressive aromatic complexity

Ageing
Armagnac is traditionally aged in 400-420 ltr casks from the forest of Monlezun in the Armaganc region. Cognac uses predominantly Limousin oak. Gascon oak tends to be tighter and richer in tannins for slow ageing and less sweetness in the spirit, while Limousin oak imparts a distinct vanilla sweetness.

The Vintages
These are almost unique to Armagnac, where the traceability of the stock enables a full range of vintages to be offered. Vintages are rare in Cognac, where until very recently legislation has rendered them almost impossible to produce. However, the labelling rules are the same for the Armagnac and Cognac.

What are the different styles of Armagnac on the basis of ageing?
The age statements on the label, excluding vintage Armagancs, always refer to the age of the youngest eau-de-vie in the bottle.

Armagnac ***, VS or Sélection has spent a minimum of 2 years in cask.

Armagnac VSOP has been prescribed a minimum of 5 years in cask by Armagnac regulations, although Nismes Delclou’s VSOP spends no less than 10 years in cask.

Armagnac Hors d’Age or Réserve Hors d’Age is a marriage of eaux-de-vie where the youngest Armagnac has aged in wood for more than 10 years. For Armagnac Nismes Delclou Fine Old Hors d’Age : 20 years

Armagnac millésimé (Vintage Armagnac). All the above age statements refer to blended Armagnacs – a mixture of various vintages, various sub-regions and various distillation types. They aimed to promote taste consistency, so that, as in Cognac, an VSOP or XO bottled e.g. in 1980 tastes the same as a VSOP or XO released in 1990.

A vintage Armagnac is distilled from grapes originating from a single vintage. It is placed in cask without any blending with other vintages and by law, it has a minimum 10 years of ageing. The date of bottling is as important as the year of production. For example a 1979 vintage bottled in 1990 will be different from a 1979 vintage bottled in 2008, as the former has undergone 11 years of ageing, as opposed to 29 years for the latter. With the Vintage Armagnac from Nismes Delclou, we bottle in very small batches and my cellar master hand writes the date on each bottle. Vintage Armagnac is much sought after by connoisseurs but it is also an excellent choice as an anniversary gift. Nismes Delclou features more than 50 different vintages.

How do Armagnacs from different decades (1950s, 60s, 70s) differ from each other in taste?
Each Armagnac is different because it reflects the characteristics of the vintage from which the wine for the distillation comes from. The quality of the wine, (which starts from the vineyard and its soils and the climatic conditions of the vintage, and continues with the distillation) as well as the ageing of the eau-de-vie (the type of casks used) all leave a variable, distinct stamp on the resulting Armagnac.

It is difficult to generalise, however when comparing Armagnacs from different decades, one thing is certain; each decade has its own distinctive style:

Armagnacs from the 1950s
are sweet and perfumed, with intense aromas of spices, prunes, dried fruits and rich vanilla overtones. These are mellow, round, complex Armagnacs, having slowly evolved from around 50 years in cask.

Armagnacs from the 60s
have a more floral nose complemented by vibrant aromas of fruit jam. Also notes of tobacco and wood have often developed. The 1970s produced distinctively fruity Armagnacs, with intense and vibrant flavours on the palate; there are more lemon-citrus and floral notes, with overtones of ripe prunes and cinnamon spicy.

What sort of dishes does Armagnac accompany well?

Dishes that match Armagnac very well are the traditional dishes of the south west of France. The staple of Gascony cooking: Foie Gras, game in rich sauce (wild boar, venison, pheasant, pigeon) and the local speciality Magret de Canard (breast of ducks raised to produce Foie Gras. These breasts are thick and have a much beefier taste than ordinary duck breasts).

Blue cheese (e.g. Roquefort , Stilton), most fruit-based deserts and tarts (e.g. apple, lemon, flambé banana) and even deserts based on chocolate are an excellent complement to Armagnacs. Fish is difficult to match with Armagnac; however a Shellfish Gratin cooked in white Armagnac sauce works very well.

More on the subject of gastronomy and cooking with Armagnac in the book by Florence Castarede will be published in spring 2009 by Editions Sud Ouest.

On 31/10/08 the 5 star resort Grand Old House in Cayman Islands staged a luxurious dinner, on which Nismes Delclou Armagnac was served with each one of the courses. Can you tell us how the food and Armagnac match worked?

What better way to appreciate the beauty of Armagnac than to indulge in a lavish dinner that includes a pre-selected Armagnac to accompany each course. Foie gras terrine started this unusual but exciting dinner and this dish required an Armagnac of intense and powerful fruitiness, as the sweetness of the fruit helps balance the greasiness of the meat. The 1970 vintage was just perfect.

After the starter, a lemon sorbet with (a novel, light, unaged style of Armagnac) White “Blanc” Armagnac was offered. This provided a little relief to digestion in the middle of the meal and was simply delightful. Armagnac XO – 20 years was served along with Confit de Canard because Armagnac XO Armagnac is round and sweet, perfectly matching and balancing the flavours of duck confit.

The cheese course required a powerful, structured Armagnac that would be able to stand up to the robust and pungent flavours of the Roquefort. VSOP 10yo was chosen and wonderfully complemented. A vintage 1979 accompanied the dark chocolate tart dessert and this full-bodied Armagnac, with its intense complex flavours, was still able to shine through despite the profound sweetness of this type of dessert.

Very old Armagnacs from the 1908, 1900 and 1893 vintages were served alongside a selection of chocolates and provided a fitting conclusion to the end of the meal.

Translated from French by Eva Polaki