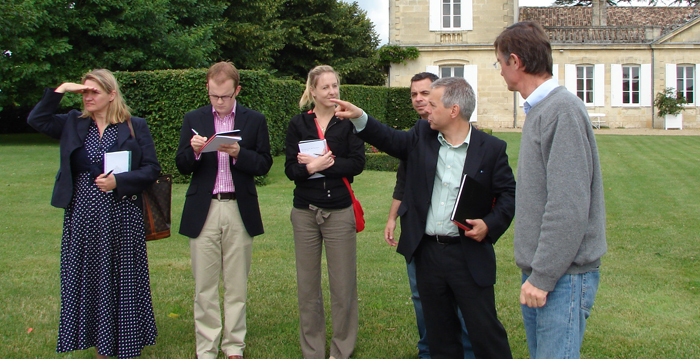 As we rambled through St Emilion and Pomerol today we found it increasingly difficult to visit a château without bumping into one of the members of the Thienpont clan.

It must be quite galling to own one of the greatest estates in the world and not even produce the best wine in your own family. One can probably hold off the violins for the moment but such is the lot of Alexandre Thienpont at Vieux Château Certan in Pomerol.

In 2007 he has produced an aromatic VCC (16.25/20) of great finesse and precision, closer in style to Burgundy than Bordeaux. It lacks the density of great vintages of VCC but Alexandre has got it spot on in terms of getting the most out of the vintage and not trying to force the wine to be something it’s not.

He realises that you cannot fight against nature; you can’t make a 2005 if you have a cold, gloomy summer however much green or pink harvesting you do, and however much you chaptalise or use the rarely-mentioned concentrators. So to that end Alexandre’s VCC is a success, and a pleasingly early drinking one at that. 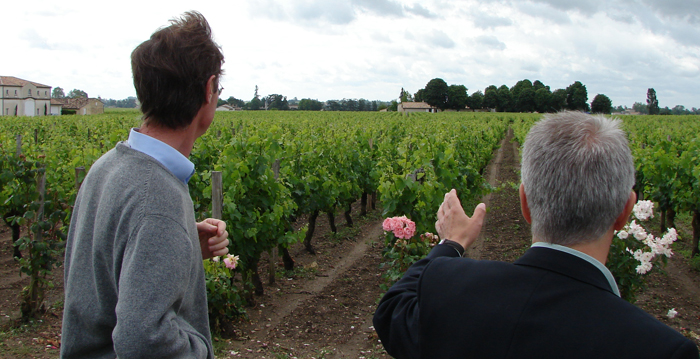 A short leap from Alexandre is cousin Jacques  at the small shed of a winery that is Le Pin. It is fair to say that Jacques is cut from slightly different cloth than his quiet, modest cousin; a witty, engaging chap without any airs and graces (for a Bordelais anyway).

Certainly his warm, relaxed welcome belies the fact that he owns one of the finest, most expensive and sought-after wines in the world. It was my first visit to Le Pin and it really is as remarkable as everyone says.

A small house in the middle of the vineyards (right), its downstairs garage is home to 4 or 5 steel cuves, a few barrels and a palette or two of wine. Its simplicity makes most Burgundian estates look like Mouton Rothschild (well almost). You don’t have to ask Jacques how much wine he has made, you can just count the barrels (34 this year, for the record, poor maths notwithstanding).

It was nice to see that the future is in good hands too. His polite, well-mannered (as so many French children seem to be) young son George was working hard helping out with the En Primeur tastings. A request for some more Le Pin from some other visitors was met with a firm, albeit rather high-pitched ‘Il n’y a plus’ (There’s none left). The boy is learning fast.

As for the wine, well, like VCC, 2007 Le Pin is a Burgundy-styled Bordeaux but with the volume turned up. It had a heavenly nose, finely textured tannins, focused cassis and raspberry fruit and a finish of great intensity. An unforgettable experience. Le Pin is one place where you don’t bother asking about pricing. With the tiny quantity produced, however good it is, Le Pin is not really about value for money. It is a wine where, as they say, if you have to ask the price it is probably not for you.

The final stop on our Thienpont world tour (I’m sure there are T-shirts available somewhere) was the much lesser-known St Emilion estates of Larcis-Ducasse  (left) and Pavie-Macquin where another cousin Nicolas Thienpont is effecting a quiet revolution. We have been real fans of this estate since 2005 and 2007 did not disappoint.Both wines were excellent, and received a very solid 16/20 score.

The Larcis was more feminine with lots of fine, ripe, succulent fruit, while the Pavie-Macquin was very refined too but richer and more structured. Both should be very good value buys this year.