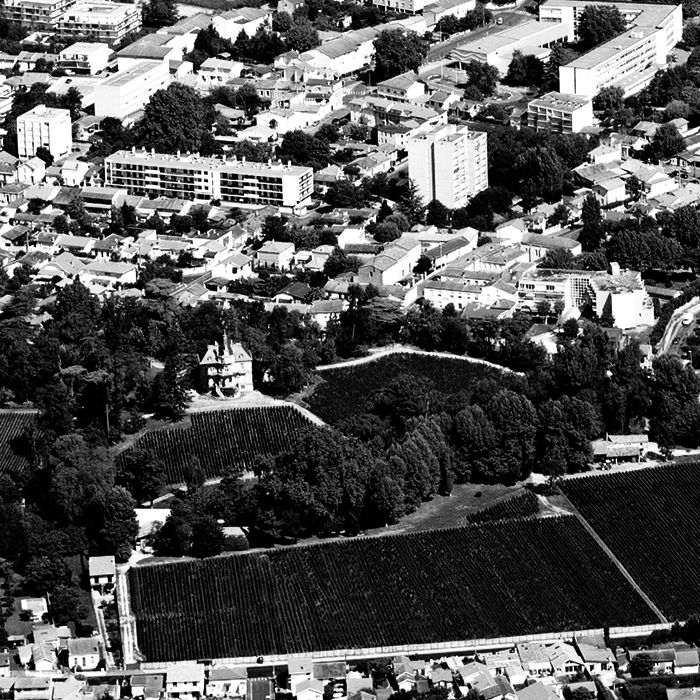 Ch. les Carmes Haut-Brion – a relatively petite property by Bordeaux standards – is nestled in amongst the city’s sprawl. Here, Alexis Self visits the château and its unusual, almost inner-city vineyards

I arrived at the wrought iron gates of Ch. les Carmes Haut-Brion on a balmy July mid-afternoon. Often seen as the smaller and less well-known of the four Graves châteaux that take their name from Jean de Pontac, the Duke of “Hault-Brion”; the “Carmes” refers to the Carmelite Order, who in 1584 were bequeathed land containing a mill and some vineyards by the duke.

In terms of agriculture, Carmes has more in common with an inner-city allotment than the rows and rows of immaculate vines you’d usually associate with big Bordeaux châteaux – that is, of course, if your allotment features a shed designed by Phillippe Starck. It wasn’t always the case that you could walk uninterrupted by green pasture through Bordeaux’s honey-coloured streets until you reached its famous vineyards.

As a London boy, I’ve never been on the other side of the insatiable urban sprawl, and always struggle to comprehend how a city can so mercilessly swallow up the surrounding countryside. However, while it might be a stretch to stand on Shepherd’s Bush Green trying to imagine flocks of sheep grazing among the crisp packets and Special Brew cans; Les Carmes still feels like a rural redoubt surrounded on four sides by hungry concrete.

On a warm summer’s day, it’s a picture of bucolic bliss: a mother duck leading her five ducklings on a waddle around the pond, while in the vineyard one of the estate’s two Breton horses, Ulysse, gently pulls a plough through the soil. During the French Revolution, the land was requisitioned from the monks who had tended it for 200 years and, a few decades later, sold at auction to a family, the Chantecaille-Furts, who ran the estate until 2010. As Sylvie, our erudite and charming guide, tells us, a 100-year-old member of the family still lives in the château from which the whole enterprise takes its name. Its ivy-covered balustrades gaze down on the 29.6 hectares of vines; squinting at the windows, I think I see a curtain twitch…

The estate was bought by Patrice Pichet, a millionaire property developer and local boy, who has made it his mission to modernise Carmes without losing its idiosyncratic charm. Unusually for the Graves, Carmes devotes only a small percentage of its crop to Cabernet Sauvignon, with the majority being Cabernet Franc and Merlot. Besides reflecting its slight outsider status, this also, of course, impacts the wine, which is more aromatic than you’d usually expect from a Pessac Claret and with a deep, silky finesse.

A cuve painted in 2015 by Ara Starck. Photograph: Philippe Labeguerie

In June 2016, a new building was inaugurated to coincide with the release of the 2015 vintage. Designed by Philippe Starck and Luc Arsène-Henry, it thrusts the thriving 21st-century city of Bordeaux into the 16th-century Bordelais vineyard. Rising out of the water like a St Tropez mega yacht, hidden within its glistening metallic panels are a brand-new vat house, barrel cellar and reception rooms.

The building might have the appearance of a Bond villain’s secret lair but once you get inside you realise how much love and attention to detail has gone into its design. Being so close to the city, any new building made for storing and making wine had to be properly temperature-controlled while retaining its eco-friendliness (something Starck insisted upon on signing up). This was achieved by creating a man-made lake and making the storage room subterranean, meaning it is kept permanently cool by the water outside.

In the vat house circular sky-lights beam cylindrical rays of sunshine into a brow-shaped room lined on either side with shiny new oak, stainless steel and concrete vats; the latter of which put the “art” in “state-of-the-art”. To coincide with the opening of the new building, each vat used to make a vintage of the Grand Vin will be painted by a famous artist; 2015, the first, was by Ara Starck, while the 2016 vat features a phantasmagorical painting of a sun and a moon carrying a bunch of grapes by Spanish artist Sergio Mora. The hunt is on for the next brush-wielding maven but, as with everything else at Carmes, everyone’s remaining very, well, calm about the whole thing. In fact, from the way Ulysse pulls his plough, to the way the spiral staircases in the new building twist up, corkscrew-like, to take visitors onto the roof; everything here is done flawlessly with minimum fuss.

That said, Sylvie appears to be glancing nervously at her watch; then I realise Les Bleus kicked off their World Cup quarter-final against Uruguay at four, and it’s quarter-past: sacré bleu! Apologising profusely, she asks if me and my three friends might like to join the estate’s other 12 staff in the newly-restored cottage at the front of the property, which serves as a boutique and tasting room. Five minutes later, 17 of us are huddled around a tv passing each other plates of saucissons and glasses of 2011 Ch. les Carmes. The French win the match with an assured and measured performance, never really seeming to break a sweat; proving that, as with most things in life, it pays to keep calm.

Browse a range of wine from Ch. les Carmes Haut-Brion on bbr.com. The château now offers tours of the estate year-round; for more information, please visit their website.