Who makes the rules?

As The New Wine Rules hits shelves, we leaf through Jon Bonné’s latest book and talk to the San Francisco-based author declaring a new age of fearless wine-drinking

There is an endless supply of lighter literature aimed at making wine “easy” – pressing, filtering, fining, simplifying and compacting the vinous world to give you 100-or-so pages in which to become an instant expert. As much as I’d like it to be – wine isn’t like that. The very endless complexity that makes it so interesting – and indeed so daunting – can’t be chopped into bitesize Buzzfeed-friendly chunks.

So, when I saw that American wine writer Jon Bonné – one of my very favourite journalists, author of The New California Wine and Senior Contributing Editor at online magazine Punch – was publishing a book called The New Wine Rules, I doubted him. I feared that he had lost his way, potentially led down an alluringly income-lined road to offer coffee-cup wisdom to the masses.

Having now devoured both US and UK versions of his book, it’s clear that I should have kept my faith. The title is perhaps a little misleading. Yes, the book is ordered into 89 “rules”, but really this is a book filled with the titbits every wine lover will – or should – learn during their vinous career. The New Wine Rules wraps them up into one neat little tome – wittily phrased, prettily illustrated and perfectly bound. The declaration on its front cover that it is “a genuinely helpful guide to everything you need to know” doesn’t overstate its utility, but neglects to state the sheer joy of this book.

“The past couple of generations of wine lovers have spent their lives guided by fear – of displaying bad taste or revealing what they don’t know. Screw that. Wine is too great a thing to be limited by fear,” declares Bonné. The New Wine Rules is a manifesto for the modern wine drinker – Jon champions the idea that, in the 21st century, there are no rules; and the one thing we should all do is “drink wine with joy”. 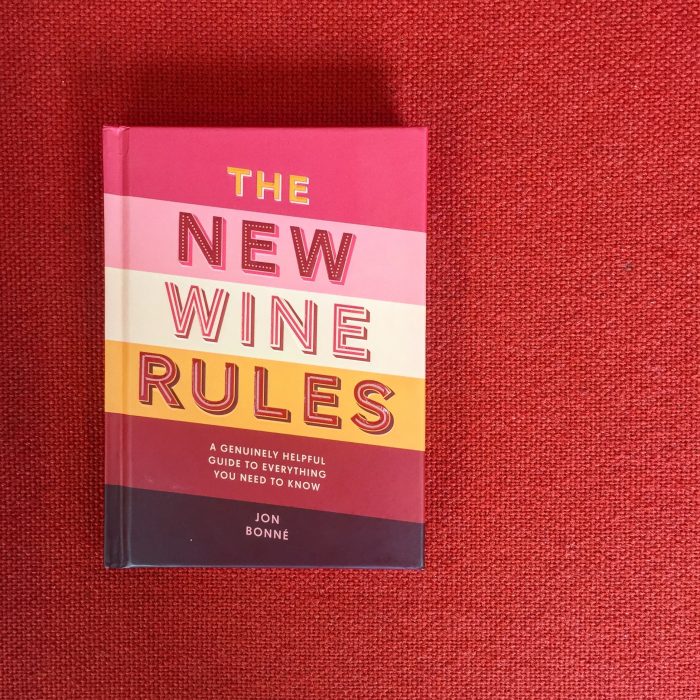 Morsels of advice range from “A wine’s price rarely reflects its quality” and a “cool matrix” of regions and grapes, to “Don’t save a great bottle for a rainy day”: there is almost nothing that I don’t heartily agree with.

The introduction – unlike too many wine books – swipes away the potential superiority of the author: “My wine life isn’t that different to yours: I’ve walked into plenty of wine shops and gotten lousy advice, I still struggle through wine lists [… and] I’ve had sommeliers talk down to me more times than I can count.” It is this undercurrent of accessibility, a tone that is conversational rather than preachy, that makes this a book I’d happily give to non-wine friends. And that is the intention.

While the book doesn’t shy away from technical details in places (you can “never go wrong talking up to people,” Jon says), its intended audience is people who are just starting to learn about the subject – people who have an interest, but not yet the knowledge. Jon’s inspiration came when he and his wife ended up – accidentally (and subtly, I’m sure) – eavesdropping on a group of young professional women in a restaurant in San Francisco. They were clearly engaged and keen to drink something good, but they floundered trying to pick a wine. Jon decided there was a place for a modern guide that would help wine-drinkers just like them – too many introductory books in circulation were “living in a world that doesn’t exist anymore”, he told me, explaining the difference between Sauvignon and Chardonnay. And, thank goodness, The New Wine Rules is deliciously, moreishly different.

It might seem with The New California Wine, The New Wine Rules and The New French Wine on the way, Jon Bonné is hooked on what’s “new”. When I ask him why and whether this is something we should be seeking out, he chuckles. “Aside from being a really great sales hook, you mean?” With his background in journalism, he is driven by “what’s emerging, what’s coming, what’s new” to make his writing relevant. He’s also seen many wine critics caught covering the same thing for 20 years – a rut in the road which he is keen to avoid.

From a Christina Aguilera reference and advice on avoiding unnecessary gadgetry, to “Let the term ‘unicorn wine’ die a quiet death” and “Beware the fruit salad”, the book is packed with so many quotable gems that I could go on forever (or at least until I’d copied out all 17,000 words) – so go buy it, read it yourself, give it to friends, and drink every bottle with as much joy as Jon seems to.