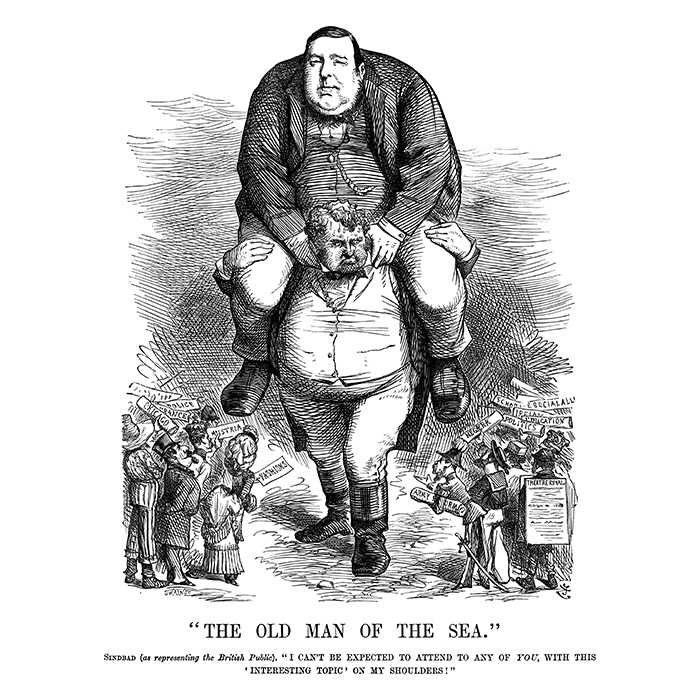 A cartoon on the Tichborne Case, printed in November 1871, reproduced with permission of Punch

In the 19th century, the curious habit of weighing our customers proved its worth – providing essential evidence in establishing an Australian butcher’s true identity. Here, Will Lyons explains how

It was a case which captivated Victorian society for decades but is now largely forgotten. It involved an aristocrat – presumed drowned at sea, one of the greatest imposters of history and the ledgers of Berry Bros. & Rudd. The case of Sir Roger Tichborne not only divided educated society and stirred the imagination of London’s public, it proved that perhaps Mark Twain was right when he said “truth is stranger than fiction”.

It begins in 1854 when Roger Tichborne, heir to the Catholic Tichborne Baronetcy in Hampshire, boarded a ship – the Bella – bound for Jamaica. A week later the ship was found capsized off the Brazilian coast and it was assumed all the passengers were lost. There were rumours that some had been rescued and Roger’s mother, Lady Henriette Tichborne, refused to give up hope. In 1863 she took out a series of advertisements in The Times and some Australian newspapers, offering a reward for anyone with further information on Roger’s fate. Step forward Arthur Orton – a butcher from Wagga Wagga, some 300 miles south of Sydney – who claimed he was the missing Tichborne.

Despite the uncanny resemblance to the 11th Baronet, there was only one problem with his story – his weight. Arthur Orton was considerably larger than Roger, excessively so. Not that it deterred him in the beginning. The aspiring Tichborne sailed to England where he managed to convince many of Roger’s friends and acquaintances, including Lady Tichborne and the family solicitor, that he was in fact the missing heir. Others were not as convinced.

An agent in Australia had traced Orton’s background to a family living in Wapping in the east end of London. Apparently, the young Orton had jumped ship, first to Chile and then ending up in Australia. A trial ensued, and Orton’s fraudulence was revealed. He was eventually sentenced to 14 years in prison for perjury.

What is little known is that the Judge, Mr Chief Justice Bovill, knew of some very interesting evidence, unknown to both sides and which never came out at the trial. According to the account of Bostonian lawyer Richard Hale, recorded in a 1957 issue of Number Three Saint James’s Street, one afternoon Mr Chief Justice Bovill made his way across the park to No.3, where he met with Henry Berry, great-grandfather of the present chairman Simon Berry.

Since the 1760s, Berry Bros. & Rudd has been recording the weights of its most prominent customers on the famous weighing scales in the shop. So it was on that afternoon in 1871 that Henry Berry and Mr Chief Justice Bovill poured through the ledgers and found the weights of Tichborne’s father and grandfather. Needless to say, the two deceased Baronets, one weighing 9 stone 11bs in 1788 and the other 10 stone and 8lbs in 1822, were (at around the same age of the claimant) considerably lighter than Arthur Orton, described as “a man-mountain of enormous bulk, weighing over 24 stone”. The evidence was conclusive.

Arthur Orton was released after serving his 10 years in prison and – despite a brief career as a curiosity in music halls – he died penniless in 1898. In one final twist, the Tichborne family allowed a card bearing the name “Sir Roger Charles Doughty Tichborne” to be placed on his coffin, and the coroner’s death certificate read “Sir Roger Tichborne”. Arthur Orton always maintained he was the real Roger Tichborne.

This article was originally published in the Autumn/Winter 2018 issue of No.3.