Below the surface: the Napoleon Cellar 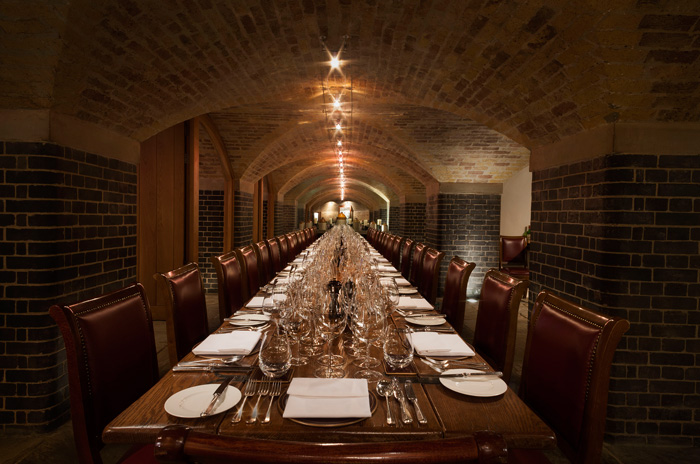 Deep beneath the shop at No.3 St James’s Street lies the Napoleon Cellar, named after Louis-Napoléon III, the nephew of Napoleon I. These days, it hosts long lunches and sumptuous dinners for up to 37 guests, as well as our annual Wine Club walk-around tasting, but its history can be traced back to the 1800s, when France’s fate was uncertain and the country’s future leader held secret meetings there to plot his return to power.

Following the defeat of his famous uncle at Waterloo in 1815, Louis-Napoléon was, with his mother, exiled from France. Following the death of Napoleon I’s brother in 1831, he became heir to the dynasty and started plotting the Bonapartes’ return to power.

A modest chap, Louis-Napoléon wrote, “I believe that from time to time, men are created […] in whose hands are placed the destiny of their countries. I believe I am one of those men. If I am wrong, I can perish uselessly. If I am right, then providence will put me into a position to fulfil my mission.” His attempted coup in 1836 failed, and when he tried to seize the throne again in 1840, he was unsuccessful and imprisoned: for the time being it seemed that poor Louis-Napoléon was destined to “perish uselessly”.

Escaping in 1846, he returned to Britain and took up residence a short walk from Berry Bros. & Rudd, in a townhouse on King Street (apparently with a small staff of 17). As Chartist riots raged throughout the country, the authorities deemed it necessary to appoint special constables to defend St James’s Palace: Louis-Napoléon signed up for special duty alongside his friend George Berry, a second-generation wine merchant in St James’s. The truncheon used at the time by le petit Napoléon can still be seen in the cellars at No.3 today.

Fearful of assassination, Louis-Napoléon took to hiding in the cellars at No.3 St James’s Street. Realising the underground location’s potential, he used the cellars as a base to meet political allies and formulate public statements or correspondence, in preparation for his return to France and to power. As a regular visitor, he was also one of the many people to be weighed on the giant coffee scales in our shop (10 stone 8 lbs, in case you were wondering) and gained 4 lbs over the two years he spent in Britain.

Louis-Napoléon was evidently plagued by paranoia, as Sherer, the reputed editor of The London Standard, described following a meeting with the future Emperor: “During the whole time I was at work Napoleon never once left my side. Suspecting all, trusting none, even at this period in his career, he evidently thought that were he to turn his back, I should pocket one of his copies.”

By 1848 France had descended into another revolution which gave Louis-Napoléon the opportunity he needed to return home unimpeded and be declared President of the Second Republic of France (the first to be elected by popular vote). He went on to become Emperor; and it was under his reign that Baron Haussman’s public works were commissioned, reconstructing Paris with the grand avenues, magnificent parks and smart squares that the city is known for. Most importantly for those in the wine trade, it was Emperor Napoleon III who requested a cataloguing system for the best wines from Bordeaux in 1855, a classification which remains influential to this day.

It was arguably Louis-Napoléon’s dealings under the shop at No.3 St. James’s Street that laid the way for his return to power, thus the Napoleon Cellar of today bears the name of our illustrious French guest.

Read more about the history of Berry Bros. & Rudd.

Visit the Napoleon Cellar yourself by attending one of our lunches or dinners.