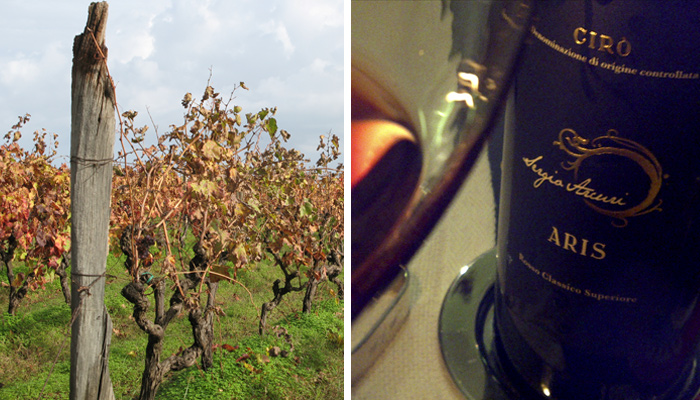 Located in Italy’s toe, Calabria presents a very different landscape to that of Puglia’s stilettoed heel. Different not just geologically but also in the way their society appears to be woven together. The net effect has obviously influenced the character and quality of their wines. In November last year I ventured south, in search of the (holy) Gaglioppo, an ancient grape responsible for the elegant Cirò DOC.

Cirò is the prime three thousand hectare viticultural zone lying on the east coast of Calabria, overlooking the Ionian sea to Puglia on the horizon. Compared to the fresh, damp, granitic terroir of the western, Tyrrhenian sea coastline, Cirò’s location is sheltered by mountains, dried by African sirocco winds while enjoying sedimentary calcareous clay soils. Its eucalypt-dominated landscape conjures up visions of Australia (the trees were introduced to combat malaria, absorbing excess water), while the undulating coastal range up to 250 metres above sea level reminded me of Santa Barbara (minus the fog).

Topographically the province is dominated by a range of two thousand metre mountains; Calabria’s ‘carbuncles’ have shaped communities and proved an impenetrable barrier to would be invaders. Take the Normans for example, a Puglian descendant of whom recounted how his forebears, wilting in shining armour no doubt, chose the direct route to Sicily via Calabria, only to be repulsed by mountain dwelling folk (and no, not by magicians called ‘Tim’). They completed their mission in boats instead.  While Puglia’s blessed with a lattice of roads across its flat plains, encouraging trade and mobility, Calabria’s settlements are isolated on the mountain fringes.

Ill-served by government, Calabria remains oppressed by organized crime – the ‘Ndrangheta – that stymies everyday life, restricting entreprise, liberties and rights. Agriculture remains key to the region; their oranges and peppers are some of Italy’s best, yet viticulturally it has become overly dependent on EU handouts, promoting quantity over quality in the face of vanishing bulk market; a situation that in the last thirty years resulted in many old vineyards being replanted with more productive new ones. With 50 million hectolitres of unsold wine in 2005 something had to give, much of coming from the DOC of Cirò.

Gaglioppo is Calabria’s ancient and revered red grape variety; a fickle, thin skinned variety to ripen, the seeds (tannins) lagging behind that of the sugar and acidity, hence requiring dry ventilated weather and a perfectly timed harvest (alla Nebbiolo). Traditionally the Cirò DOC was a blend of 95% Gaglioppo and 5% Greco Bianco, but this has changed in 2011 with the disciplinari (regulations) now a minimum 80% Gaglioppo and 20% other red varieties; either the more colourful Malioco or Greco Nero, or more likely Merlot and Cabernet Sauvignon. In its prime DOC Cirò possesses a pale brick colour; a nose of pretty red fruit, tobacco, leather, dried roses; the palate suave, haunting, fine and complex, with bright acidity and firm tannins – indeed Nebbiolo-esque! How droll to discover that one of the largest bottlers, Librandi (2 million bottles/anno), remains true to Gaglioppo, in producing a pale red, soft and elegant wine while a new artisan producer had opted for the international route, their Cirò being dark, lumpy and faceless!

So there’s a new wave of artisan Cirò producers coming through who are aiming for quality by bottling their fruit rather than sell it off in quantity (if they can); something they’ve only just starting doing in the last ten years at most. Producers such as A.Vita, Sergio Arcuri, Tenuta del Conte and DuCropio are worth seeking out. And should you be passing, make sure you lunch at Aquila d’Oro in Cirò (tel 3335893021); an exquisite trattoria.

Now to meet Luigi Tecce, another producer who’s bucked the trend during the past decade in shifting from grape supplier to wine maker. Luigi’s family own 6 hectares of Aglianico in the prized Campanian villages of Paternopoli and Castelfranci, increasingly famous for producing the statuesque, quivering reds: Taurasi DOCG. Over to you Luigi…!

One Response to “Introducing the Cirò wines of Calabria, & Taurasi’s enigmatic Luigi Tecce…”