Chianti-shire: one bit of Europe I think the English would rather like to cling onto… 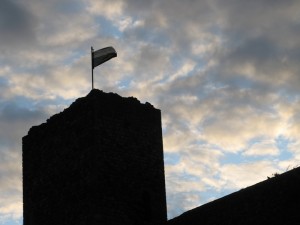 experiences with five Chianti Classico counterparts, including Bibbiano, Badia a Coltibuono, and Castello di Ama. A fascinating experience viewed through the eyes of Italians, and at the same time reminding me of just why ‘Chianti-shire’ remains such a pull for the Inglese!

The phrase about Englishmen and their castles hung in the air as we wound up lengthy drives towards imposing castelli, owned often by Marquises and Counts, their hunting dogs and helps scurrying between vast, draughty halls. Such a setting, I could see, would strike a chord with homesick Brits, gazing up at these fortresses, rich in heraldry, noble pride and cobwebs; their largely not-for-profit viticultural activities propped up by EU subsidies, preserving an ancient feudal landscape… for now. 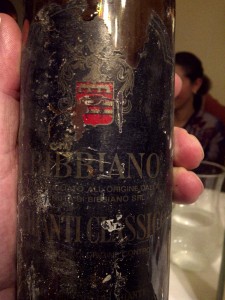 Each visit a lesson in history it seemed (and don’t we Brits just love a story!) For Bibbiano it goes back to the Romans, to AD 200-300 when all the ‘-anos’ were conceived (Bibbiano Lilliano, Cacchiano etc..). The Bibbiano estate then passed through the church and into the hands of the Marrocchesi Marzi family during the 19th century. During the last war, the family domain, perched high up on a ridge near the Classico village of Castellina in Chianti, was occupied by a small troop of Germans who apparently held up the American advance for a month, holed up inside the main house.

Badia a Coltibuono, whose stunning abbey (‘Badia’) lies high in the Chianti hills, was very much the archetypal polycultural estate dating back to the 11th century, whose management were the monks of the Vallombrosan Order. Their agriculture combined forestry (chestnuts grown on the north facing slopes, oak the south) with animal husbandry. Later, with Napoleonic secularization in the early 19th century the estate was then bought by the current owners, the Stucchi Prinetti family; now based in Florence.

Indeed, whereas most of our Italian suppliers ‘live above the shop’, their homes set among the vines, the Tuscans, like many of the Bordelais, are, to a man, owned by absentee landlords. With their homes in Firenze or Siena, and their money-making businesses in Roma, these country estates are an escape; a place to reconnect with their roots. No surprise then, as on the Gironde, it’s also a wine consultant’s paradise, for better or for worse.

Compared to the small plots common to Piemonte (c. 3ha), estates are impressively large in Chianti. Of the five we visited, four weighed in at over 200 hectares; Badia a Coltibuono the largest at 700 hectares. And while the Piemontese grow grapes on virtually every scrap of land, in Tuscany viticultural is very much only a part of their existence. Badia a Coltibuono now plough a 21st century variant of polyculturalism: producing wine, olive oil while managing a restaurant, an agriturismo (B&B), and a cookery course. Castello di Ama now seems as famous for its collection of modern art as it 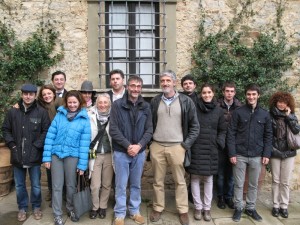 is for its avant-garde wines.

Little wonder then that these Tuscan estates draw parallels with those of Bordeaux (and Piedmont to Burgundy), and finds favour with English palates. The brick red colour, light bodied wines favoured by traditional Chianti Classico estates such as Bibbiano, Badia a Coltibuono and Villa Calcinaia for example, would seem to reflect an Englishman’s preferred (‘clairet’) style of wine, where freshness, modest alcohol levels and drinkability are important. Fashion has, as we know, played a heavier hand in the way wines have been made ever since Tignanello first came out with a 100% Sangiovese in 1975, ostensibly for the US market; Castello di Ama following up with the coveted if controversial 100% Merlot wine ‘L’Apparita’ in 1985. Yet one sip of Bibbiano’s brilliant 1980 Chianti Classico, a field blend of Sangiovese, Caniolo, Malvasia Nera and Trebbiano Bianco clearly showed that their forefathers knew what they were doing; as from vintage 2006 no more white grapes may officially be added to Chianti Classico, yet with climate change and a sign that consumers are tired of heavily extracted, fashionable wines perhaps a rethink is called for!

And what an honour to be invited to meet Signor Giulio Gambelli at home. Gambelli, ‘the godfather of Sangiovese’ and master assaggiatore (taster, not consultant!) has had an unprecedented influence on some of the region’s noblest 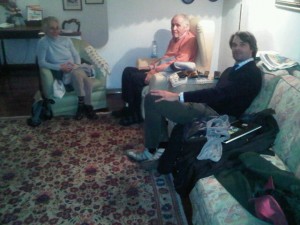 wines (Poggio di Sotto, Montevertine, Soldera…). Since he was a young man in 1942, Signor Gambelli has been a welcome visitor to the Bibbiano estate, not just for the hunt, but also for his cuttings of prized Sangiovese Grosso; grapes that now find their way into their single vineyard Riserva ‘Vigna del Capannino’.