“Look how the warmth of the sun makes wine” Dante Alighieri in his acclaimed 14th century  poem, The Divine Comedy, reminds us of nature’s ability to transform and elevate the humble grape into a work of art; turning water into wine. Far from being a ‘classicist’ – although I sense I have a taste for ‘classic’ wines – Italy’s rich culture is a constant source and reminder of these very words, producing stunning wines from the most modest of origins. 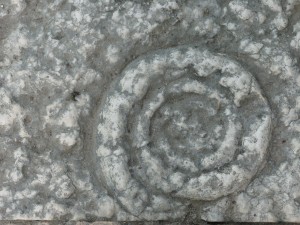 Valpolicella producer Monte dei Ragni is a case in point. Located at Fumane owner/ winemaker/ agronomist Zeno Zignoli lives alongside 15 members of his extended family – six of which are retired – and spent eight years preparing the ground before releasing his first vintage in 2003. Zeno makes the wine from 2 hectares. There is room for a little more growth as his brother-in-law sells off fruit from a further 6 hectares of prime Fumane terraced vineyards that rise up behind the family homestead from 350-500 metres asl. The other brother minds the estate accounts and ferries the six pensioners back and forth from the village below.

It’s worth adding that Monte dei Ragni in fact also bathes in 60 hectares of woodland that covers the Valpolicella Classico hills. According to Zeno this precious resource must continue to balance the relentless march of the (monocultural) vine. It is under constant threat however, as here in the Langhe. For the estate is hemmed in on all sides by the voracious brands of Allegrini and Tedeschi, desperately buying up tracts of formerly unfashionable hillside terraces now the (cheaper) plains are exhausted.

Zeno’s touch paper was lit in the eighties while at the local Instituto di Agraria (viticultural college). He couldn’t believe the Institute didn’t offer a course on organic farming, that everything was dependant on using chemicals. Disenchanted he left to join the Cooperativo di Otto Marzo, an operation that handled fruit from only organic producers. There he met his wife Antonella, the daughter of the Ragni proprietor, and now they have two fine boys: Tommaso and Leonardo. 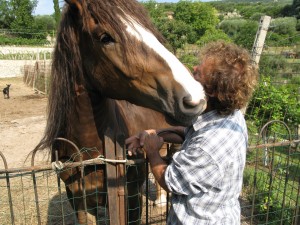 They’ve a third ‘child’ in the form of ‘Bilo’, a three year rare shire known as a ‘TPR’: ‘Tiro Pesante Rapido’/Fast Puller of Heavy loads; a breed that was used by the Italians during the First World War to pull artillery (fast). With Zeno clinging onto the plough behind, Bilo slices through the hillside ‘pietro di Lessinia’ limestone and clay soils. Of the 8ha under vine, 90% are pergola trained Corvina (Veronese), Corvinone and Rondinella, the remaining 10% are high guyot trained Molinara, Oseleta, Sangioveto and Ancelotta (a grape originally from Emilia-Romagna). Why pergola you ask? Corvinone, Zeno argues, needs ample vegetation (like Nebbiolo) while the smaller berried Corvina (Veronese) burns easily so requires shade. He also plants polenta maize between the rows to satisfy the roaming cinghiale/wild boar and of course uses ‘horses tail’(equisetum arvense) as a natural source of silica and potassimum salts for the vines in spring…harvested from around his own pond up the hill! 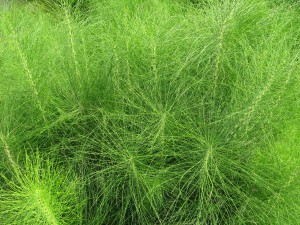 When it comes to vinification, Zeno, for his Superiore Classico, uses trays to dry his freshly picked fruit over a couple of weeks, evaporating the fruit by approximately 10%, while fruit for the Amarone Classico is hung up bunch by bunch on a suspended net to air dry naturally over several months, losing approximately 60% of its water. This is a time-honoured, labour-intensive practice ensures that each bunch dries perfectly in its own space, rather than clumped together with others in a box. Fruit rot is therefore minimised; the fruit dries more completely; the quantity is further reduced (as unhealthy bunches drop to the ground) and the family (all 15 of them!) have 36 hours to attach the harvest before the window closes! Fermentation & affinamento/elevage takes place entirely in used French oak tonneaux from the forests of the Massif Centrale. Unsurprisingly production is at approx. 300 cases/annum: 200 cases of Superiore Classico and 100 cases of Amarone Classico). Think Quintarelli, not Dal Forno! 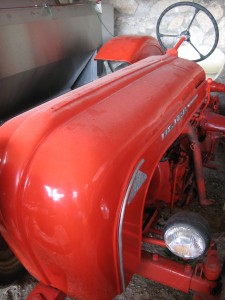 And if that wasn’t enough, Zeno has a passion for old tractors, cars and ploughs (for Bilo)! There’s the rare red Porsche tractor, the Polish one he picked for nothing before spending a year restoring it and now he awaits his prized Citroen DS…their 1 million kilometre Toyota must wait awhile before its turn!