I have tasted only a few wines from 2010 so far and all have been in their infancy. It is therefore a bit too early to pass judgement, but the 2010 Bordeaux vintage is looking promising. 2009 was a great final chapter to what has been the most successful decade Bordeaux has ever seen, but 2010 is looking set to be the start of another one. It is too early to say and we will be going back in early April to taste all the wines, but in the meantime here are the hard facts so you can make your own judgment: 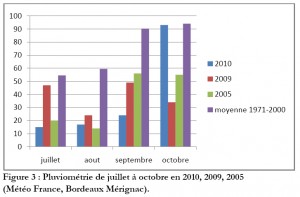 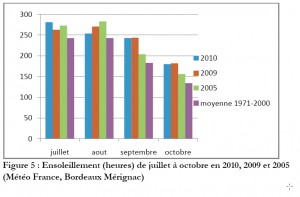 So… the chance of having good wines is very high and I guess the main question is of price…. it is always one of painful anticipation; we wait and wait and then they all come out like chickens crossing the road, peering at each other waiting for the first one to get run over, and then readjusting their paths accordingly. Having spoken to quite a lot of properties and Bordeaux wholesalers it is fair to say that there are different views. We all know that the Asian market has played a big role in the increase of prices over the last few years and although proprietors were very happy to forget about the traditional markets in order to switch to new territories, I think there is now a definite desire from certain properties to re-centre the balance. Therefore, in order to appeal to the European and American market, once more the Bordelais will have to think twice about their pricing strategy – not an easy thing to do when you know that most European merchants and customers will see the low prices as an opportunity to speculate.

Some properties have already started to appoint exclusive distributors in China in order to focus and control their Asian distribution and dampen the parallel markets’ activities. Others are quite happy surfing the wave and will definitely go as far as possible to unload their crop at the best price possible. That said, when asking the proprietors about the pricing levels for the new vintage they are more quiet than usual; May is a long way away and a lot can happen between now and then. 1989 and 1990 were consecutive excellent vintages but the latter was released on the eve of the Gulf war and took five years to sell. Libya and Japan may be on their way to recovery by then, but they will definitely leave some sentiments of incertitude in the air. We will report on the quality of the vintage as we taste next week and we should see some wines released after Parker’s scores are released at the end of April. Watch this space…