At Berrys we sell many of the world’s best spirits but my focus at work as PR Manager, and at home as a consumer, is predominantly on wine.
My preamble is the result of a new discovery – a love for Cognac! (apologies to those of you who already do…)

Definitely Delamain – A Fine Cognac Tutored Tasting was presented by Delamain’s Director Général Charles Braastad who captivated the gathered audience of 28 for two hours during which he presented eight Cognacs. 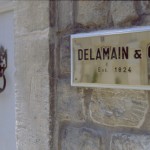 The first thing we learned as beginners was that you only need your nose in a tasting to appreciate Cognac. There is no need to taste, we were told. I thought this was a tasting…..! Another point we soon noted was that Cognac shouldn’t be confused with brandy – brandy can be made anywhere around the world but Cognac is just from Cognac in France, obvious really I guess.

Delamain Pale & Dry was the first in our flight of eight samples. As with all Delamain Cognacs, it is from the exhaulted region in Cognac known as Grande Champagne with the average age of 25 years. Apparently this is their ‘entry level’ Cognac and it was delicious…I couldn’t wait to see what the others tasted like.

We tasted Delamain’s Gensac la Paullue, a single vineyard, (30-year-old); then a clear favourite with the men, Vesper (35-year-old); followed by the1979; the Extra (40-year-old), onto Tres Venerable (55-year-old) to Reserve de la Famille. This was an astonishing 60-years-old. What became clear was the incredible value in Cognac. If you compared it to a 40-year-old whisky for example you would be looking at two or three times the cost. Which is amazing considering it is such a handmade product – from the expert blending to the hand labelling of each bottle.

Delamain is a serious producer of haut couture Cognac, they only produce Grande Champagne premier cru Cognac and have no V.S or V.S.O.P level, as Charlie said “We start where others finish, with X.O.”

The tasting ended with Delamain Le Voyage, never before shown at a tasting. Charles told us it took two years to develop Le Voyage, which is a unique blend of lots of years ranging from 1847 to 1947. What an honour! Priced at £5,100 a bottle, this was the most expensive drop of anything I have ever tasted.

What a voyage this tasting was.