How can anyone govern a nation that has 246 different kinds of cheese? 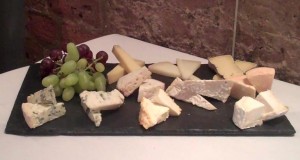 Thankfully the recent French Wine & French Cheese evening in our Pickering Cellar didn’t quite aim to cover all of the above, but we did get through quite a few…Here at Berrys we have been hosting wine & cheese events with our neighbours Paxton & Whitfield for many years, but it is only recently that we have expanded the series to focus on the wines and cheeses of particular countries, notably Spain, Italy and of course France, a country steeped in a long tradition of both vin and fromage.

The event took us on a wine-and-cheese tour of most regions of France, and was a delightfully decadent way to end a cold, grey winter week. Guided by the expertise of Josh Collier of Paxton & Whitfield, we tasted ten fabulous pairings, some classic and some slightly unorthodox.  Apart from sheer enjoyment, there was an experimental element to the evening: first, would it be better to match a cheese with a wine from the same region, and second, would the classic matches win over their slightly more off-the-wall counterparts?  See below for a full list of the pairings tasted, but here is a round-up of the most interesting.

Champagne was the first match of the night, and certainly an unusual one since we very rarely think of matching Champagne with cheese.  The cheese was also from the Champagne region: Langres, a soft cow’s milk cheese with a full and rich flavour. The wine chosen was Lahaye’s Brut Nature, a bone-dry ‘zéro dosage’ style with no sweetness added, allowing the firm acidity to stand out.  Overall a highly successful match, since the minerality and crispness of the Champagne acted as a perfect foil to the creaminess of the cheese.

So were all our pairings from the same region such a success? The pungent Alsace cheese Munster is always a challenge to match with wine, and is often paired with a Gewurztraminer (in this case André Ostertag’s 2008 ‘d’Epfig’) from the region.  In this case, the pairing was not felt to be a success, as even the richly-textured, perfumed Gewurztraminer didn’t quite have the ‘oomph’ to stand up to the dominant finish of the Munster.  There were also pairings of wines and cheese from different regions which worked splendidly, most notably the fabulously complex 1996 St Julien from Château Gruaud-Larose alongside the nutty, robust Ossau-Iraty from the foothills of the Pyrenees – this was a special experience, with the lingering finish of both wine and cheese remaining in the mouth for a long time.

Then to the classic matches, whether from the same region or not.  The zesty, herbaceous 2009 Sancerre from André Dezat was a gloriously harmonious match for the tangy and crumbly Pouligny St Pierre goats’ cheese from the same region, and was one of the favourite matches of the night.  And one of the final pairings, Berrys’ Sauternes with Roquefort, is a classic match venerated by the French, with good reason.  The two wines held their own against each other, with the sweetness and richness of the Sauternes a perfect foil for the saltiness of the blue cheese.  In a vote conducted at the end, a resounding 15 out of 30 guests picked it as their match of the night.

So: conclusions from the evening? First, off-the-wall pairings are definitely worth a go.  Second, whilst it often works, it’s not always ideal to match a cheese with a wine from the region. Third, the classic matches (Sancerre and goats’ cheese, Sauternes and Roquefort) continue to be made in heaven.  One final point to remember, however, is that all our palates are different, and if you like a match don’t let anyone tell you it doesn’t work!  This diversity of opinion regarding food and wine is why we are determined to continue helping you discover your own passions through our series of Food and Wine Matching events. And with any luck, before too long we’ll have worked our way through all two hundred and forty-six of those cheeses…