If You Ask My Advice, Chapter 5, Absolute Corkers – A Wine Buff’s Bedside Book of Anecdotes and Funny Stories by Ned Halley 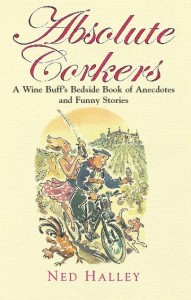 Can wine merchants be trusted to give good advice? Some. Berry Bros. & Rudd, in my own happy experience, is among them. The firm is often called ‘the Queen’s wine merchant’ because it has a royal warrant from Her Majesty and has its shop just across the road from St James’s Palace in London. Buck House is just around the corner in the big park. But this is not why I have such a soft spot for Berrys.

I have been an occasional customer for ever, and once took my two children, when they were quite little, to visit the shop. I thought they might be thrilled by the antiquated interior, which looks like something out of a Hogarth cartoon, and features a weighing machine from the days when Berrys was a general grocer. This contraption was retained when Berrys became a full-time wine merchant centuries ago, because their customers liked to be weighed on it. The firm has nine volumes from 1765 recording and avoirdupois of the good, the bad and the odious. Included are Beau Brummell and Lord Byron, William Pitt and Charles James Fox, Napoleon III and very much later, famous figures such as Lawrence Olivier and Vivien Leigh, not to mention more contemporary celebrities.

None of this much impressed my young children. On the contrary, they were both rather spooked by the old shop, with its steeply sloping floors, dark corners and grave-looking pinstriped assistants. I was disappointed they did not share my enthusiasm for what to me was, and remains, my favourite of all London emporiums.

But time goes by. Both the children grew up and escaped our sequestered Somerset life by enrolling at London universities. And then one Christmas they presented me with a bottle of wine in a very smart Berry Bros. box. They had saved up, travelled all the way from Bloomsbury to the shop (a miracle of navigations, I’d say) and told the assistant they had this much to spend and wanted the best bottle of claret available for the money, for their dad.

Now how many wine merchant would you trust to play it straight when presented with a pair of punters like this? Wide-eyed undergraduates without much to spend might well be expected to be treated, in such a very regal old merchant’s, with condescension at best. But that’s not the way, according to the children’s reports, that it went at all. There was a brief discussion as to whether the wine was desired for keeping or for drinking fairly soon, and then a bottle of Chateau Pichon-Lalande 1997 was produced. It was in budget, and came recommended. They didn’t have a clue whether it was a good buy or not. But when I received it on Christmas Day, with delirious (all right, tearful) appreciation, I knew it was a very good buy indeed. The children had been treated with courtesy and were sold a great wine from an affordable (rather than overrated and price-bloated) vintage. They were given the same consideration as Byron or Vivien Leigh might have expected, except that, as far as I know no one offered to weigh them.

I told the children what a wonderful, if extravagant, gift this was and what a good wine. They believed me, because some time later I shared it with them. And they have since given me a few other wines from Berrys, each as well chosen, by all parties concerned, as the first. The children have entirely lost their fear of the shop, and even claim they enjoy making forays there. They are both now earning their livings in London, and I look forward to hearing one day that they might just pop in to buy a little something for themselves.

This is one of the things I believe makes the world of wine such a happy place to live in, and in which to bring up children.