From Vosges to Muenchberg, Alsace

Initial impressions of wine regions can often disappoint: arrival at a non-descript airport followed by a drive across a bleak light industrial landscape until hills loom into view on the horizon and vines are finally spotted. My first visit to Alsace was no exception, the drive from Basel airport across the border towards Colmar memorable only for the torrential rain, rather disappointing given Alsace’s track record for the second lowest rainfall in France after the Languedoc. After an hour on the motorway we were winding our way up into the mist-shrouded foothills of the Vosges, with vines stretching away on all sides: much more like it. 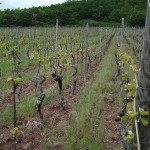 Monday dawned a little clearer and the Vosges loomed large as we set off to meet Olivier Humbrecht MW at his winery in the Heerenweg vineyard just outside Turckheim. Lest we were in any doubt about the weather, Olivier explained that this year’s May was more like an average March, but that the rain was more welcome viticulturally than the dry conditions which have recently strained vines in the region, last year particularly.

A detailed summary of Alsace’s unique and variegated terroirs followed, with Olivier keen to dispel the generalisation that the fertile vineyards on the Alsatian river plain necessarily produce the region’s least interesting wines. The varied topography here means that gravel and loess outcrops can produce compelling wines, even if the lack of the rich mineral deposits found elsewhere (and above all in Alsace’s Grand Cru vineyards) means that grapes do not reach their zenith at these lower altitudes.

Zind-Humbrecht’s wines (from a fluctuating body of 40 to 50 ha of vineyards) undergo gentle pressing over 18 to 24 hours, and natural sedimentation of the must followed by fermentation after about 10-15 days. This can last anything up to a year. The wines are kept on gross lees to build character until the April following the vintage. Tasting-wise, we found ourselves spoilt for choice but most memorable were a captivating 1990 Gewürztraminer Grand Cru Rangen with a nose of beeswax and saffron followed by crème brûlée on the palate and a 1988 Pinot Gris from magnum, with hay giving way to notes apricot and truffle. That most of the wines we tasted had been open for a few days was testament to their concentration and staying power. Fantastic.

Next on the itinerary was Hugel et Fils, where we met export manager David King. One of the region’s most highly-regarded family businesses, Hugel is keenly positioned to build on its export heritage in Asia and the Middle East where its wines were known before the Second World War.  Alsatian white wines have a distinct advantage over some in this regard: they are varietal wines easily spotted on wine lists and seem to complement Asian cuisines particularly well.

China and Japan are prime markets for the 100,000 cases or so produced by Hugel each year, from a typically-parcellated 180ha of vineyards split between some 350 growers. Vinification of Hugel’s three ranges ‘Classic’, ‘Tradition’ and ‘Jubilee’ (the latter being produced from hand-picked grapes from vineyards owned exclusively by the family) still takes place on-site at the company’s ancient premises in the centre of Riquewihr, with élevage split 50:50 between tartrate-encrusted oak and stainless steel. This despite constraints of space and increasingly onerous health and safety regulations which now classify wine production as an industrial rather than agricultural enterprise… no mean feat. Tasting highlights included a fine 2003 Pinot Noir Les Neveux – one of the more creditable reds we sampled during our stay – rich with soft ripe tannins (very of its vintage) and vibrant raspberry pip fruit.

After an excellent lunch at Restaurant Taverne Alsacienne in Ingersheim (cabillaud sauvage with new season asperges blanches), we made our way to Domaine Josmeyer in Wintzheim. Founded in 1854, this estate produces some 200,000 bottles from 26ha of vines, 5ha of which are classified as Grand Cru. 70% of their production is exported with just 25% retailed in France. These were without doubt some of the most impressive wines we tasted, with intense varietal expression across the range. The highlight was a 2000 Riesling Grand Cru Hengst with archetypal minerality, concentration and poise. True to the house style, their 2000 Gewürztraminer Archenets was particularly noteworthy for its emphasis on spice, with notes of clove and mace framing the pungent rose and lychee fruit character with aplomb.

Our visit to Domaine Rieffel the following day saw our first trip out to the vineyards and a chance to put the familiar names of Zotzenberg, Brandluft, Gesetz and Wiebelsburg into context. After the chocolate-box frippery of Kaysersberg and Riquewihr, Mittelbergheim and its spectacular setting in the lee of the Vosges was a taste of the real Alsace, an impression no doubt bolstered by the first sunshine of our stay. The gently sloping, south-east facing Zotzenburg vineyard was a lesson in the importance of aspect in this part of the world, with Riesling, Gewürztraminer and Sylvaner all doing well here on mixed soils of calcaire jaune and clay. Madame Rieffel encouraged us to engage in some ébourgeonnage – stripping growth away from the trunks of the vines – before taking us to see Wiebelsberg where the characteristic pink sandy soils on a steeply-pitched slope give leaner Rieslings.  Their 2007 Riesling Zotzenberg Vendage Tardive was a memorable example of the late-harvest style with tarte tatin fruit balanced by liminal acidity. 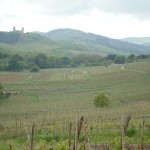 After another helping of new season asperges blanches (paired with Muscat of course) our final trip of the stay was to Domaine Ostertag in Epfig. André Ostertag’s 14.5 ha split between over 100 parcels produce some of the most sought after wines in Alsace and a trip to his 2.3ha holding in Muenchberg (‘monks’ mountain’) certainly endorsed his philosophy that behind great wines are great places.  The Ungelsberg summit casts a long rain shadow over this south-facing, natural amphitheatre where mixed soils of red sandstone and volcanic sediment produce richly-textured wines from 75 year-old vines. Just as in the Haut-Rhin, the cold winter and spring has retarded growth by up to a fortnight this year and André explained that the heavy rain of the last few days was welcome given the lack of moisture-retaining clay in these parts. 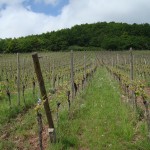 André’s aim is to go beyond the relatively simple exercise of balancing acidity and sweetness which can preoccupy Alsatian winemakers and make wines of real character. For his Pinot Gris, this translates into barrel fermentation in 228 litre barriques coopered, in Burgundy, from 100% Vosges oak. His 2007 Zellberg Pinot Gris was a case in point, with perfectly balanced fruit and sinew. The focus on terroir at Domain Ostertag extends beyond Riesling (a variety much lauded for its ability to express minerality) to inform all that they do, with André’s Gewürztraminer vinified ‘through Riesling eyes’ to produce a taut, concentrated style quite distinct from the heady and sometimes overblown wines produced from this grape. Excellent.

Not wanting to miss the opportunity to taste some German wine, we topped off our stay with a quick hop over the border, where lunch was accompanied by a fantastic local Grauburgunder from the volcanic soils east of Freiburg. A fitting end to four superb days in France which left us with an enhanced understanding of the importance of terroir and a lasting impression of Alsace’s unique ability to produce such a diverse range of wines in so many different styles.

One Response to “From Vosges to Muenchberg, Alsace”