While there’s much back-slapping over the quality of the 2009 harvest across Europe, here similar success has only heaped further pressure on the cellars of the Langhe, many fit to bursting after a dazzling run of ‘five-star’ vintages, from 1995 to the present day (bar 2002).

La Stampa, one of the leading newspapers (hereabouts at least), recently highlighted the issues now facing the producers: ‘Shrinking sales, rising production, confusing prices’ is how they led the piece. The global crisis and appreciating euro have certainly dealt the region a blow, as evidenced by a 40% fall in the bulk price of Nebbiolo (2005 vs 2004 vintage). I’m told that where once a top mark in Wine Spectator would have emptied the cantina, the sea of ‘stunning’ scores now spilling from every quill have left the consumer anesthetized…should that be ‘dazed and confused’? Or have they wised up, now seeing a ’95 pointer’ as simply five out of 10. Who knows? 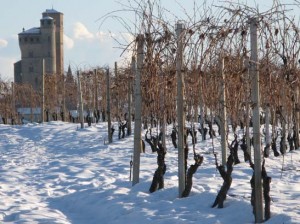 Growers might be forgiven for not forecasting the effects of global warming in delivering abundant fruit year after year. Nor could they foresee that those with their hand at the helm – the politicians – would opt for a vote-winning passage, encouraging the regrafting of unfashionable Dolcetto and Barbera to Nebbiolo, sending annual production soaring to 11 million bottles from only six million a few years back. ‘Ma dai’ you cry! At (wine) school we were taught that Nebbiolo for Barolo or Barbaresco was only planted in most favourable sites; certainly not on those north-facing, snowy slopes beloved by Dolcetto. Now it’s fine to plant wherever you like, even if it is in a valley bottom frost trap where once stood a healthy hazelnut grove. Perhaps all Nebbiolo below a certain altitude should be labelled as ‘Langhe Nebbiolo’ to dissuade such carry-on?

Climate change looks to be changing indeed the way wines are made too as producers shift from fashionably ultra-low yields, surmaturity, rotos, barriques etc giving port-like wines (thought to seduce journals, non?) that defy their ‘table wine’ status – undrinkable as well as increasingly dear to import – to maximum permitted harvests and back to traditional slavonian botte in an effort to keep the alcohols down and the wines trim (slavonian botte are more reductive ageing vessels, you may recall). But then the markets are saturated and there are only so many days in the year in which to market one’s wine, divorcing growers from their vines, hence needing consultants etc… That’s my take anyhow.

In former times of trouble, top estates ‘enjoyed’ the option of clearing their cellars of fruit by passing it on to the local cooperative, who’d blend it away anonymously. Now it seems that particular door has been closed as these same cooperatives boomerang the fruit back, so-to-speak, repackaging it into something enticing for hard-up restaurants and shops who once bought the real McCoy from the cantina…. Even second labels have not solved the problem, perceived as being neither fish nor fowl to the market; ‘ne carne ne pesce’ as they say here.

I’m sure you’ll be relieved to hear that my boys are lapping up their school lunches; just as well given the continuing, global warming defying freeze not seen for a decade. Not so long ago Nicholas would take one look at his English platter and cry ‘fowl’, forcing his mother to cobble a sandwich together, only for it to be still there at school’s end. So is this phenomenon – Nicholas’s unprecedented craving for school dinners bit – is down to Italians’ live to eat mantra (not eat to live), the effect minus double-digit degree days are having on his appetite, or more simply that (his) parents pay £4 per meal (the menu today being gnocchi in tomato sauce, roast turkey, and fresh fruit now you ask)? And just to make sure the grub’s up to scratch, the local restaurant’s drafted in periodically to sample the fare. Jamie Oliver would be dead proud.