Just back from Bordeaux where I spent a few days assessing the nearly harvested 2009 vintage. I also took this opportunity to look at newcomers that might be included into the Berrys’ portfolio.

Over the three days there were no clouds to be seen the temperature was a steady 28 degrees. It has to be pointed out that the weather in Bordeaux (and the rest of France) has been text book, with the fruits being the healthiest I have ever seen. When tasted, the berries are extra ripe and even the pips are mature. All the ingredients of a good vintage look to be in place. 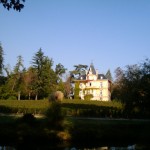 First up was the little oasis that is Carmes de Haut Brion. In the 16th Century this property was part of Haut Brion and was kindly donated to the monks in order to pay for the owner’s right of passage to heaven. It is one of the smallest estates in the left bank of Bordeaux and together with La Mission and Haut Brion is now located in town. The Furt family now look after this beautiful estate and the level of their dedication is starting to pay. The wines are wonderfully Pessac, very minerally and fresh but with enough power and structure to last for decades. The small estate only produces 2000 cases which sell out every year to small amount of dedicated aficionados.

Away from Carmes with their troop of 10 pickers to the all mighty Ch. Mouton-Rothschild with the jaw dropping team of 550 pickers. The logistics needed to orchestrate such a massive workforce is beyond comprehension but seemed to be perfectly tuned under the watchful eye of manager Herve Berland and winemaker Philippe Dhalluin. After re-tasting the wonderful 2008 range we headed for lunch with the pickers. I was fortunate enough to be sat next the wonderful Baron de Rothschild and opposite Philippe. I was fascinated to hear that both had rarely seen fruit as perfect as this year and to see the excitement on their faces made me understand that we might have something special here. After lunch we were whisked away to see the new Bordeaux craze, the optical sorting table… The amazing machine replaces up to 20 people on sorting tables. It takes 30 pictures a second and analyzes the shape of the berries, their colours and any unwanted snails and it then expels them with a micro jet of air …truly amazing. 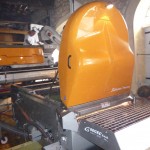 Off to see the much talked about new winemaking facility at Cos d’Estournel. The very charismatic Jean Guillaume Prats received us with a great smile on his face and showed us around the miracle of technology that he has created. The emphasis is on simplicity and minimal intervention. The fruit preservation is the key to his new system. He said: “All we have done is to use technology to minimise intervention and any damage to the fruit from the moment it is picked, to the fermenting vats. Looking at the quality on the fruit coming in I cannot wait to taste he wine in April next year.”

From there a quick stop at Ch. Latour to ask Director Frederic Engerer his feeling about the vintage and quickly to Ch. Margaux to meet with Director Paul Pontallier.  Both much respected men in Bordeaux agreed that it is still early and there is still plenty to do but if all goes well, with the quality of the fruit we might be looking at a very good or even a great vintage. 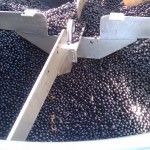 In the evening I met for dinner with the very influential Emmanuel Cruse from Ch d’Issan in Margaux. We tried his wonderful 08 and looked at the outcome of their 09’s. Unfortunately the weather wasn’t so kind for them as this was the second year in a row that they had lost a big part on their crop to May’s hail storms. The reminder on the crop is extremely healthy and will very probably turn into one of Issan’s best ever vintages … not much will be made so we will keep an eye on this one. 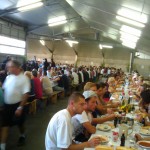 On day two, I was privileged to be invited to the tasting of the year at Ch. Lynch Bages. Jean Michel Cazes, his Sister Sylvie and son Jean Charles, who is now in charge of the property, together with some of their very talented staff, had invited me to a vertical tasting of 36 vintages going back to 1959. Jean Michel gave us lots of colourful anecdotes which made this experience unforgettable. Without boring you with all the tasting notes, I think the reason Ch. Lynch Bages is such a successful global brand is because of the dedication of the staff over the years for making one of the most consistently delicious wines in Bordeaux.  To prove the point, some of the most outstanding wines of the tasting, aside from the obvious, were 66, 84, 91, 93. The moral of the story is… buy Lynch Bages every year, you will never be disappointed!

In the afternoon I quickly dashed to Ch. St Pierre in St Julien. This estate is one of the region’s best kept secrets and produces only 5000 cases a year. Definitely one to watch. In fact, if they produce a fantastic 2009 they will definitely be part of our En Primeur offering.

From there I drove a few hundred yards down the road to see Jean Hubert Delon at Ch. Leoville Lascases. The harvest was coming in thick and fast and was so healthy that even their new optical sorting table (another one) could not find anything to reject. Jean Hubert kindly opened some 2007, which was wonderful, and also the most amazing 2000.

Finally, I went down to Ch. Palmer to meet with Director Thomas Duroux. Thomas is one of the most refreshing Bordelais having worked in California for Mondavi and most importantly making Masseto in Italy. His enthusiasm and breath of international experience is slowly giving Palmer the edge on the competition, making it one of the most desirable wines in Bordeaux. We had a quick taste of some freshly squeezed Merlot, just harvested by 150 Danish students shipped for the occasion every year. You can feel Thomas’ brain working with excitement as he showed us some of his latest experiments… unfortunately I cannot reveal what they are but gosh wine making can be fun!

Just a final word on the 2009 from the technical director, Daniel Llose, of Lynch Bages … “ca peut etre grand” … This could be great….!