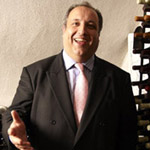 I was brought up on Rioja, holidaying on the Costa Blanca every year.  My father would spend hours in the local bodegas truffling through their seemingly inexhaustible range of old Reservas and Gran Reservas.  Bringing back wines from the ’40s to ’60s for what seemed only a few hundred pesetas and trying to educate me on their merits and nuances.  Oh and not forgetting how well they went with fresh crunchy bread, manchego cheese, roasted red peppers and garlic and wafer thin slices of Serrano ham. Now, don’t get me wrong, he was right and I really enjoyed that style of Rioja; light, elegant, creamy, oaky but it did (and still does in many Bodegas) lack fruit and I have tended to shy away from them for many years. UNTIL…

…Two weeks ago I was lucky enough to be having lunch with my wife, a great pal and his wife in Akelarre restaurant, overlooking the stunning foodies Mecca of San Sebastian in Northern Spain. Over the duration of this magnificent 10 course degustation menu we took turns picking off their extensive and not unreasonably priced wine list. We had some famous names and “oooohh” and “ahhhhhed”  our way through them but it wasn’t until our host said we had to try the 2001 Contino Viña del Olivo Rioja that I was blown away. I had never heard of this single vineyard gem but its cool, clear concentration of precise blackfruits had me seduced after the first quaff. Its quality level is that of the second growths of Bordeaux but what’s magnificent for me is that it doesn’t taste like any other region but Rioja – but Rioja that’s on steroids.

I was somewhat surprised and actually far more embarrassed when, on my return, I was “banging on” about my “amazing discovery” to my colleagues, when they announced that we’d been “doing it for years”.  Finger on the pulse! In my defence we only get 13 dozen a year.

Sadly we don’t have any 2001 left to drink now, HOWEVER I tasted the 2005 Contino Viña del Olivo Rioja with Sunday lunch yesterday and it’s just as good (might end up being a smidge better) but needs a few years, of course.

I’ve bought a case and I won’t pull another bottle until 2011, but it will be glorious for 10 years beyond.

Tad pricey for Rioja perhaps but this is NEW style, expressive fruit, sexy Rioja and worth every penny.