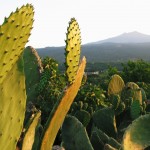 I had been meaning to explore this eastern Sicilian volcanic site for many years (see Mt Etna, left); ever since tasting one of its Etna Rosso wines, a blend of indigenous Nerello Mascalese and Nerello Cappuccio almost a decade ago. The wines shone brightly then – starfish among a sea of irrigated mediocrity – as they continue to do now, but brighter still. And how apt that this goal should be realised only when I had based myself in Piedmont, whose royal House of Savoia once lorded over both provinces in tandem; indeed the most revered enological school remains in Alba. And surely it wasn’t pure coincidence that the twisty, turny road to the region should boast the villages of Novara, Castiglione, Nunziata and of course Piedimonte along its way?! 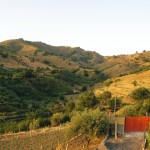 They say that one picture tells a thousand stories. One such black and white photo hanging in one of the oldest cantina, Benanti, taken long ago, shows the slopes of Mt.Etna clad with vines; for this was a time when the region was prized for the quality of its Nerello grapes, which tasted blind combine the qualities of Pinot Noir and Nebbiolo. So much so, in fact, that until the late 1970s even much of the production was shipped out to bulk out the then flaccid wines of Barolo and Burgundy. Post War the new Republic put paid to this thriving export industry, dividing up the estates among smallholders ill-equipped to maintain the vineyard terraces; now largely left abandoned (see right). 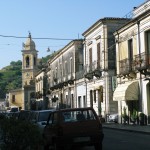 Fifty years later the smallholders are back, eager to resuscitate the fortunes of this spectacular region; albeit one that only occupies approximately 300 hectares (and growing). So if you’ve cash (and time) to invest, it’s time you fly down to Linguaglossa (left). For since 1999 the EU has funded new winery developments to the tune of 50%, making the £50,000 cost of a single, terraced hectare much more appealing. The option runs until 2013 so book now to avoid disappointment. 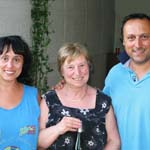 growing band of professionals with a taste for the finer things in life, all bent on producing something truly great. There’s Rosario Pappalardo and Alice Bonaccorsi at Valcerasa who, since 2000, have had a fascinating union of Alice’s vineyard-owning family from Piedimonte and Rosario, whose mariner ancestors once shipped the wine out of Riposto just up the coast. Young author Chiara Vigo at Fattoria Romeo del Castello published her book on the history of labels painted by famous artists ‘Arte e Vino’ in 2007, just as she took up the trowel. Also, one time teacher and Catanian pianist Giuseppe Russo (right, with his family) has risen to the challenge at Giralomo Russo since 2003. Further south the Biondi family at Trecastagni have been ‘vignaioli’/grape growers since 1900, selling everything in bulk; that is until son and architect Ciro broke with tradition by bottling their wine for the first time in 1999 and completing his new cantina in 2007. Meanwhile erstwhile Milanese banker Alberto Graci has returned to his roots with a point to prove, buying prime land in 2004.

On top of which there’s a posse of outsiders cashing in on the region’s potential for growing excellent fruit while availing themselves of the sweetners being handed out. This group includes the likes of Belgian wine broker Frank Cornelissen and fellow countrymen and art dealers Filip Kesteloot and Trente Hargrave (Terre di Trente), while Marco da Grazie (Terre di Nere), Silvia Maestrelli (Tenuta di Fessina) and Andrea Franchetti (Passopisciaro) are all Tuscans. They bring a sense of perspective and commercial know-how. 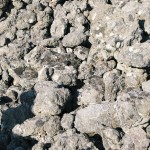 But what, you may ask, makes this place such a magnet?  To (mis) quote Bill Clinton: ‘it’s all about the terroir, stupid’. The terroir in question rings the slopes of Mt.Etna like a embroidered necklace; in the north around Passo Pisciaro prized terraces at between 600 – 2000 metres lie on well-ventilated rocky black nutrient poor, free draining volcanic lava (left) that heats up and cools down giving a 20 degree diurnal shift. The eastern slopes around Milo share a more restricted exposure and are shaded from the afternoon sun (so good for white grapes), yet boast more vertical vineyards and a better view of the Mediterranean, while those in the southern zone at Biancavilla are hotter still and less coveted.

Vintages seem to vary significantly. Winter snow is common, hail threatens most years and summer temperatures of up to 40 degrees bring a risk of wild fire.  Rain, when it starts in late autumn, can apparently set in for days on end, triggering rot. There is consequently a tendency for growers to pick during the first half of October guaranteeing an ample crop and decent acidity, but this tactic also brings with it greener tannins/phenols – perhaps not such a problem if you rely on micro-oxygenation!

The terroir is expressed through the trellising systems. Seventy-year-old vine terraces 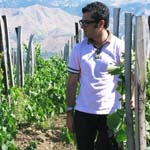 are populated with dense free-standing, single-post ‘alberello’ systems, a la Romana, at approximately 8,500 plants per hectare, while the new vineyards are increasingly trained on modern ‘spalliera’ wires in rows. The advantages of alberello lie in their lower yelds, better quality, a more natural inclination towards the sun (viz. biodynamics) and their affinity with the best, most precipitous sites; the downside being the cost of alberello vineyard management.  Spalliera wire-trained vines are less dense, easily mechanised and produce more; they also apparently generate more disease pressure etc.. Some like Alberto Graci (above right) have applied the best bits of the alberello system to a spalliera wire/row layout. Old vine plots are planted ‘selection masale’ (uncloned) on ungrafted roostock; newer sites ‘il contrario’. 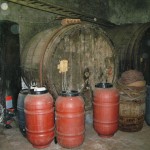 From ‘alberello’ to ‘albero’(tree), chestnut has traditionally been used in the region to make large botte (left), but the wood can be resinous if poorly cut. French barriques have been largely adopted by the new ranks of artisan producers; a matter of logistics and fashion. Yet Frank Cornelissen is planning, with others, to give chestnut botte another chance – as if the amphora used for ageing his top wine wasn’t traditional enough! So here, as in Piedimonte, the shift in thinking back to larger barrels has begun…

And so to the wines: Nerello Mascalese ‘in purezza’ produces a distinctly finer red than chunkier cousin Cappuccio, yet both are often blended together as Etna Rosso DOC (since 1968), often with a fair percentage of white varieties (Carricante, Catarrato..). As with Nebbiolo, Mascalese is a vigorous vine with long, compact bunches of fulsome berries blessed with fine acidity and firm skins. The style of Nerello Mascalese sits somewhere between Alba and Beaune; perfumed, raspberry, minerally red fruit; the palate refined, lacy, cherry stone fruit, cleansing acidity and fine tannins; enough structure for 10 years’ development. The whites, if not lost among the Etna Rosso blend, are led by Carricante and Catarratto grapes. Most estates favour the proverbial, if dull, dry white wine style, while the more courageous are, to my mind, reaping greater rewards 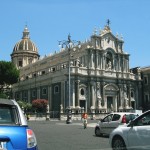 One thing before you rush to buy your ticket down to Catania (right): please bear in mind that Mt. Etna last erupted in 1981, cutting a molten scar down through the vineyards. And it’s been smouldering ever since…so perhaps not so magma-ficent after all!

Next week: More Tales of the Unexpected.