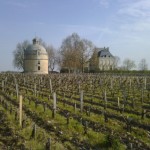 I was utterly bewildered when I sat down to see Robert Parker’s scores the other night!  If you’ve been following our progress in Bordeaux then you will know that we were genuinely surprised by the ’08s – some of the wines we tasted were excellent and many surpassed our expectations.  But the blunt fact of the matter is that, on the whole, this vintage was not legendary, exceptional or outstanding – it is simply surprising.  Yes, there were some gems, but it was patchy; the now infamous weather during the vintage has still left its mark, and only those with nerves of steel, who risked everything on cutting back their crops and waiting for those last days of Autumn sunshine were rewarded with remarkable wines, and few would deny that.  The success of the campaign relied on the chateaux getting the prices right and it’s been encouraging to see that those who have released their prices, for the most part, have been sensible.

However, Parker has deemed 2008 as ‘a notch below 2005, but it is better than any other vintage of the last decade except 2000’ and, as a result, certain wines are rocketing in price and are jeopardising the whole 2008 en primeur campaign, which was shaky at best in the first place.  My belief is that it should be the market that dictates the price, not Parker.

We respect Parker as an independent critic but he is only one person and he has been crusading, virtually on his own, with his opinion being  poles apart to almost every wine journalist and wine merchant on 3 of the last 6 vintages and we simply don’t agree with him. In 2003 he rated this huge, hot vintage as astonishing as the rest were perplexed to find finesse. In 2005, where the entire wine world hailed it as legendary he was initially lukewarm. Now it’s the turn for 2008 and we see another electric review in the face of all other wine professionals and even the Chateaux themselves.

To the point of the”release of the scores” the campaign was going far better we had ever hoped with so many chateaux dramatically dropping their prices to ensure “drinkers” get back into the market even the mighty First growths. I can only hope the properties yet to release their wines prices will continue in the same, sane way their peers had done up to “Crazy Tuesday”.

Its a great shame that this Mr Parker doesn’t adhere to his name sake’s code:  ” With great power comes great responsibility ” Peter Parker aka Spiderman !!

. Sign up now, it only takes a few seconds and it’s free.