Nel vigneti (among the vines) 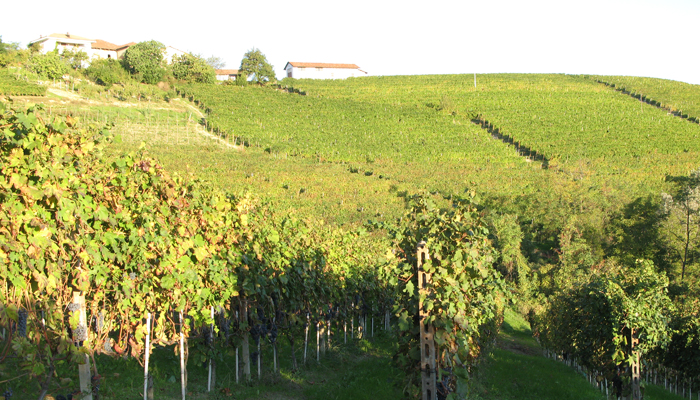 Bright sun and a warming breeze was all the encouragement a fair-weather lackey  needed to swap the pen for the secateurs. Alas it wasn’t to be. All togged up in my choicest gear, complete with hiking boots, the boss/il capo effectively left me on the bench as I watched a pair of seasoned Macedonians dominate the set pieces. Still, I was left in no doubt as to the mercurial talent of Giovanni Rosso’s rattling 4×4 Fiat Panda; thirty years old it may be, yet it remains as nimble as ever among the vines and not short of pace…

I notched up my first run out soon after. This time I was under the watchful eye of Luca Sandrone, younger brother of Luciano; so much younger in fact, twenty years or so, that he appears to have lucked out on a full name. But what he lacks in letters, he makes up for in application. Luca is Sandrone’s secret little weapon; he’s their viticulturalist and boy is he good. Meet Barolo’s Mr Incredible; for who else bicycles 16,000 km a year; runs the infamous Barolo to Alba road in all weathers, even during his lunch break, and personally oversees the collection, delivery and spreading of the priceless Castelmagno cow dung?

But back to the vineyard. Picture it: there I was, muck spreading cow dung on Cannubi Boschis in thirty degrees of heat, flies all around me, while a team of Romanians kept repeating ‘how do you do’ and singing tuneless Beatles’ songs. It was only a matter of time, in no time in fact, before the relentless ditters forced me to take an early shower. Meanwhile you know who, yep Luca, continued to chew gum and dig dung trenches; his single diamond ear stud glinting in the sun.

Ear studs I can handle, tongue ones even; German Shepherd dogs ‘no thank you’. I can just about shrug off the one that berates, or should that be ‘scoffs’ my morning walk to work. But imagine my delight on meeting a bearded owner of two, complete with Tom Jones ringtone!

As way of finale I was home again to host a Marcarini Barolo Dinner of all things. And how honoured that Manual Marchetti’s delightfully demure wife Luisa, Signora Marcarini, should choose this event of many to make her virgin voyage to England! The shutters may have been going up all over London ahead of the G20 funfair but there was no hiding the Marcarini Baroli. Initially all were wooed by the fuller, cocoa powder and balsamic brilliance of Brunate; so named after the Piemontese word for frost, ‘brina’, such is its continental mesoclimate. While the flightier, incense, tobacco and curried verve of La Serra, from a warmer if loftier site – La Serra is Italian for greenhouse as well as being the highest point – wove its magic as the wines opened up. So a delicious pair of 1999s, ten years off their best, were put in their place by a fine, fresh 1997 Brunate and a graceful 1994 La Serra. Benissimo!