Notes from the Loire… 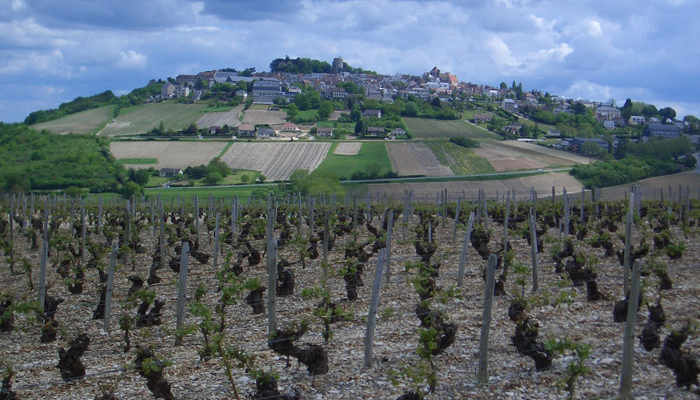 I’ve just got back from a week on the road (by boat next time surely?) spent reviewing the calibre of the 2008 vintage, one skewed by April frost in the west & June hail in the east.

It also proved a fine time to tap into what’s going on round the edges, especially against a backdrop of chic Kiwi competition & how the ‘home’ of Sauvignon Blanc in particular (notably Sancerre & Pouilly-Fumé) & the Loire in general is responding.

Little joy for Muscadet’s crop of sunny ‘coquille’ wines that were pared back 50% by frost. Yet between the vines the tunnelled ‘mache’ & ‘muguet’ salad farms continue apace supplying most of Europe with floppy-eared rabbit food…shame though they have to rely so heavily on the river Loire’s resources of water & sand (have they not heard of the plight of the Murray Darling?). Good to see Château de la Jousselinière making the most of their old, granitic vineyard Clos de la Chapelle; emphatically oyster-like & full at no great extra expense.

It appears the traditional practice of aerating the soil with a ‘dent’ or tooth, known as ‘sous-solage’, is being challenged by a radical new Brazilian approach called ‘semissur’, or somesuch. Apparently it goes something like this: young French farmers, evidently just back from the Coco cabaña, have decided collectively to ‘jete le chariot’ & refrain from getting their hands dirty. They’re relying, not on the EU for once, but on the action of the plant’s roots to break-up the soil naturally. That way they avoid compaction of the vineyard surface while freeing them up to fine tune their samba.

Savennières’ reputation as Chenin Blanc’s most promising incarnation is in the throes of a gentle revival. According to Domaine du Closel: of the 130 hectares planted nearly 70% are now owned by non-Savennièrenois, no doubt forcing the pace of this hitherto sleepy enclave.

Indeed part of the famous but tiny 10 hectare Clos du Papillon vineyard has been sublet to two new kids on the block: Stephane Branchereau of Domaine des Forges & Florent Baumaud of said property. Even after a couple of vintages one can sense a new lease of life emerging; one encapsulated by the small but exciting 2008s.

The question of copper toxicity in the soil has been gnawing away at environmentally-conscious buyers (& perhaps consumers too). As the last line of defence for organic & biodynamic producers, its application has led to renewed concerns over its effect on the health of the soil, quite apart from impeding the vine’s ability to photosynthesize. Stephane Branchereau shares this view while Noël Pinguet of Gaston Huët, a biodynamicist since 1990, suggests that their use of 2kg per hectare spread over ten years amounts to precious little; he also points to copper as an important oxygenator, bringing life to the soil. Others in the know have mentioned that it assimilates more effectively when bound with sulphur (as the famed ‘Bordeaux mixture’). Surely though, a healthy & strong soil ecosystem as sought by organic & biodynamicists is more resilient to such treatments, just as with the human body.

The welfare of the Loire’s less fortunate Cabernet Franc grape has been vexing the I.N.A.O. (the Institut National des Appellations et Origines) triggering a programme aimed at reviving its fortunes & those producing Chinon, Saumur-Champigny, & Bourgueil in particular. Compared to its forthright & over-bearing ‘cousin’ Cabernet Sauvignon, the Franc requires a subtler hand on the tiller; one that will conjure up its violet scent & lacy refinement. Cheval Blanc, Vieux Château Certan & Figeac have understood this over the years, as have the likes of Domaine de la Chevalerie in Bourgueil, whose preference revealingly is for cooler seasons of 2006 & 2007 with which to capture the grapes essence, as opposed to the balmy 2005. Word has it that Touraine Sauvignon Blanc is next up to receive a makeover.

I was surprised to learn from M. Pinguet of how reliant the Vouvray appellation is upon Crémant de Loire; accounting for approx. 70% of its production. Little surprise therefore that 90% of the Vouvray’s harvests are gathered by machine, which in turn necessitates a more zealous approach to sulphuring of the battered fruit through to bottling. This is a recurring theme across the Loire: balancing commercial reality with potential prosperity (for one & all). I look forward to welcoming M. Pinguet to Berrys at a spring 2010 tutored tasting to explain his viewpoint.

The threat posed by 11, 000 hectares of Marlborough Sauvignon Blanc seems a long way away from the minds of the Nevernais (therein lies a clue?) & their 5,000 hectares of Sancerre & Pouilly-Fumé; whom I sense feel shielded by the strength of their ancient brands. However all too often during my visits I came away with the impression that their precious asset, the fruit of their hallowed Kimmeridgean clay terroir was being compromised to make ends meet, to hit volume requirements; quite right! you might say given the current ‘crise’. But then it’s not unheard of for prime vineyards in the mould of Les Monts Damnés, Le Chêne Marchand & La Mouassière being machine harvested, vinified & lumped together as generic Sancerre or Pouilly; their bloodlines & competitive advantage blended away. The result is a far cry from one of the most exciting wines sampled en-route: a twelve year old, hand-harvested, single-vineyard, wild yeast fermented, non temperature controlled, with three grams of beautifully balanced residual sugar gem that oozed class & personality…something sorely lacking among too many of today’s crop.

One Response to “Notes from the Loire…”