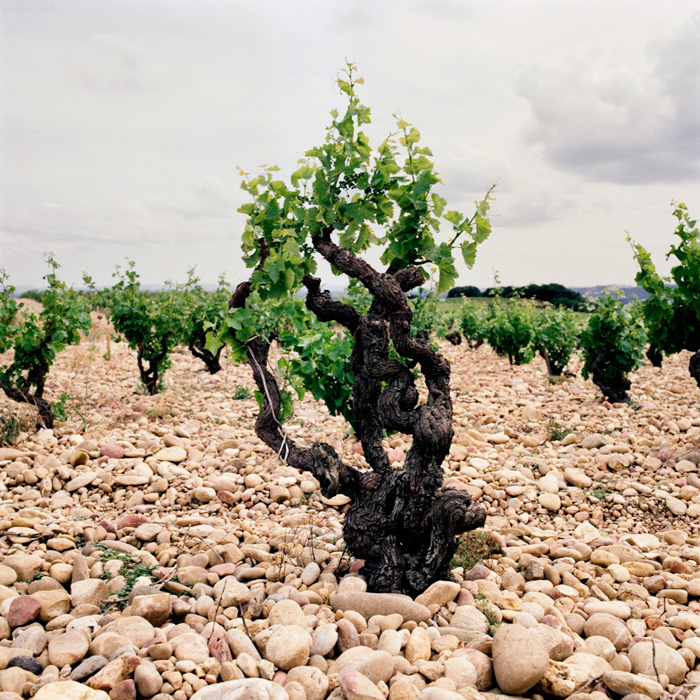 In the midst of Rhône 2013: En Primeur, Damian Carrington – Agency Director – allows his mind to escape the English weather and drift to Châteauneuf-du-Pape.

On a cold, midweek morning, I think we can be excused a day dream or two on the way to work (or perhaps even – when no one is looking – at one’s desk). As I fought with my umbrella, trying desperately to maintain some semblance of dignity, and dryness, my mind turned to a perfect visit to the Southern Rhône in September of last year.

The trip had been inspired by a much prized invitation to attend the Decanter Men of the Year celebration hosted by the Perrin family at Château de Beaucastel, to honour Jean-Pierre and François Perrin who had been awarded the title earlier in the year. Even in the wine trade though, you can’t just whizz off to the Southern Rhône for a party, so we carefully crafted our itinerary to include two other great Châteauneuf-du-Pape properties (Clos des Papes and Domaine St Préfert) and to taste the 2013 vintage.

Getting an appointment to taste with Vincent Avril at Clos des Papes is always something akin to winning the lottery; not because he is reticent or plays hard to get, but more that as a ‘one-man band’ he always finds it difficult to juggle the demands on his time. Vincent is very happy with the 2013s he has produced and we are very confident that all those who also get to taste this vintage will agree that he has made the very best of what was considered by many an extremely frustrating vintage. It was frustrating largely due to the ridiculously low crop, an extremely meagre 13.5 hectolitres per hectare in 2013, compared to what was already a small 18 hectolitres per hectare in 2012.

In 2013 Grenache accounts for an unusually low 50 percent of the blend with Mourvèdre and Syrah playing a much more significant role. This is good news in Vincent’s view, and ours, as he is a strong advocate of Mourvèdre’s spicy qualities and the structural backbone it adds to the wine. The 2013 Clos des Papes will be immensely enjoyable, its quality seeming on a par with that of his 2011, with maybe less power and a higher level of elegance. Certified organic, Vincent has remained true to his high quality standards and no expense was spared, even if that meant the loss of nearly 50,000 bottles in 2013. The result is astonishing and will warrant a good 10 years’ cellaring.

Our second visit was to the irrepressible Isabel Ferrando at St Préfert who again has proved that she is definitely on top of her game, and is one of the key players in Châteauneuf-du-Pape. Not one to stand still, Isabel continues to perfect her understanding of her vineyards which are located in the slightly ‘unfashionable’, southern part of the appellation.

Isabel’s wines are certainly more modernist that Vincent’s, offering an immediate and seductive appeal, but also unquestionable potential for aging. Isabel described how the 2013 vintage suited her style with its suave and smooth palate texture, as well as its vibrant freshness.

Finally, to the party. Greeted by a swing band, 2002 Champagne Pol Roger, wine royalty and over 20 members of the Perrin family, we were treated to a unique dinner in the chai at Beaucastel. It was a fitting celebration for Jean-Pierre and François who have done so much to raise the profile of the truly great wines from Châteauneuf-du-Pape and it was a great way to sign off a fabulous mini-tour.