Ebro to the Duero: Viva España 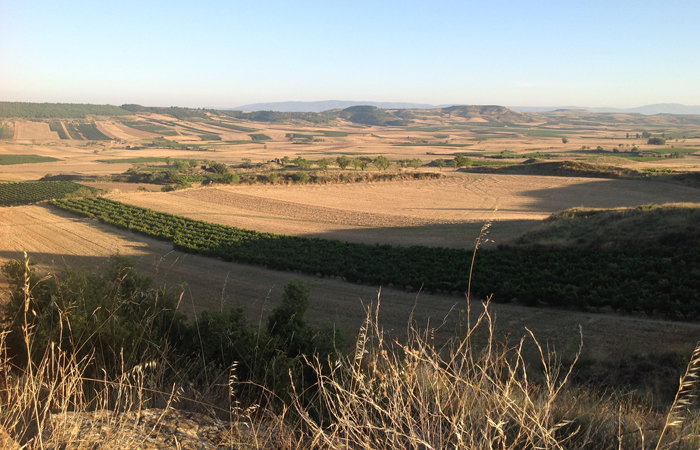 Laura Atkinson, a member of our fine wine team, travelled to Rioja to explore the difference between traditional and modern winemaking – and what that means for what’s in your glass…

This was my first trip to the vinous regions of northern Spain: we had two days in beautiful Rioja, the historical hub, followed by two days in Ribera del Duero. Both have a booming food and drink culture that is naturally and elegantly entwined in everyday Spanish life.

Bodegas in the fine wine areas of Spain are generally considered either traditional or modern which, in essence, refers to the methods and decisions that eventually determine how the wine will taste. What makes a Spanish wine traditional? The main choice to use American casks (rather than smaller French-oak barrels) creates the style we know as traditional Rioja. American oak is much less expensive thanks to the Spanish trade relationship with American wood used in Sherry production further south.

This historic training has established an exciting breed of traditional vignerons and unique new producers. From this trip I wanted to understand traditional and modern winemaking and how the Spanish can make so many distinguished, characterful wines that are full of regional personality; wines with the ability to show a sense of place and complexities akin to the greatest fine wines of the world.

When a winemaking area becomes a brand, then there’s a danger that the influence of that brand name can lead to bulk planting on any slope regardless of aspect, exposure or soil. I was pleasantly surprised with the sophistication in Rioja, which for the most part had a respect for the unique geography. Vines were planted for a reason with what felt like aspirations of quality. I did not make it to Baja, but the two Rioja A’s (Alavesa and Alta) should be taken most seriously thanks to their higher altitudes and unique geology. 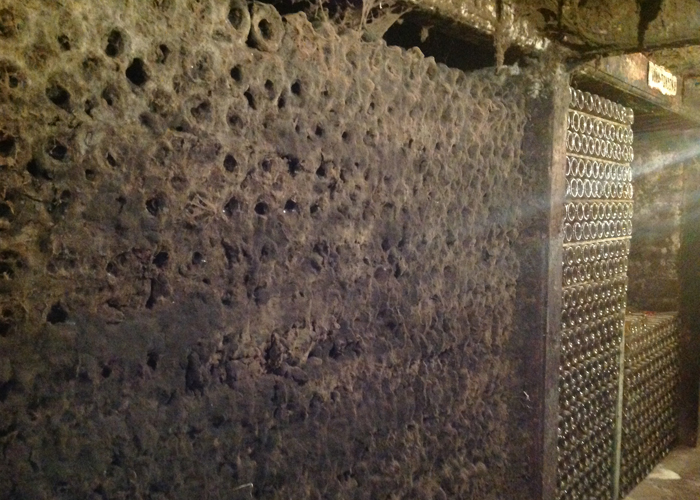 Have you heard of López de Heredia? If not, you simply must seek out the wines from this family-run bodega which was founded in 1877, during the dynamic decade which established Rioja as the world-class region we know. If ‘Traditional Rioja’ appeared in a dictionary, the definition would surely reference this winery, complete with a dedication to protecting spiders in the ancient cellars. Spiders are treated with total respect which was a concept difficult for my arachnophobia to comprehend. I didn’t make as many notes as I should as my tasting book became head protection from an enveloping canopy of cobwebs.

The López de Heredia family were actually the first modern producers in Rioja: when everyone else was planting vines on the mountains, they planted theirs in between a sweeping arch of the river significantly away from the hills, in their own protected area. However, since this modern start, the current generation (Maria José) has absolutely refused to move with modern times. Their wines are a true taste of the historic past and provided me with one of my most memorable food and wine moments to date. Picture this: plates of fresh home-grown tomatoes from Maria José’s mum, homemade boar chorizo from her brother-in-law, lamb chops cooked to perfection on an open fire in the vineyards and half a dozen bottles of mellowed white and red Rioja to taste dating back to the Seventies. Lunchtime spent basking in sunshine and rustic Rioja – perfection.

Another property that deserves maximum attention is the magical Estate wines of Remelluri in the hills above Labastida. Hermits had settled on the lavender- and rosemary-scented hills surrounding the estate and created vineyards to contemplate life and landscape in the 14th century, prior to a monastery being built as their sanctuary. Oh, what a spectacular home this must have been! The Remelluri estate is simply one of the most peaceful and beautiful in the world, making soulful, traditional and ecological wines under the influence of Telmo Rodriguez. Try to taste these wines: they are the best representation of Rioja landscape in a glass.

From a more modern perspective, I would like to introduce Finca Allende. Winemaking is in stainless-steel as much as wood, intensive pumping-over to extract colour, tannin and flavour then ageing in small Bordeaux-style new French-oak barrels. The wines are much more intense and powerful but less led by sweet fruit and spice from American wood. They work like a dream with richer, flavoursome dishes such as venison or the smoked and spicy peppers which you find in the local markets.

Let’s journey from the Ebro to the Duero River.

The Ribera del Duero area on the banks of the river Duero houses many famous bodegas that are carving a new vision as a fine wine treasure trove in Spain.

Like López de Heredia in Rioja, Vega Sicilia have their own unique way of making wines: old vines, low yields, Spanish and Bordeaux grapes and long ageing. The main reason for the individual style at Vega Sicilia is that they were a winery in the middle of nowhere for 120 years with absolutely no regional rivals. They managed to survive traditionally without having to compete with the Joneses (I am not sure of the Spanish equivalent?) until the area fashionably sprung into life in the Eighties. Ribera del Duero vineyards lie at higher altitudes in enchanting countryside with plenty of limestone, imparting mineral flavours. The risk of frost is much more common but summer days are warm and breezy. This circulation of air adds a coolness and purity to the fruit. Bordeaux varieties are more established in a Ribera del Duero blend and oak is not so rigidly American. These subtleties add to the detail here. 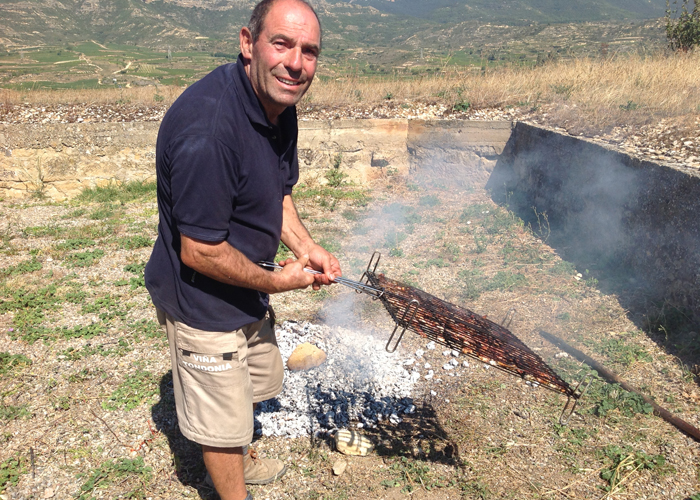 On the south-facing slopes opposite Vega lies Hacienda Monasterio, established in the relatively recent 1991 vintage. This winery embodies a Bordeaux concept: vines surrounding the property; a consultant winemaker as legendary as Peter Sisseck; French and Spanish grapes; Bordeaux casks, and parcel blending. The wines have a modern Spanish class and personality but without any traditional pomp or circumstance. Hacienda Monasterio is a well-judged bodega that embodies the best of both worlds, with wine that is consistently amongst the finest in Spain. We are delighted to welcome these wines to our range.

You now know the more traditional wines: the modern alternatives can be found throughout the region, and at one winery in particular – Pago de Los Capellanes. When you arrive at this winery you can instantly guess how the wines will taste; their modern identity is clear. Granted the winery looks more like a minimalist hotel lobby with its various shades of black than the home of fine wine production, that is your first clue. Next, rather than a standard vineyard tour, you are escorted to an impressive cinema to watch arty shots of landscapes and the vine cycle set to piano music composed by the owner. The place is immaculate, solid, well designed and sings of quality and cleanliness. The wines are equally clean cut, well designed and with maximum attention to detail. They offer a brighter, fuller and flavoursome version of modern Spanish winemaking. 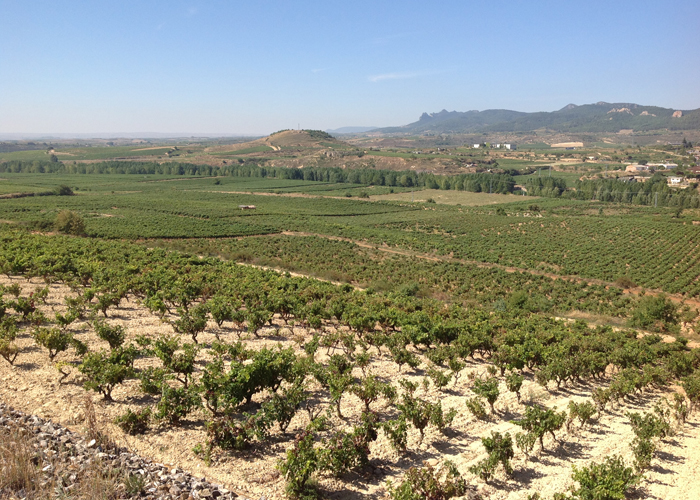 When it comes to white wines, the unique Viura is certainly distinctive and very food-friendly. Many examples offer white-pepper flavours and spices similar to Gruner Veltliner, the vanilla and buttery wood influence akin to Meursault in Burgundy. plus the peach and tropical vibrancy of whites from the Rhône. The producers which understand this style of blending white Virua with other local grapes to produce Rioja can make exceptional wines. The mix-and-match of characters create a special white expression of Spain.

So what happens next for Rioja and Ribera del Duero? The intelligent attitude of winemakers seems to be dedicated to making better and better wines with a human honesty, be that with a nod to the traditional or modern styles. The more producers who step away from generic winemaking recipes to carefully create wines that show specific vineyards and regions, then the more exciting things become for drinkers.

Traditional winemaking is no better than modern winemaking; there is much to learn from both. In fact the contrasting camps show the unavoidable and encouraged evolution of Spanish style, like nowhere else in the world.

Winemakers understand their responsibility to learn the details of the individual villages where the vines grow to create wines that does not dilute the message and history of these two infamous regions. There is so much history.

If you are not familiar with the vinous delights of Spain, then I’d thoroughly recommend you begin to explore its offering – you will be rewarded with affordable, glorious wines full of personality and a natural affinity to food. Viva España.