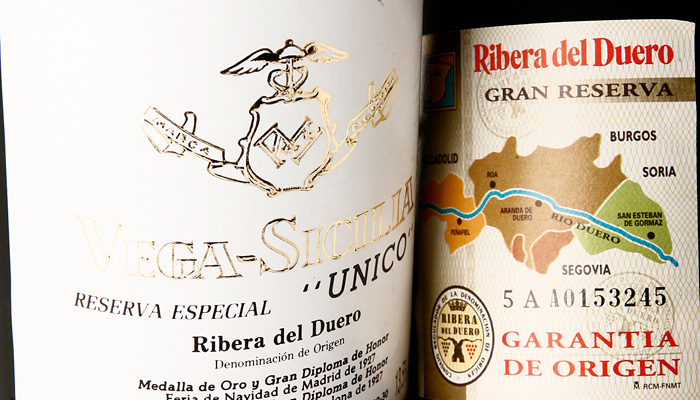 There is an aura surrounding Unico, Spain’s most aristocratic vinous offering. Unico is the flagship cuvée from Vega Sicilia and perhaps the most iconic Spanish wine available worldwide. An invitation arose to taste 26 vintages of Unico at The Square, Mayfair in a ‘vertical’ comparison with wines dating back from 1920 to their youngest barrel sample, 2005. This generous opportunity allowed me to witness the scope and style through the decades from this infamous property: what a tasting it proved to be!

Nestled in the Valladolid province in Ribera del Duero and following the course of the river, Vega Sicilia is a large estate of 1000 acres but with less than a quarter of that under vine growing Tinto Fino (Tempranillo) and Bordeaux varietals. Due to the estate size, there are 19 different types of soil to contend with alongside 140 large oak trees, 300 hectares of cork trees alongside pine nut production on the estate. With water in the North, woodland in the South and unsuitable quality soils further into the plain closer to the mountains, this means that Vega Sicilia has remained relatively consistent in terms of area under vine over the years. This does not suggest, by any means, that this winery is standing still with regards to their continued development; in fact, Vega Sicilia is constantly evolving, improving and learning.

The development and care from the Alvarez family into Vega Sicilia is rather wonderful to see, with big investments into their winery to affect all bottling’s after the 2010 harvest. Previously the grapes were split between 29 tanks, this has now increased to 81 tanks to help separate production plot by plot. Winemaker Javier Ausás explained that the vast and indeed expensive investment shadows a more Burgundian mind-set and mentality. The rather romantic picture he painted (excuse the pun) is to think of one shade of blue on an artist’s palate and then consider how this winery development allows for many more shades of blue on the spectrum. The precision available to the winemaker now allows for the ultimate and complete picture of Vega Sicilia to be painted from the grapes within each individual plot for maximum expression of Unico moving forward.

In brief, this winery is very special. The 26 vintages on show had been split into 3 collections: Phase 1 – Potential, Phase 2 – Style , Phase 3 – Randomness. Most were glorious and a little eccentric, others in a slight awkward stage but all breathtaking and unique while retaining the Vega Sicilia hallmarks. Unico is about insightful winemaking, vibrancy, complexity and elegance with very long aging potential. Why? Because the soils and origins create this style. Javier Ausás modestly stated that the wine is ‘born’, they do not have to work too hard at creating this classic and special character as it is naturally evident in their soils, their vines and throughout their long history.

Another reason for such potential with Unico is the acidity. Tasting the oldest wines from 1920 and 1925 (the colour of a well stewed cup of tea), they expressed a heart-warming character and brief glimpses of a former beauty. Most importantly, an incredible and impressive acidity shone through in both vintages. Wine does of course collapse at some point but vintages with maturity like this are almost similar to an aged Grandparent; the character and personality is still very much evident (albeit faded perhaps) but a priceless historical reference.

Upon tasting these wines, it remains clear that Unico is the ultimate Spanish premier cru. Now let me tell you about a few of my favourite vintages from the tasting.

Powerful and potent, this young beast will tone and tame in time and settle into a perpetual, layered and stylish wine with lots of weight, fruit flavours and subtle elegance.

A real sweet yet sour character packed full or aroma. This relaxes in the glass – must have patience here! A caramel character yet juicy with real bite and aromatic attack on the finish.

This is a wine to savour over an evening that will reward you again and again. Rich coffee and spicy nose with a dark, brooding mouthfeel. Constantly changing. Most impressive silky texture enveloped my senses with each sip.

A highly praised Unico vintage and easy to see why! Time hasn’t passed, this is still youthful. Sweet opulent blackcurrant and dark cherry with a marzipan and dense date finish. Acidity and structure faultless.

A super succulent nose that is wonderfully aromatic and complex. Completely ladylike and appealing, this is well presented, rather beautiful and with a womanly control, elegance and class.

Old yes but still interesting notes of balsamic, sweet spice and soft fruit. This wine has remained surprisingly dynamic and structured with thanks to the trademark Unico acidity.

For full tasting notes on specific vintages, please do not hesitate to contact me via email – laura.atkinson@bbr.com.