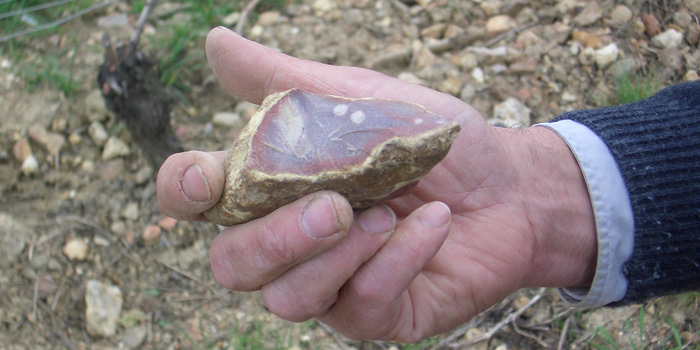 It was high time that Alain Cailbourdin made his debut at Berrys, having supplied wines to us since I first bought his 2002 vintage of Les Cornets. Here was an inaugural tasting that treated those present to a vertical of five vintages back to 2003.

But you have to go back the early 1980s for Alain’s first vintage, having bought the now 18ha domaine (120k bottles/annum) based in Malteverne. Unlike most of his neighbours Alain is a first generation vigneron; something I’ve always felt brought a fresh perspective to this most traditional of appellations; one that still forbids the grape’s name to be written on the label (Sauvignon Blanc…sshh!).

On the eve of the rugby World Cup final between France and New Zealand, Alain would need some deft moves to persuade the assembled throng that one of France’s most revered yet least known appellations still had the tutty-fruity Kiwi version pinned back in their own twenty-two…. And given the final result, maybe the tables are beginning to turn back in France’s (and Pouilly-Fumé’s) favour?!

Tasting his 2010, 2009, 2008, 2006 and 2003 wines left one in no doubt as to the quality and ageing potential of Cailbourdin’s wines.  Born of the 70 million year old (or was 120?!) Kimmeridgean soils the limy, linear wines of Pouilly-Fumé are clearly to Sauvignon Blanc as Chablis is to Chardonnay. Cailbourdin faithfully conveyed this through his three (out of four) wines on show: Les Cris, Les Cornets, and ‘Triptyque’; vineyards that have been spared herbicides and pesticides since 2005.

Vineyard Les Cris, derived from the french for chalk ‘Craie’, ‘thrives’ some of Alain’s (nutrient) poorest, stoniest soils; it smelt and tasted exactly that throughout the four vintages on display. The 2010 taut, pretty, intricate, nettly, white flower thing; frail you might say. The 2009 much sunnier by a yard; the 2008 almost at it peak, fuller and perfumed while the 2006 was fully mature and fading. Indeed Alain put the 2006’s lacklustred performance down to his dabbling with lower free sulphur levels in that period in response to (French) journalist pressure apparently (for more open fruitier wines younger); something that’s been corrected upwards since, thank goodness.

Côteaux Les Cornets by steep contrast, boasts a richer clay soil and better view west over the Loire towards sparring partner Sancerre on the other bank. The effect of this notably different terroir is a fuller, more profound wine, with flesh on the bones. 2010 compact and tight fisted; 2009 quasi New World in its richness; the 2008 was beautiful if still in its adolescence, still working things out; the late harvest 2006 approaching its prime, cool-headed, totally composed and true, drawing on its minerally deep soils to display an irrefutable picture of why Pouilly-Fumé is so revered.

Alain also makes 600 cases a year of a wood fermented and aged Sauvignon Blanc: ‘Triptyque’. Born in the 1989 vintage, it comes almost exclusively from the old vine ‘Les Renardières’ vineyard on the St Andalein rise; a unique piece of land on the Pouilly-Fumé landscape that boasts a large proportion of red flint, imparting extra power and profundity. Sensing this difference in terroir, and potential to age, Alain set out to complement these qualities. After all it’s the ‘weapon of choice’ preferred by François Cotat, Didier Dagueneau, Vincent Pinard… And to prove it Alain brought along a seamless 2003, one with power as well as grace, which contrasted sharply with the ‘crude’ 2009, 2008 and 2006…wines that need another 5 – 10 years to sort themselves out. Meanwhile Alain is evaluating in his mind which size of wood barrel is perfect for ‘Triptyque’; he’s moving up in size, from the ‘fashionably small’ (barriques) to something much larger nearer 10 hl, thereby reducing the micro-ox effect on the wine and limiting the vanilla wood flavours leached.

It all bodes well for Alain and his crystal clear wines, especially with son Loïc now working the vines. It’s also time to look forward to the 2010s, a promising vintage for Pouilly-Fumé whites characterised by a long growing season, yield reducing hail, a coolish summer and late harvest.