Back to Serralunga d’Alba, Piedmont for three years 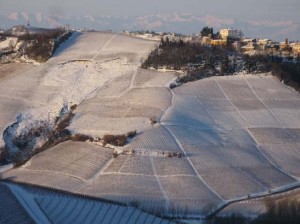 Yes I’m now back in Serralunga d’Alba after a two month sosta/break in the UK. Dare I say that I have come home? But this time I’ve returned with the family, now resident at La Casa Rossa. Spaghetti Western-esque we’d loaded the wagon (Fiat Doblo) with Christmas pudds, Fortnum’s biscuits and Berrys’ finest malt whisky and headed out across the Rockies/Alps to arrive in time for Capo d’Anno/New Year’s Eve, to a plate-full of cotechino e lenticchi (rich pork sausage and green lentils) at Alessio’s unico family trattoria, ‘Centro Storico’ in Serralunga, accompanied by a silky 1999 Rutherford Cabernet, Frog’s Leap and a sinewy 2001 Nebbiolo from Cascina Ebreo. Sated, it was now time to do battle with our wayward thermostat and dodgy wiring.

It’s amazing what you can find out from an electrician called out to fix an oven. It transpires that due to a lack of infrastructure Italian electricity is bought in from across the Alps. This imposes an automatic check on the country’s productivity and potential; hence the Italians’ ability (and necessity) to work the system. Each house has a limited amount of electricity before it trips (up). For example ours, at la Casa Rossa, is 3 kilowatts, so just enough to run a dishwasher or washing machine, but not both simultaneously! And guess what? The electrician also turned out to be the cousin of an accomplished Barolo producer…so, the oven now purring, he switched to viticultural quotas, and how Sicily was currently selling theirs to enable further plantings in Piemonte. 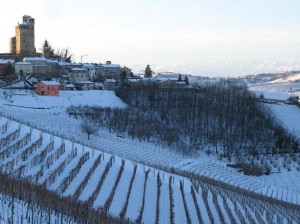 more about it …la neve, the snow of course. So I won’t go on about how Piemonte’s snowfall this year doesn’t quite measure up to last year’s, when there were metres of the stuff icing the vineyard slopes from November through to March ’09, paving the way for a very promising 2009 harvest. Let me just say that it augurs well for the coming season; the chill ensuring a crucial period of dormancy while the coming thaw will saturate the seams of calcareous blue marne, a source of sustenance over the months ahead for the three metre deep root systems.

The white stuff cruelly exposed one temperate Englishman, who floundered about with his snow-chains only to emerge some time later onto a now perfectly clear road. My Serralungese neighbours looked on with evident mirth as this right-hand drive, ‘targa gialla’ FIAT crunched its way slowly along the road.  Hadn’t I noticed that no-one does ‘snow-chains’ (quite like the Brits do); here they simply slip on a pair of (quilted) snow tyres and off they go!

Once I’d got mine I was finally able to deliver, not wine, but my children to school in 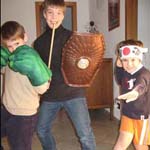 Barolo, plunging them in the deep end without a word of Italian. Nicholas, the eldest at 9, seemed to coast through his first morning (although he’s had kittens over what they’ll serve for lunch), while Patrick (6) faltered before giving a masterclass in the card game ‘Uno!’  They had both been introduced to my grocer friend Giuliana in the market, and to her rabbits; Patrick’s done the maths and at €4.50/kg, he’s keen to buy them all and so save the lot from the pot. Here they are (left), Patrick left and Nicholas centre, as they defend their corner. Try saying ‘Non’ to that bunch.

Before I go, two events not to be missed: Berrys’ inaugural Italian tasting at Vintners’ Hall on the 17th February, in the company of 20 producers; giving us a preview (an Anteprima) of the promising 2006 vintage; the second event, a four night tour, led by me, of ‘Barbaresco and Barolo’, of Palaces, Alba market, and culminating in a night at the Opera…again see Berrys’ Website for details and tickets.

Finally, I hear that some ‘viticultori’/winegrowers are grubbing up Dolcetto in favour of Riesling! They should be planting Timorasso instead, as Ferdinando Principiano is doing in Serravalle Langhe.

2 Responses to “Back to Serralunga d’Alba, Piedmont for three years”