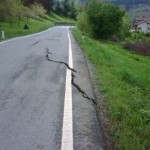 From somewhere – who knows where? – Papa Silvio summoned up funds to help not just Abruzzo’s earthquake victims (word has it that Chinese and American themed villages are on the table), but also those among the Langhe hills, marginally less traumatized by recent rains. For the rain, coming on top of unprecedented snowfalls this winter, led to slippages (see left), not just of roads but also vineyards. Some of the most famous Barolo producers, Luciano Sandrone and Elio Grasso to name but two, have seen decades of work washed away. Cost to replant: a (not so) cool £50k per hectare…but what price for 60 year old vines. So water-clogged has it been here in Barolo that even Lowly Worm and his mates were seen taking the overland route. Climate change at first hand.

Not that the Venetian wine producers are fazed, judging by the rows of irrigation pipes among even the most famous vineyards (see photo right). I always understood that vineyard irrigation was illegal in the E.U., except in extreme cases such as 2003. Yet certain Italian states, notably Sicily, Veneto, Friuli-Venzia-Giulia, have apparently opened the floodgates. And get this: even Piemonte are experimenting with irrigation. How do I know? I walk pass the said vineyard on my way to the office! What was it Napa’s John Williams said of irrigation at our recent Frog’s Leap Dinner in St.James’s Street: ‘one of the reasons why wine from irrigated vines have such (unnaturally) high alcohols is the vine’s natural cycle has been supplanted by water/nutrient dependency so distorting their ability to ripen properly; the result being dizzy alcohols as growers hang on till physiological ripeness is achieved.’

Sorry, back to Italy and the case of the Venetians; I’m not suggesting they’re blind to climate change but irrigation seems to be used as a way to pump up the yields, obviously, while softening the wines made by the region’s biggest cantine (who make the rules incidentally) while altering Corvina’s make-up to enable a faster, cleaner ‘appassimento’ (partial grape drying to you and me, prior to pressing and fermentation of Valpolicella Amarone juice). But why flesh out the fruit, only to desiccate it later on, when the vine does much of this job for you, and naturally so? And what of noble rot, key to Amarone’s complexity, and sought by the likes of Quintarelli, Marion, Corte Sant’Alda. A faster appassimento, ala Dal Forno and Grassi, would appear to stymie the grape’s ability to develop this important ingredient. And so on…still with me? 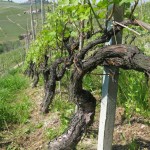 Time to ‘anduma a scarsur? i nebi?’ as they say round these parts; piemontese for ‘let’s go and shoot thin the nebbiolo’ vines, of course. First in one of Bartolo Mascarello’s oldest Barolo vineyards, San Lorenzo, where I adopted the praying position in front of a 60 year, 2 metre long, squid-like giant (see photo left); wonderful vineyard therapy – I should have been lying down you say? Dropped a couple of grape clusters but managed to maintain our allocation; fingers-crossed. Less praying was required in the Cigliuti (see video below) and Giovanni Rosso plots (younger vines) but as much attention in guiding the vine’s energies into the nascent bunches.

Plenty of chat, Italian thankfully, about how the new generation are divorced from the land, too preoccupied with selling and marketing; ‘forced’ to leave the work to subcontracted workers and consultant winemakers – wonder why some wines taste the same?

Next week: Roberto Conterno in the kitchen; Summer arrives with a whoosh; Birdlife