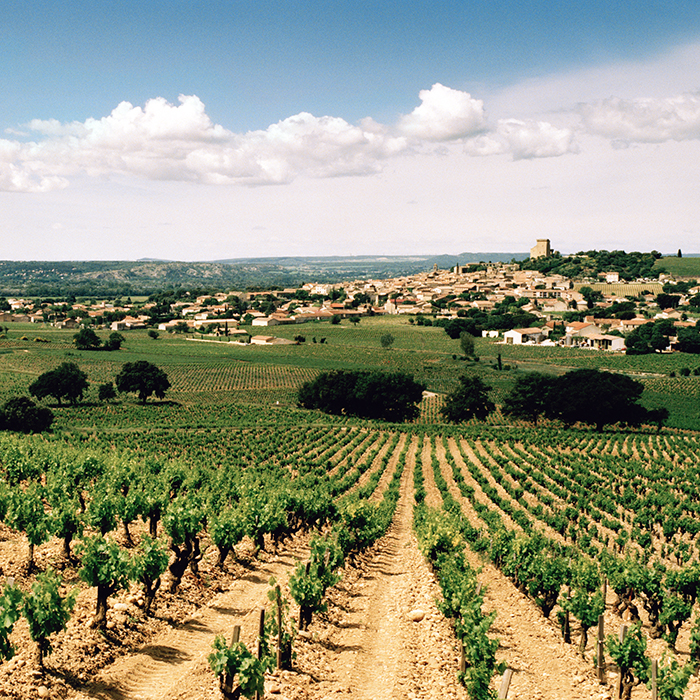 As our range of Rhône 2017 En Primeur goes live, our Buyer Fiona Hayes reports on how the region fared in 2017 and what the wines taste like

The 2017 vintage follows in the footsteps of two highly regarded years in the Rhône Valley. As such, speculation was rife as to whether 2017 could compete or even better the efforts of 2015 and 2016. The answer, perhaps, isn’t that simple. The vintage will be noted by many for its extremes in weather during the growing season, with “coulure” and “sécheresse” words on the lips of every producer we visited. Although this affected the amount of wine produced, the quality remains high and there are some very approachable examples that I believe have the capacity to age.

In the North, the wines will be noted for their warmth, displaying a juicy, ripe profile and supple tannins, while the South’s wines will remembered for less Grenache dominance in the final blend, contributing to the visibly lower alcohols despite the warm vintage and firmer tannins.

Both North and South experienced a very mild and dry winter, which – combined with little rain during the growing season – meant that the vines were under some drought stress, contributing to reduced yields across the region. The mild spring temperatures led to earlier than usual flowering, a crucial stage at which pollination is ready to occur, determining yield for both the current and subsequent vintage.

A sudden drop in temperature followed in late April, which was far from ideal, leading to poor fruit-set, known as “coulure”. Fertilization fails to occur and fruit growth is significantly impacted, meaning there are far fewer grapes. Earlier-budding varieties such as Grenache and Viognier are the most susceptible, so reduced yields both in the Southern Rhône (down 40%) and in Condrieu (down 50%) were typical.

Aside from a couple of pockets that experienced hail or frost damage, Syrah in the Northern Rhône went through flowering and fruit-set relatively unscathed. It was the same for other Southern Rhône varieties, such as Mourvèdre, which – as a result – make up a higher percentage of the blends this year.

A warm summer ensued and “sécheresse” (drought) meant that some vines struggled. As a result, the berries tended to be smaller (less juice) with thicker skins (more tannin) for the reds. For the whites, this means a richness and concentration, with fruit flavours at the tropical end of the spectrum. Harvest was earlier than “normal” and many growers had already harvested a third to half of the vintage by 1st September.

The drought’s impact is most evident in the South, where the tannins are more pronounced in the reds. It is, as Vincent Avril from Clos des Papes explained, the quality of tannins – rather than acidity – that determine a wine’s cellaring potential in the South’s warm climate. Those who have managed extraction well in the cellar have succeeded in making very good wines that will also age very well.

The 2017 vintage saw a return to warmer growing conditions in the North compared to the cooler temperatures experienced in 2016. As a result, the wines are driven by darker red fruit and spice, with a more supple tannin structure. Although growers spoke of reduced yields due to a lack of rain, these are more modest reductions compared to their Southern neighbours.

Notable exceptions to this are St Joseph and Crozes-Hermitage, where frost and hail caused damage (down up to 30 and 10%, respectively). In Condrieu – with Viognier being particularly susceptible to “coulure” – some growers reported losses of 50%.

Winemaking rockstar Yves Gangloff defines the vintage as “solaire”, but one that offers freshness, giving the wines instant drinking appeal, as well as the potential to age. Many growers feel the quality is on par with the highly regarded 2015 vintage, however the tannins are much juicier in profile, rather than firm and rustic.

There is no denying that the whites are rich and more tropical in profile than both 2015 and 2016. We have been careful to select only those that managed this well – choosing exceptional examples that demonstrate the luxurious opulence balanced by the acidity and energy that top growers are aiming to showcase.

This was a warm vintage with summer temperatures easily hitting above 40⁰C. But – while there is a density and core concentration that oozes generosity – the wines are remarkably balanced, with a vibrancy and alcohol levels kept in check. Growers made comparisons with 2015 and ’16, with ’17 being more concentrated than ‘15 but less powerful than ‘16. Vincent Avril suggested his 2017 has similarities to other rich and highly regarded, age-worthy examples such as 1990 and 2010.

Although Grenache’s susceptibility to “coulure” was the biggest factor in reduced yields, some isolated areas suffered from hail damage – something mentioned specifically at Vieux Télégraphe. Switched-on winemakers picked early enough to retain acidity and – especially for the whites – blocked malolactic conversion taking place.

Tannin management was spoken about by many winemakers in the South, with a need to manage the thicker skins of 2017. Minimal extraction helped to achieve a finer tannin structure, something that Domaine de Marcoux’s Châteauneuf-du-Pape displays particularly well. Notably less Grenache, combined with typically more Mouvèdre and Syrah in the wines, as well as a warm year, has resulted in wines that offer firmer tannins, more garrigue, spice and dark berry fruits, a deeper colour and a broader, juicier mouth-feel.

One Response to “Rhône 2017: vintage report”