Domaine Tissot: exploring the joys of the Jura 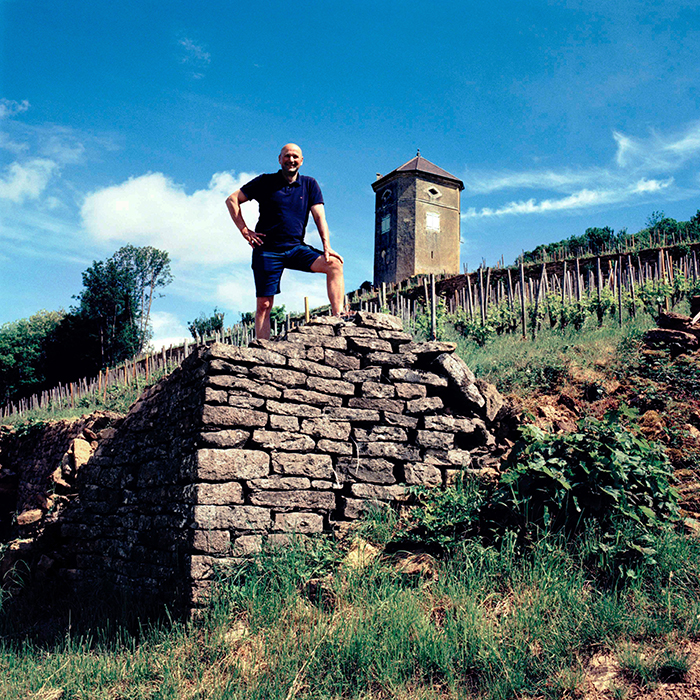 Stéphane Tissot amongst his vines in the Jura. Photograph: Jason Lowe

Just an hour’s drive east of Burgundy, the Jura is one of the wine world’s most fashionable regions. Burgundy Buying Assistant Will Heslop walks us through the range of one of our favourite producers in the region, Domaine Tissot

The 40-odd hectares of Domaine Tissot are split into almost as many tiny parcels of vines, planted on a patchwork of terroirs around the town of Arbois in the Jura, one of France’s most spectacular wine regions. The entirety of the domaine’s holdings are farmed biodynamically by Stéphane Tissot and 15 full-time staff – a huge number for a domaine this size, but biodynamics calls for many more pairs of hands than conventional viticulture.

Depending on the vintage, Stéphane produces up to 28 separate cuvées, from four varietals, in an exceptionally broad range of styles. The whites are made from Chardonnay or the indigenous Savagnin grape, while the reds are either Pinot Noir or one of two other local heroes, Trousseau and Poulsard.

Stéphane’s Chardonnays, which tend to be aged for a year in Burgundian oak barrels (between 10 and 20% new) are the cuvées most indicative of the nuances in terroir here: south-facing vines on soils of deep clay account for the ripeness and gossamer texture of Les Bruyères; Graviers, on the other hand, is a more austere, mineral cuvée from shallower soils, strafed with limestone.

Naturally, the non-Chardonnay cuvées also tell us plenty about where they’re grown, but the way they are handled in the winery is perhaps of greater interest. In this regard, the domaine’s five Savagnins make for a particularly thought-provoking comparative tasting. The Traminer (a synonym of Savagnin, typically denoting a non-oxidised wine) is made in similar fashion to the Chardonnays – the emphasis therefore on freshness, terroir and varietal character. The Savagnin, by way of contrast, spends 32 months under flor in barrels which are not topped up (allowing the flor to breathe), where it develops the aromas of nuts, celery and camomile beloved by devotees of oxidative wines – a family including Fino and Manzanilla Sherry.

The herbal, almost tannic Savagnin En Amphore, meanwhile, is macerated for four months then matured for three in 420-litre amphorae, and is sulphur-free. Like the Traminer, it’s non-oxidative.

Finally, still Savagnin, come the two whites most emblematic of the Jura: the Vin Jaune (from the lieu-dit La Vasée) and Château Chalon from the eponymous appellation. Both are matured for six years in used barrels – not topped up – during which time around a third of the wine evaporates, the remainder becoming more concentrated, with a higher level of alcohol. Since the winemaking is identical, the distinction between these two wines brings us back to terroir. Stéphane finds the Château Chalon a touch more mineral and precise, owing to the vineyard’s Liassic clay soils – tellingly, he identifies similar characteristics in Sursis, a Chardonnay grown on the same terroir.

The noteworthy winemaking techniques don’t end with the domaine’s whites – far from it. Whole bunches of Pinot Noir from the En Barberon vineyard are heaped into tronconique vats – large wooden vessels tapering upwards – for five weeks’ maceration before the wine is transferred to barrels. The process is evident in the wine’s spicy, lifted bouquet and remarkably supple tannins. The Trousseau En Amphore is a red counterpart to the amphorae-raised Savagnin, with the same energy and depth of flavour, and a similar mouth-feel.

Certainly then, the wines of Domaine Tissot could be described as cerebral, but they’re also sensual – above all when paired with the right dish. There are few better gastronomic combinations than Vin Jaune with aged Comté. Equally, poulet au vin jaune, served with the same wine the chicken has cooked in, is an upgrade on an already sumptuous French classic, coq au vin. Among the reds, the plush, cherry-scented Trousseau Singulier will have you reaching for a plate of charcuterie, and Stéphane recommends haunch of venison to accompany his Pinot Noir En Barberon.

Stéphane invariably signs off emails with the phrase, “la vie est belle”. Uncork any wine from Domaine Tissot, and you’ll be hard-pressed to disagree.

Find out more about the Jura on bbr.com