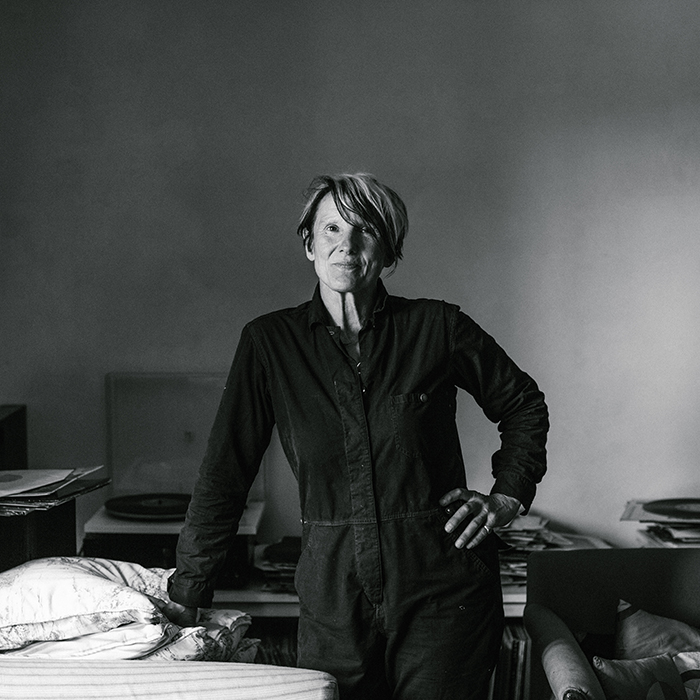 Kate Boxer, photographed by Elena Heatherwick, at her Sussex farm

Today sees the launch of our latest limited-edition Good Ordinary Claret label, with celebrated British artist Kate Boxer following in the footsteps of Luke Edward Hall and Sir Paul Smith. Emily Miles visited Kate in her studio to talk about family, food and the bucolic beauty of Sussex

In the dialled-up, high-contrast sunshine of a perfect midsummer’s day, Kate Boxer emerges from her kaleidoscopic cottage garden, enthusing, apologising and welcoming us in a tumble of words. Kitted out in a dark navy boiler-suit, she thrums with energy – her hands directing her conversation as she leads us into the cool and dark of the farm’s kitchen.

Her Sussex home is idyllic. This is no artfully constructed slice of shabby-chic rural England; it is blissful, natural, bucolic and bohemian. A time-worn, wood-smoke- and oil-scented farmhouse, jumbled and patched through centuries of habitation; acres of land – tall, rhythmic grasses, hotly fragrant herb beds, pigs, chickens and heady views of the surrounding hills.

As Kate dives in and out of buildings and pathways, her enthusiasm for the life that surrounds her is evident. Her Kunekune pigs, Bob, Belinda and Barbara, welcome her like a true old friend, delighting in being scratched and crooned over. Her chickens, too, fuss about her as she hustles them out of a beautifully constructed coop. Only the donkeys – Jeremy and Joanie – remain surly-looking, possibly immune to her charm.

Kate was born and raised in the Sussex hills, but left her childhood home behind for university in Edinburgh and family life in London. It was only when, a decade ago, the farm was left to her by an aunt she found herself drawn back. Considering how woven into the framework of the place she seems, it is hard to picture her anywhere else or to imagine her “other life” in south London, where her husband Charlie runs his Stockwell deli and her two sons, Jackson and Frank, forge their livelihoods.

“Jackson loves cooking here,” she explains as we walk past a fire-pit in the garden. Her eldest son is the chef behind Brunswick House and the newly opened St Leonards; he cut his culinary teeth here and, from the open-air fire to the rediscovered bread oven deep within the farmhouse walls, there’s a clear line to be drawn between his time at the farm and his instinct for flame and earth. Frank, meanwhile, is the man behind Peckham’s brilliant carpark-rooftop bar – a joyful place, with simple things perfectly executed, and surely one of the postcode’s most unlikely success stories.

A love of food, of drink – and of “being together around the table” – clearly draws this family together; Kate speaks with warmth and pride about her boys and their place in this foodie dynasty (“we are so lucky, and we so enjoy what they do,” she says). “Charlie’s mother [Arabella Boxer] was an incredible and renowned food writer; her books were – and still are – really amazing, so good and so ahead of their time.” Kate darts around her little kitchen, brewing intense, dark coffee. “My mother was a really good country cook,” she explains. “All chaos and mess, like me.”

Chaos? Perhaps – but only in as much as Kate’s personality is one that bubbles over and a sense of unbridled generosity infuses everything she does. Her art – playful and spirited prints, paintings and etchings – is no exception. In her studio, while her works-in-progress are self-consciously turned to the wall (“no one’s seen them yet, except Charlie,” she apologises), she is only too delighted to explain how she goes about the process of making: “It’s very Blue Peter,” she shrugs. “You paint glue onto the plate where you want the image and shake on the ground up carborundum stone. It’s a very kindergarten way of making a plate really because most people use acid and it’s very nerdy and precise. You can draw into the plate too,” she explains. “The printing itself is done by two different master printmakers; the printing process is way more skilled than the thing I do because that’s just the drawing,” she demurs. 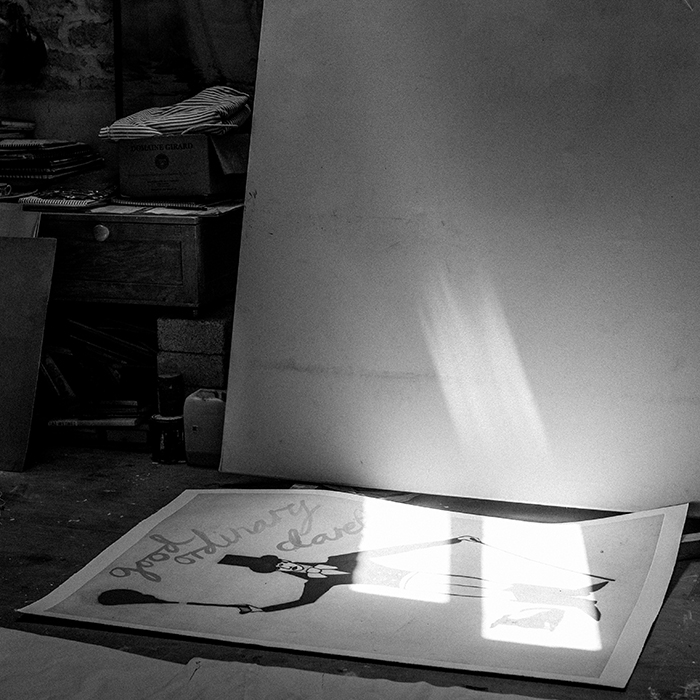 An early proof of the artwork Kate created for our Good Ordinary Claret label, photographed in her Sussex studio by Elena Heatherwick

When we asked Kate to create a label for our Good Ordinary Claret – a commission describes as “so, so brilliant, I’m still surprised at being asked,” she conjured a huge carborundum and ink print of a dashing dandy, pistol drawn with a pup at his feet. “It’s not Beau Brummell,” she explains, “but he is a Beau Brummell-y figure, with Figgy my dog.” The idea for the design came to her naturally: “It’s like the things I’ve done for my last few shows – painting very well-known people (from Mary Shelley to Fellini), I find that from reading their books, or watching their films and so on they lurk around in your head, and they become part of your psyche. It was like that with Beau Brummell,” she says.

Kate has little formal training as an artist, but she has always been drawn to the profession. “Ever since I was little, I’ve wanted to do it,” she says. “Oddly enough, my grandfather was an artist – a very good painter, though he burned practically all of his pictures – but perhaps I have ‘something’ through him. My father would say to my mother, ‘Look darling, look at that, isn’t she brilliant!’, and my mother would say, ‘It’s not brilliant, she does the same thing every day!’ And I did; I drew these little ladies in Elizabethan dresses over and over again.” Despite her early enthusiasm, she always felt artists were “other beings”, so instead went to university in Edinburgh to study history, and went on to have her two boys.

It was only several years later, when a dinner guest persuaded her to join her art group, that she truly got started. “Afterwards, I didn’t go to art school because I knew I would have been too torn between the boys, so I just carried on at home and kept making things – paintings and drawings. And then my friend, who was decorating someone’s house, said, ‘We’ve got an empty garage, why don’t you hang your stuff up there?’ So I had my first show in this nice woman’s garage in Lancaster Mews.

“Everyone was so sweet – everything was about 50 quid and everyone bought something and I was hugely encouraged by it; and then someone gave me a little show and it sort of rolled on from there,” she says.

It most certainly did: aside for commissions for books and paintings for the likes of London club and restaurant Quo Vadis, Kate works with two galleries with which she has an affinity – Cricket Fine Art in London and Hungerford and Wychwood Art. She has a keen following and is widely praised for her witty touch and her ability to capture her subjects’ spirit and essence in her lines and ink, a characteristic which possibly comes from her own innate energy.

Effusive, sharply intelligent, a touch eccentric and palpably happy – in both her art and in her life – Kate Boxer is something of a force of nature. Her secret? “I’ve never said no to anything,” she grins. “It’s absolutely key to everything.”

Kate Boxer’s limited-edition label for Good Ordinary Claret is available now at bbr.com; to view her work go to cricketfineart.co.uk