The cellarman of St James’s 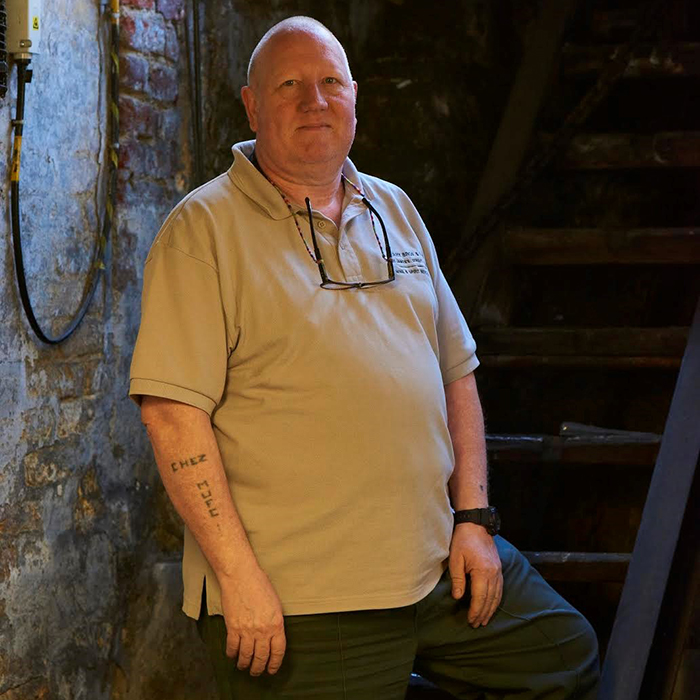 Allan Perry in the cellars at No.3. Photograph: Joe Woodhouse

If you’ve bought a bottle from No.3 St James’s Street in the last 37 years, chances are it’s passed through the hands of Allan Perry. On Friday 27th April, No.3’s ebullient, wise-cracking Cellar Manager, nicknamed Amyl, called time on a career that has lasted nearly four decades. During this time, he has seen five chairmen come and go, tasted a wine from every vintage since 1870 and watched as Berry Bros. & Rudd has grown from a relatively small – and still quite parochial – West End wine merchant, to an international business with offices in Tokyo, Hong Kong and Singapore. Though it has modernised considerably in the past few decades, the company still retains some of the Old-World charm you’d expect from a business founded in the 17th century.

That said, it probably didn’t feel particularly charming when a 20-year-old Allan first walked through its black-green doors on Friday 28th March 1981. Before he answered an advert in the South London Press – a St James’s Street wine merchant that was looking for a cellarman – his experience of the wine trade didn’t extend much further than Victoria Wines: “I thought it’d just be a shop, like an off licence or something, so when I first walked through the doors, I was blown away,” Allan says.

He was met by a man in a pinstripe suit, who barely looked up through his horn-rimmed spectacles before asking in an intimidating drawl, “Can I help you, sir?” Allan was told to take a seat to wait for a director to come down and interview him. Led to The Parlour at the back of the shop, which back then reeked of old cigars, the street-wise 20-year-old must’ve made an impression because, “the same day I got a call from his secretary asking if I could start on Monday”.

Nowadays, 20-year-olds are considered precocious if they’ve moved out of home, but No.3’s newest cellarman had already been in London for three years, working in a chemical factory – from which he gets his nickname – and a few bars. Before that, when he arrived from his native Liverpool, he slept rough while looking for employment. I’m surprised to hear he was born by the Mersey, not only because of his south-London twang, but also the large “MUFC” tattoo on his right forearm. “Oh yeah, I’ve my foster father to blame for that. He was from Manchester and used to take me down the East Lancs Road from Liverpool to Old Trafford aged eight – I’ve been hooked ever since. You can change your religion but not your football team.” Being a QPR fan, I nod in grim agreement.

“You can change your religion but not your football team.”

It must have been intimidating then for a young man with his background to walk into that environment. “It was. The shop was dark, cold and gloomy then and there were just two guys who worked up there – Gill Gagen and Richard Colman – who looked like they were born in pinstripes and were always immaculately turned-out.” The only room off the shop – now the Merchant’s Room – was where the switchboard was located. “It was managed by a lady called Sue Wren, who worked here for 40 years,” says Allan. “The switchboard was manual so whenever she transferred a call, she did it by hand, unplugging one line and moving it to a different socket.”

Elsewhere, pen and paper were as high-tech as things got: there were more than 150,000 bottles of wine in the cellars back then, and each one’s location had to be carefully noted. The wine arrived twice-weekly on a flat-bed truck, “There was usually 10 pallets with 40 cases of wine on each one, which had to be unloaded by hand – it used to take two hours to get the whole job done.”

Cases of fine wine weren’t the only things Allan was obliged to lift in his new role. Soon after he joined, a particularly drunk aristocrat – let’s call him “Lord Perch” – popped in after a long lunch at a nearby club to pick up something to take home. “He walked in swaying and said, ‘I’m just going to take a seat’, sat down on the old No.3 coffee scales and promptly fell straight backwards, arse over tit. Gill, again barely looking up from his high sloping desk, said, ‘Can you help Lord Perch to his feet? He appears to have lost his footing.’ I couldn’t believe it – I think his grandson’s still a customer.”

All that lifting constituted thirsty work, and the cellarmen used to have two barrels of beer delivered a month, one bitter and one lager, to keep them refreshed throughout the day – “there was 44 pints in each barrel, they usually lasted about two weeks.” Beer-breaks were a tradition: “We used to have four a day, the first was at 10am – which wasn’t officially a ‘beer-break’, but you’d have one anyway.” Unfortunately, due to the presence of moving machinery in the vicinity, health and safety inspectors put paid to their daily refreshment in the early 1990s. But, luckily, the Red Lion pub in Crown Passage still survives for a post-work grip – “that place hasn’t changed at all, I still see punters from the early days”.

“We used to have four beer-breaks a day, the first was at 10am”

Legend has it that there is a secret passage leading from the cellars into the Red Lion. Sadly, Allan is quick to dispel this rumour: “There are probably loads of small tunnels that have long-since been filled. There was always talk of one that ran under Pall Mall to St James’s Palace.”

In Henry VIII’s day, the Palace’s tennis courts were located on St James’s Street, with artesian wells running under the building to deliver the water supply. A particularly big one was discovered a few years ago during the refurbishment of the Pickering Cellar. It’s now covered with glass so that customers using the cellar’s WC can look down into the inky depths. “I wanted to put a skeleton down there holding a bottle, that would have really given them a fright,” says Allan.

The presence of customers in the cellars is a far-cry from Allan’s early days. With most of the stock now in Basingstoke, No.3’s cellars have been opened up to more than 1,000 events a year. “We used to not see anyone for months, now we help lost customers find their way back to their tables every day,” Allan says. Given the combination of good wine and two and a half acres of labyrinthine cellars, this is perhaps not unsurprising.

Few customers – or, indeed, staff – have had the privilege of tasting the same quantity and quality of wines as Allan, who has to check every bottle which is opened from the house reserves. “I tasted an ’82 Le Pin which blew my mind and had a bottle of ’28 Fonseca Port which was superb, really incredible, and I’m not a big Port drinker.” Of all the wines he’s handled and tasted, the sweet ones are the oldest. “We opened a bottle of 1832 Tokaji a few years back. It was amazing to think of where this thing had been, it was like drinking history. About 1998, the company put one of these tiny bottles up for auction; it was bought for six grand.”

Allan doesn’t exactly fit the stereotype of your typical wine connoisseur but his knowledge and experience is astonishing. He insists that, despite its sometimes-fusty image, Berry Bros. & Rudd has always been an inclusive place, welcoming of anyone with a hunger and desire to learn about wine. There have been many eccentric personalities over the years, but one – Norman Shelley – sticks in his mind. “He was an old chippy who drove in everyday from Somerset to repair things around No.3. A lot of the time he’d be fixing the floorboards in the shop, which would constantly need replacing. In order to make new boards look old, he’d mix together tea and coffee and paint them. He used to make his own scrumpy and bring it in to work. I once asked him what he put it in and he said: ‘You know, the usual stuff – spiders, frogs’ heads’. It was lethal.”

Come May, the smooth-worn, grey York flagstones of No.3’s cellars will miss Allan’s familiar tread. So what’s next? “I want to visit more of Britain, see what these islands have to offer.” But first, we’ll see you in the Red Lion, Amyl…

2 Responses to “The cellarman of St James’s”