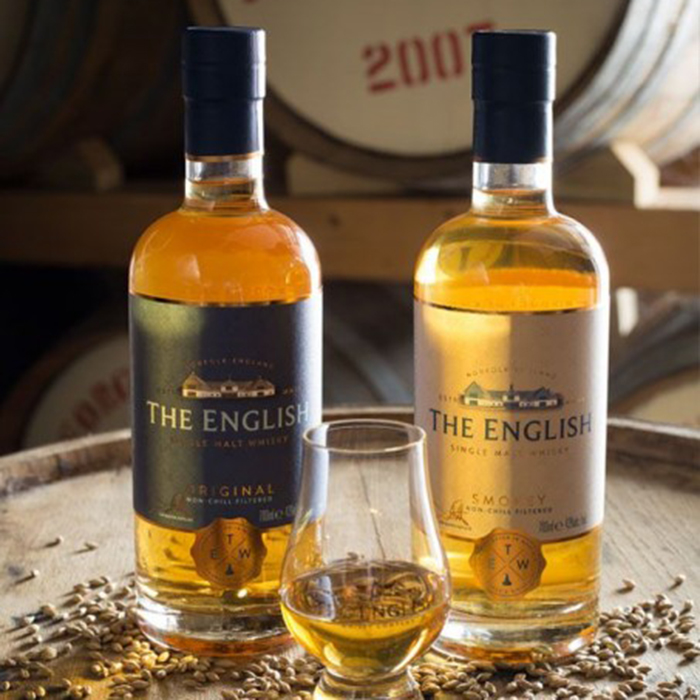 The English are renowned for nothing if not their discernible “spirit”. In the run up to St. George’s day, we ask whether the descendants of this patron saint are capable of rivalling their neighbours’ propensity for distillation over the border, and further yonder. Spirits Buyer Rob Whitehead offers us his thoughts

“And were distilleries builded here, among these dark, satanic mills”

It is my opinion that our Scottish brethren make more, great whisky than anyone else in the world. Thankfully, for someone who enjoys variety as much as I do, there are many other nations producing good, great, and even glorious whiskies in this twenty-first century golden era. Here, I will take you on a spiritual tour, as we explore the whisky awakenings of the Scots’ southern, Sassenach siblings:

First, to Norfolk, as we visit the current leaders of the pack, is the admirably very straightforwardly-named English Whisky Company. This was established in 2006 by Andrew Nelstrop and his late father James amongst fenland and fields of barley at St. George’s distillery near the Norfolk/Suffolk border. The team here, led by wildly talented master distiller David Fitt, has produced a range of bottlings over the years, including some I’ve deemed worthy enough to be the first ever English whiskies sold by Berry Bros. & Rudd. The last few years have seen a consolidation in the range of offerings, which in my view, has allowed them to scale even greater heights of quality.

West next, to Herefordshire we travel, to Chase Distillery: erstwhile potato peddlers, and now in serious contention for the classiest distillers in England. They produce a range of gin and vodka – the smoked and cask-aged variants of the latter proving particularly intriguing, and liqueurs, including the only limoncello I’ll allow in the building (!) Chase have never released a whisky, so why include them in this tour? Well, call me curious, but they’ve got some beautiful little copper pot stills, access to quality barrels (not to mention malted barley) and the long-term sensibilities that so often beget warehousing brim-full of liquid patience…one to watch, we suggest.

Southeast, slightly, to the bucolic Warwickshire hills for our next stop at the Cotswolds Distillery. Here, in splendid setting, spirit has been flowing since their founding, by redoubtable American Dan Szor, in 2014. Firstly, an excellent gin was the only available fruits of the team’s labours, but now, after the requisite passage of time, they’ve allowed the first small batches of single malt out into the world. Thankfully, the wait was worthwhile, and you can expect to find their products in our range shortly.

Now northwards we must go, to one of England’s most ruggedly picturesque regions, as we visit The Lakes Distillery in the achingly beautiful heart of Cumbria. As with their Cotswold cousins, distilling began here in 2014, with, predictably, gin being amongst the first products released. It has been refreshing to note that, amongst the veritable horde of gins being offered and proffered to me, this producer (along with the two above) have striven to distil individual, interesting, quality gins whilst still focusing on that very much longer-term goal of maturing whisky. The first of their products to nestle in our range, the Explorer Gin has very recently arrived – likely not to be too long until temptation strikes, and I admit one of their whiskies into the fold.

Finally, and with no lack of hometown pride, we cross the Pennines into my beloved county of Yorkshire, to visit the newest, and final, distillery on this spiritual journey. Established in 2016, a mere 11 miles from where I was born, the Spirit of Yorkshire distillery is producing, without question in my mind, the most exciting malt spirit in England at this tender age. Growing from the shared dreams of farmer and top-notch brewer Tom Mellor and long-time friend David Thompson, and now under the stalwart purview of Director of Whisky, Joe Clarke, the team are growing all their own barley at the start of the process and bottling on-site at the very end, which is a rare occurrence anywhere in the whisky world and shows the commitment to quality being upheld here. So far, there is no whisky, as the minimum maturation period for English whisky is three years in oak, exactly as for Scotch. However, if the immense promise inherent in their one-year old Spirit Drink (the unromantic but legally correct term for not-yet 36-month-old whisky) is built upon, and furthered by the passage of time, then I hugely look forward to welcoming a Yorkshire whisky into our range.

In conclusion, I shall continue my journeys, and ask you to join me in this enjoyable endeavour. Furthermore, (with apologies to William Blake), I will not cease from the mental fight of exploring these and other new producers, nor shall my tasting glass sleep in my hand, now that we have built distilleries in England’s green and pleasant land.

Drop in to our 63 Pall Mall and Basingstoke shops where many of our wines and spirits are regularly on taste. For other English products to try, click here.