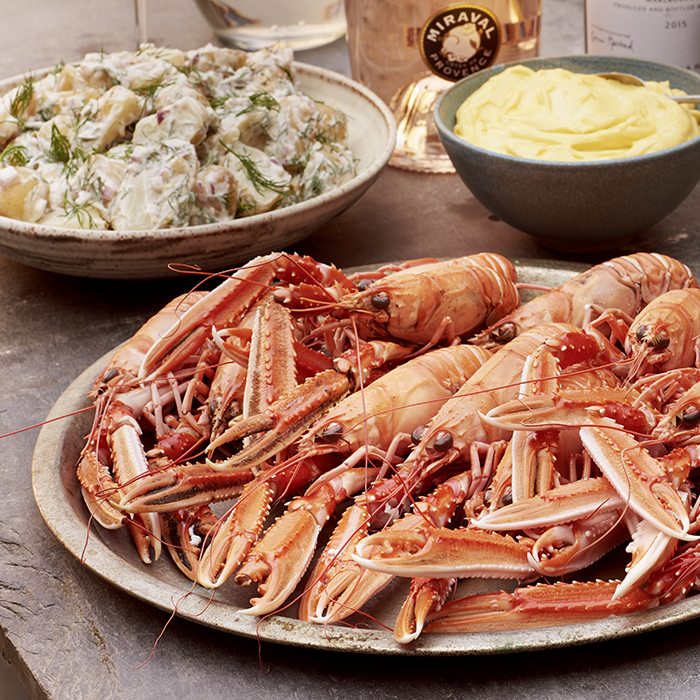 Crab, lobster, oysters or haddock – Britain’s 7,723 miles of coastline are home to shores of the freshest fish. We’ve selected five of the best festivals celebrating our nation’s seafood, and asked our Head of Events and Education Richard Veal to pick the bottles to take along with you

Arbroath Sea Fest – Arbroath, Scotland, 5th to 6th August: Arbroath smokies are probably better known outside the UK – being especially popular in Scandinavia – than here at home; which is a shame, since a mouthful of these small, hot-smoked haddocks is a unique treat. Unfortunately, the town from which they take their name is no longer the fishing hub it once was, all haddock now being caught by big North Sea trawlers; however, since being granted appellation status by the European Commission in 2004, an Arbroath smokie can only be made by one of the 15 or so smokehouses dotted around the pretty little town. There’s much more to the annual fish festival than the smokie, though there’s no better way to taste the delicacy than within stone-skimming distance of the sea and smoke-sniffing distance of the smokehouse from whence it came. The two-day event includes brass bands, a funfair, live fishing and water sports demonstrations, and around 100 different stalls dotted across the harbour selling food, crafts and confectionary. Arbroath is also a wonderful jumping-off spot for exploring the rest of the craggy, beautiful northeast Scottish coast.

What to drink: Maybe not one for swigging while you walk, 2008 was an exceptional vintage in Champagne and Pol Roger’s Blanc de Blancs has harmony, balance, intensity and vigour. Is this the world’s perfect match for the blockbuster flavours of a smokie? Probably not, but I need another excuse to be drinking it.

Newlyn Fish Festival – Newlyn, Cornwall, 27th to 28th August: Eschewing the more chichi sensibilities of other Cornish coastal resorts, Newlyn – the British mainland’s most southerly town – still boasts one of the country’s largest fishing fleets and over 40 acres of operational harbour. Perhaps unsurprisingly, therefore, its famous covered fish market is a seafood mecca, with a huge variety of aquatic fauna sold there every day. Newlyn’s residents, many of whom are connected to the fishing trade, are keen to preserve this identity and celebrate the contribution fishermen have made to Cornish culture. The fish festival, which takes place every August Bank Holiday, was created to raise money for the Royal National Mission to Deep Sea Fishermen, who help the families of those who are lost or injured at sea. Festival-goers are given the opportunity to have a look inside the trawlers, long-liners, crabbers and small mackerel-fishing boats that local fishermen use. Then, most importantly, you’ll be able to munch on every kind of fish these boats catch. There’ll also be live filleting and cooking demonstrations from dozens of different chefs.

What to drink: There’ll be a variety of fish being eaten here: John Dory, cod, haddock, and you can’t go wrong with Château de Puligny-Montrachet’s 2014 Chassagne-Montrachet, a deliciously citrusy wine that will match up to almost any seafood. Unlike other whites, its relative heartiness should also keep you warm against any blustery Cornish winds.

Clovelly Lobster & Crab Feast – Clovelly, Devon, 3rd September: Clovelly is a picturesque fishing village nestled among the cliffs of the wild, windswept North Devon coast; so picturesque is it, in fact, that J.M.W. Turner painted the village in 1824. In Turner’s time, Clovelly still had a thriving lobster trade but nowadays its vertiginous cobbled streets and beach donkeys attract more tourists than fishermen. However, in the first weekend of September, the village celebrates the ancient contribution these famous shellfish have made to Clovelly. This year there’ll be live folk music, cookery demonstrations and piles of steaming lobster and crab. There is also plenty to entertain tiny crustacea, with a theatre troupe, magician, balloon modelling and craft activities in the harbour. The feast is in aid of the National Lobster Hatchery, based just down the coast in Padstow. At the end of the day they’ll be releasing some of their baby lobsters into Clovelly Bay – it could get emotional.

What to drink: Lovers of Italian white will double-take at this stand-out Pinot Grigio from Lis Neris in Friuli. An exceptional example of trend-setting, not following, its precision and lightness marry the varietal characteristics of pear and citrus. These flavours make it the perfect match for lobster or crab.

Hastings Seafood and Wine Festival – Hastings, East Sussex, 16th to 17th September: I hope you’ll excuse my Norman, but Hastings is probably more en vogue than it’s been since 1066. After a period of economic decline, the restoration of the town’s beautiful Victorian shopfronts and the opening of a handful of exciting restaurants, means the charming streets of the Old Town are buzzing once more. The Seafood and Wine Festival coincides with the denouement of the holiday season, and this year’s will be the biggest ever. The main festival site, where you’ll find food stalls and live music, is located among the eye-catching blackwashed Net Huts on the seafront; however, restaurants and pubs all over Hastings will be throwing parties to coincide with the festival. The focus is not only on local seafood but also southern England’s burgeoning wine industry – whose award-winning sparkling wines provide the perfect vinous accompaniment to freshly-caught fish. When visiting, don’t forget to take a ride on the town’s funky 267-feet-high Edwardian funicular – though maybe before you’ve guzzled down Gusbourne and oysters.

What to drink: Our English Sparkling Wine, made by Gusbourne Estate: it would be rude not to. This English sparkling offering is from our award-winning Own Selection range and is a stand-out example of why English wines are becoming more and more popular. Chardonnay, Pinot Noir and Meunier offer complexity, depth and intrigue. Don’t drink it because you’re a patriot, drink it because it’s really good. And it happens to go really well with fish.

North East Oyster Festival – Sedgefield, Co. Durham, 22nd September: Whether it was the purported aphrodisiac qualities of everyone’s favourite bivalve mollusc, or too much Kentish ale, organisers were forced to “scale back” this year’s Whitstable Oyster Festival after a slew of complaints about anti-social behaviour by local residents. The North East Oyster Festival, on the other hand, seems to be scaled up with every new edition. This year’s event takes place in the Hardwick Hall Hotel, set among the verdant hills of the County Durham countryside and far away from the threat of twitching curtains. Now in its 14th year, the festival has become a firm and raucous fixture on the local social calendar, with men and women dressing up in their Sunday best to down as many oysters as they can. Past events have seen performances from Paul Young, Martha Reeves and the Vandellas, Al Murray and the Red Hot Chilli Pipers: Scotland’s biggest Celtic rock cover band. This year, the Wild Murphys and the JJ Galway Band – “purveyors of Irish music and quality hangovers” – will join Tony Hadley of Spandau Ballet to take to the stage and keep the crowds dancing until daybreak. Oh, and there’ll be more oysters and Champagne than you can shake an, um, oyster knife at.

What to drink: For native oysters, André Ostertag’s Heissenberg Riesling is as fresh and lively as Riesling should be in youth. It will also deliver weight, both through its intense fruit and relatively elevated alcohol content. Superb with the sweet meatiness of English natives.

For Pacific or rock oysters, this new Chardonnay from our Own Selection range is a benchmark Aussie wine. Lighter on the palate, with a greatly reduced oak treatment, its freshness will make the Thames Estuary feel like Sydney Harbour.