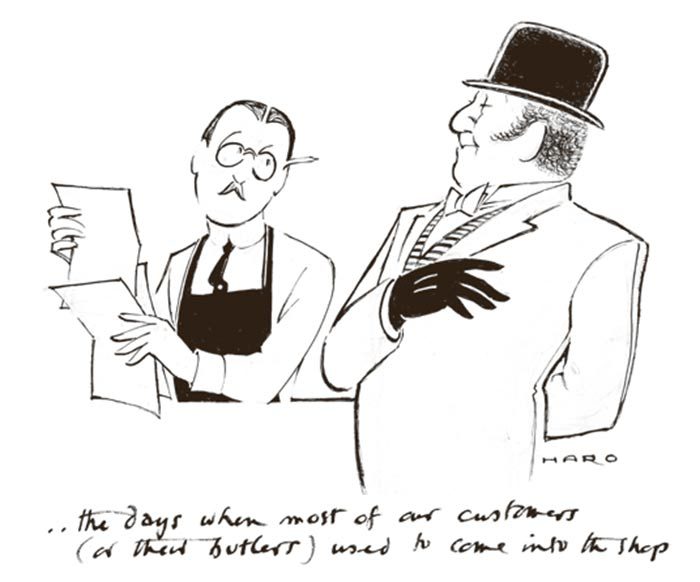 As we swing open a new set of doors on Pall Mall, our Chairman Simon Berry peers around the corner, pondering the evolution of No.3 St James’s Street

When I first worked in the shop at No.3 St James’s, it wasn’t really a shop. The only bottles on display were ancient and empty. “Why would anyone want to look at a label?” my father would exclaim whenever it was suggested that we should put bottles on shelves. “Wine should be kept in a cellar – that’s the only way to make sure that it’s going to be good to drink.” I remember a bottle of Beaujolais being placed on the table by an enthusiastic Shop Manager in the late 1970s, in a misguided attempt to keep up with the fashion for Beaujolais Nouveau. John Rudd, at the time Managing Director, walked through the shop on his arrival that morning, bowler hat still firmly on his head. As he passed the table he glanced at the bottle. He hardly broke stride, but a very audible “over my dead body” was registered by everyone in the shop. The bottle of Beaujolais disappeared very quickly.

My father, to his dying day, knew that room as “the Office”. When he was growing up, the partners had their desks there, towards the front. The clerks sat at the back, either side of the tall Dickensian desk. Customers, or more likely their butlers, would push open the door, probably failing to make the doorbell ring (it was usually broken) and – unless personally known by the partners – run the gauntlet to the far end and the comparative welcome of an upraised eyebrow from one of the shop clerks.

In my day – 40 years ago – the directors had moved to other parts of the building. Customers would come in, be greeted by one of four or five shop assistants, sit down at the table and be handed a price list. It was more of a consulting room than anything else. Mostly the order would be charged to an account, and booked for delivery. Sometimes the customer wanted to take the wine with them, which required a lengthy trip down to the cellars to assemble the order. Even more occasionally the customer wanted to pay with cash or by cheque, which involved a Victorian wooden till, incorporating three-part paper dockets inter-lined with carbon paper which frequently jammed and tore. At Christmas, this was not the most efficient way to run a shop. Queues would build up as shoppers tried to lay in provisions. Festive joy tended to be in short supply.

One busy day, when the drawer of the till must have held many thousands of pounds in folding money, all of the salesmen were in the cellars at once, putting together orders for impatient, time-strapped customers. When the salesmen emerged they discovered that somebody had walked into the shop, by-passed the queue, and walked out with the till tucked under their arm. From that moment, it was clear that things needed to change.

But not too quickly, of course. The ancient wooden shutters were still ceremoniously fixed to the outside of the windows at closing time every evening and inside the windows the slightly less ancient iron shutters never came down. I can still see the shop on the morning we decided to remove them: the undulating floorboards bathed in sunlight; the salesmen, accustomed to Stygian gloom, balefully blinking in the unaccustomed brightness. It was as if we had stripped them of their clothes and they were standing naked for every passer-by in St James’s to witness. The transformation had begun.

Bottles – even bona fide window displays – started to appear. We stayed open until 6, and it was acknowledged that members of the general public were allowed (even encouraged!) to come through the doors and buy a single bottle. At Christmas we would put up a tree – our Dickensian heritage had been very much modelled on Scrooge & Marley, it seemed – and even fill one of the side offices with stocks of the lines most in demand. Good Ordinary Claret, our own Champagne, Cutty Sark and The King’s Ginger liqueur were all at hand, so interminable trips down to the cellar were instantly reduced. We even opened on Saturday mornings, much to the annoyance of our friends across the road at Justerini & Brooks, who feared that they would have to follow suit and suffer irredeemable damage to their shooting timetables… 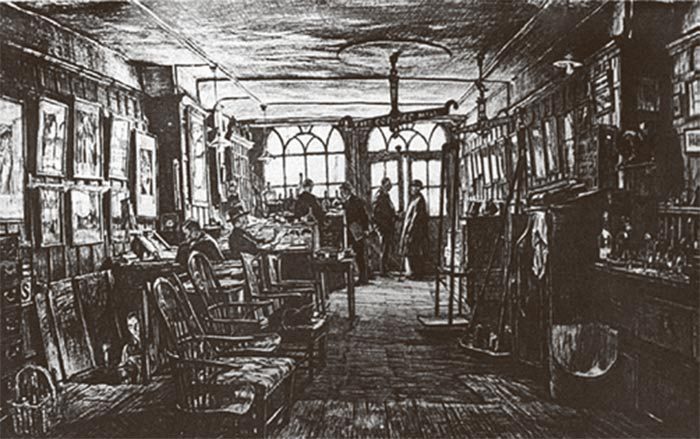 An etching of No.3 as it was in 1925 by Sir Muirhead Bone; the original hangs in our cellars today.

In 1994 we opened our first Heathrow shop, and overnight had to become 20th century retailers. Many of the techniques we learnt in Terminal 3 we brought back to St James’s Street. We even began to display bottles on shelves – not in the “Office”, but in the adjacent rooms – where the switchboard had been housed when I first came to St James’s, and the original stock office. Quite soon we also expanded next door to No.2. Originally this had been the St James’s Buttery – a greasy spoon café which seemed out of place in modern St James’s Street, but which had served the best fried egg and bacon sandwiches for miles. When it closed, we moved in, originally thinking we might have a wine bar there. When it became clear that it was too small, the space languished as a storage room – the place where our old computers went to die: possibly the worst recorded use of space on an important London shopping street. Hugh Johnson’s wine accessory shop moved in for a few months, and then we fitted the room out with shelves more suitable for wine rather than glasses and decanters.

My father wasn’t impressed. The original shop was even more firmly “the Office” in his mind: the outlying rooms were always referred to as the “supermarkets” or, more politely, the “bottle shops”. And although sales increased as a result of this re-design, I did have a certain amount of sympathy for him. English Heritage would never have allowed us to create the St James’s Street version of Augustus Barnett, even if we had intended to, and it was still important that we shouldn’t destroy the uniqueness that 300 years of resistance to change had created. Because No.3 St James’s Street is unique.

J.K. Rowling came into the shop a few years ago and I was astounded to learn that she had never been there before – I had always assumed that Ollivanders Wand Shop was modelled on us. To many wine-lovers it is a place of pilgrimage and, even if their wine is ordered online and delivered from our Basingstoke warehouses, there is a touch of magic dust as if every consignment goes via St James’s. So we allowed the outlying rooms to be fitted out as more obviously recognisable wine shops so long as the unique character of the “office” was preserved.

Two years ago, the “bottle shop” at No.2 was converted to the entrance lobby of our new office development and I agreed that we could add a counter and more bottles on shelves to No.3. Sacrilege, my father would have said had he not died five years before, but I knew that this was a temporary measure. One of the main reasons we had never produced a real wine shop was lack of space – none of the outlying rooms were big enough, or connected to each other. We had, however, identified the perfect site: the ground floor of our two buildings around the corner on Pall Mall. All sorts of hurdles had to be got over, ranging from planning permission to the special and peculiar world of building contractors, but eventually we would have access to 1,000 square feet of excellent retail space – a mere 10 seconds around the corner. And this summer, that dream becomes a reality.

Others will describe what we have done to turn that space into (we hope) the greatest wine shop in London. It’s not just about design, of course, or location – the selection of wines is crucial, and most important of all is the exceptional team we have assembled to staff the shop and assist customers.

Even better is the news that No.3 St James’s Street will revert to its true function: the best place to come and talk about wine in the world. A special wood-panelled room, with uneven floorboards, and dusty artefacts that have assembled there throughout the centuries. And, most importantly, brilliant people who will steer you towards a delicious bottle of wine for any occasion without having to look at a label. For that, there’s another wonderful wine shop next door.

This article features in the Spring/Summer issue of No.3. Find out more about our shop at 63 Pall Mall here.