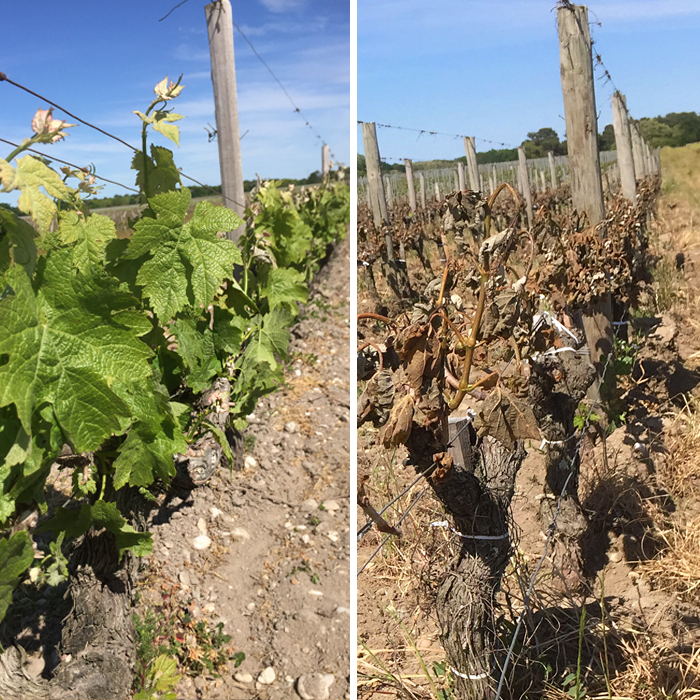 Before and after frost struck a row of vines in Bordeaux

With the worst spring frosts for 30 years causing havoc across Europe, Will Lyons and Barbara Drew look at what is next for the 2017 vintage and its anxious winemakers

For the vigneron, with an eye for detail, the weather is the only external influence which cannot be controlled. The arrival of spring marks an end to the relative calm of the winter (November through to March) when the vines across the northern hemisphere lay dormant, pretty much immune to extreme temperature fluctuations.

But as air temperatures start to increase the sap in the vines starts to rise, and small buds burst all along the wooden canes. With the exception of hail, this is the most hazardous time for a winemaker as the threat of spring frosts becomes very real. (Read Brad Greatrix’s post on this tense time of year here.)

This year has been particularly severe as an icy blasts have worked their way across England and the continent, ravaging vines in Bordeaux, Champagne, Burgundy, the Loire and even as far down as the Agly valley in the Roussillon where Le Soula reported frost damage, the first for many years, on some of its Sauvignon Blanc parcels. It is no exaggeration to say that many vineyards have suffered their worst spring frosts for more than three decades.

These occur when the temperature drops down to just below freezing at night; this year it happened midway through the last week of April. For the vigneron it is serious. A few nights like this can destroy their entire annual crop.

It coincides with the most delicate time for a vine, as the buds unfurl into shoots and leaves. If the temperature drops too low, the water will freeze inside the vine and damage these delicate green parts. In extreme cases, the entire bud – containing everything that produces shoots, leaves and grapes for that year – may be killed. Winemakers across Europe, from the Mosel to Northern Italy, have been affected. Ch. Angludet is a case in point – the Bordeaux property has lost nearly all the buds on its vines.

There are, of course, methods of mitigating frost’s impact. At Ch. Léoville-Barton they burnt wet bales of hay in the vineyards, producing huge quantities of steam, which spread amongst the vines, dissipating the frost somewhat. Wine growers in England have used giant candles between the rows to try to bring a little warmth to the vines, and in some parts of the Loire vignerons have even banded together to hire helicopters to hover over the vines; producing just enough air disturbance to prevent the heavy frost from settling, and pushing the warmer air downwards. In Pomerol the scene was described as “akin to a warzone”, as helicopters buzzed overhead and smoke from the small fires, lit to warm the vineyards, swirled across the vineyards.

But, in some regions, the frost was simply too severe, and many producers have lost large proportions of their yield. For an annual crop such as grapes, this is devastating. When combined with hard frosts and hail storms from the previous two years as well, it is nothing short of a tragedy, and the likelihood is that many small producers will simply go out of business. For those that remain, prices must inevitably rise to cover the increased cost of production.

One saving grace is that frost is not like hail. Some vines can produce new shoots from secondary buds to replace those lost. As Brad Greatrix, winemaker for English vineyard Nyetimber, says: “It doesn’t mean wipe-out. We’ll recover, albeit not at full yield potential.

In the next few days there will be a second budbreak and it is all still to play for. There is still a chance for a good crop and good ripening. But as your vines get older, the secondary buds are not as fruitful.”

In other cases, the frost has been so late, that the vine is now too far behind in the growing cycle, and the grapes that will be produced from these secondary buds will never ripen before autumn sets in. For those vignerons, 2017 is a stark reminder of the precarious nature of producing wine.