The fuddled identity of Carménère 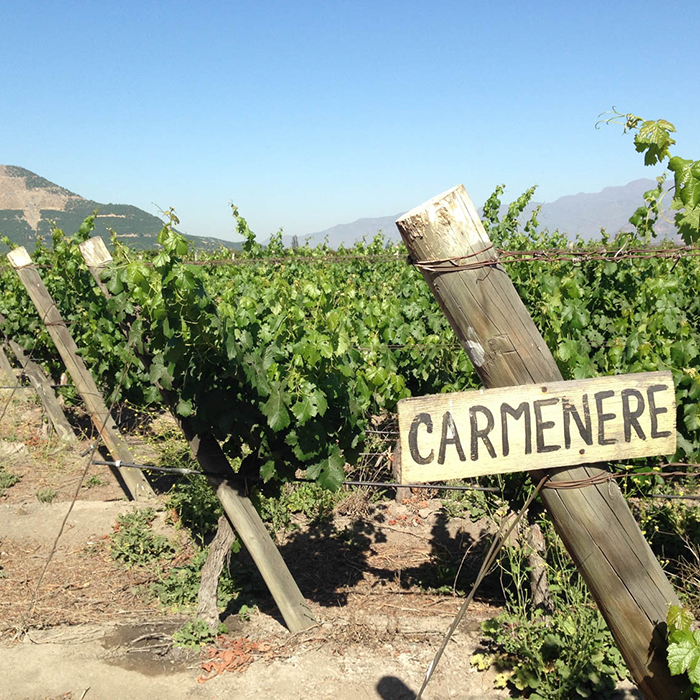 There’s more than one grape variety that has played hide and seek under the folds of time, but perhaps none has done it quite as spectacularly as Carménère. Although most likely an ancient Iberian variety, Carménère found its fame in Bordeaux. It has formed part of the region’s blends since the Middle Ages and became renowned in the Médoc and Graves.

That was until phylloxera rattled its way through Europe in the mid-1800s. As a grape that had always been highly susceptible to coulure and mildew, phylloxera was the final straw for Carménère. By the 1870s, it was considered extinct. After its harrowing demise in Europe, Carménère almost deserved to be placed on a witness protection scheme, and Chile happened to provide just that.

In a simple case of mislabelling, French cuttings of the variety were brought to Chile in the 1850s and planted as “Merlot”. Its clandestine arrival couldn’t have been more timely: the cuttings were taken from Bordeaux just a few years before phylloxera hit France’s shores. Chile’s warm, dry and phylloxera-free climate suited Carménère’s more fickle nature, and the variety spread throughout the country under the guise of “Merlot Chileno”.

It wasn’t until 1994, some 150 years later, that Carménère’s mistaken identity was exposed. French ampelographer Jean-Michel Boursiquot called its bluff on a technical visit to a vineyard in Maipo. It was November 24th, just after flowering, and he spotted the uniquely twisted stamens of Carménère. The revelation wasn’t limited to Maipo. Approximately a third of the country’s Merlot was, in fact, Carménère. Seemingly overnight, the variety had gone from extinction to a population of over 10,000 hectares. But without any other wines in the world to compare it with, Chilean winemakers were faced with a Carménère identity crisis.

In the ‘90s, Chilean Carménère was decisively green. Agronomists had been treating it like Merlot, meaning harvests were too early, irrigation excessive, and yields too high for the later-ripening, low yielding variety that didn’t like to get its feet wet. “Carménère wasn’t even registered as a variety in Chile at the time,” explains Marcelo Retamal, Winemaker at De Martino. “In 1994 and 1995, we sold our Carménère as Merlot… In 1996 we released our first wine labelled as Carménère [the government registered the variety in 1998]. It wasn’t easy, there were lots of problems commercialising it.”

By the early 2000s, Carménère’s personality change was radical: “The style changed from one extreme to another!” says Retamal. “Producers started to over-ripen the grapes to make sweet-flavoured wines with high alcohol and low acidity.” After the style pendulum hit the other extreme a few years ago, it has started to pull back and Chilean producers are finding a balance, discovering the real nature of Carménère. “Carménère is naturally low in acidity, so it is really important to harvest early enough but without the pyrazine notes. It doesn’t like an excess of water, so our De Martino Carménère comes from alluvial terraces with rocky soils.” Today, Carménère is defined by generous berry fruits, an attractive leafiness and spice.

Chile put the variety back on the vinous map and into the modern wine industry’s gene pool, however it seems Carménère is fond of being a stowaway. It has appeared in both Italy (as Cabernet Franc) and China (as Cabernet Gernischt) in recent years. As plantings increase worldwide, whether intended or not, it’s clear that the days of this intrepid variety aren’t over yet.

2012 De Martino Legado Reserva Carménère, Maipo Valley (£10.95): De Martino have sought to redefine the character of Chilean wine with their multi-regional sourcing of fruit and aim to produce elegant, food friendly wines. They are also unusual in their aim to have as limited an environmental impact as possible, down to using lightweight bottles. The wine is a bright, quite intense ruby red. The nose is slightly muted straight from the bottle, but opens up with time to reveal red berry fruits with a veneer of leafiness and spice. These characteristics come through on the palate, which has quite rounded tannins but noticeable freshness. Drink now to 2017. Catriona Felstead MW, Wine Buyer

2011 De Martino Alto de Piedras Single Vineyard Carménère, Maipo Valley (£22.95): This single vineyard Carménère this exudes macerated, dark fruit on the nose with concentrated but fresh blackcurrants and blackberries on the palate. The rustic tannins of Carménère are present but are much more supple than commonly found with this variety. The surprisingly dark fruit profile to this wine comes from the fact that the vines are relatively old (planted 1992), grown on clay soil, and that the minimal intervention winemaking allows their nature to shine through. This is great Carménère from a very exciting producer. Catriona Felstead MW, Wine Buyer

One Response to “The fuddled identity of Carménère”