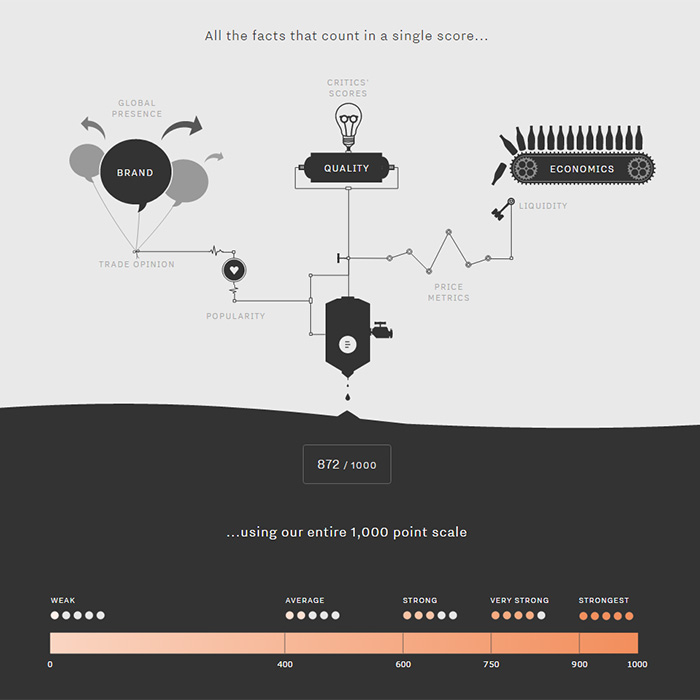 May saw the launch of Wine Lister, a new wine rating system that looks to revolutionise the way we score wine. Sophie Thorpe caught up with co-founder and CEO, Ella Lister, to find out more.

For fine wine, numbers matter. Since Parker’s rise to power in the ’80s, coinciding with the development of an increasingly diverse wine market, consumers have come to depend on scores to cut through an overwhelming number of options. A perfect Parker score could make a wine; less appealing numbers left producers dead in the mid-market water. Some suggested the rise of “wine by numbers” led to the “Parkerization” of wines – the rise of highly alcoholic, concentrated, fruit-forward bombs that stood out against more subtle opponents in 40-wine line-ups.

But while they certainly wield power, can numbers paint the whole picture? Ella Lister, the woman behind Wine Lister, the self-proclaimed “new standard in wine rating”, thought no. Not yet.

Ella Lister started her career as an investment banker, later moving into the world of wine; but she soon noticed the difference in the level of information available for wine versus other commodities that she had become accustomed to in her previous career: “I just thought that fine wine deserved something equally sophisticated.”

It was only when she met the French wine critics Michel Bettane and Thierry Desseauve (now one of Wine Lister’s six partners), and received such a positive response to her concept for “a totally impartial guide or ratings system” that she felt ready to start planning and researching her idea seriously. Five years down the line, Wine Lister is finally live.

So – how does it work and how is it different? Wine Lister compiles information on quality, brand strength and economics to give each of the fine wines it lists an individual score on a 1,000-point scoring system.

A key difference is that the scores use the full spectrum of 1,000 points. While most critic scores would rarely drop below 16/20 or 70/100, Wine Lister rebases key critic scores (Jancis Robinson, Antonio Galloni and Bettane+Desseauve), spreading them across the full scale.

Brand strength is determined by a wine’s distribution in restaurants around the world (not only those with the best food, but those who are known for the quality of their wine lists) and its online search frequency (from partner Wine Searcher). Economic information is drawn from auctions and trading platforms (courtesy of Wine Market Journal and Wine Owners), assessing both price performance and stability. All of this is then combined using a complex algorithm to produce one score, which is then classified as “weak”, “average”, “strong”, “very strong” through to “strongest”.

Ella is quick to emphasise that the lower end of Wine Lister’s spectrum is not “weak” in the grander sense. The “average” category isn’t at all negative, she says, “It means that it scores at the level that the majority of wines in our very exclusive fine wine database score. It’s average in the context of fine wine.”

Alongside the scores, Wine Lister also features four indicators for Value Picks, Hidden Gems, Investment Staples and Buzz Brands – with each category formed by its own complex algorithm.

Of course, this is a tool for the very top end of the market, primarily for collectors and investors. As Ella says, “It’s not like you could rate a supermarket wine on that scale, it wouldn’t be relevant.” The database currently has 2,000 wines (with about 20,000 ratings when you dig into different vintages), but will expand to 5,000 over the next few months as they compile more data.

But how does her team determine what makes it onto the list? What is “fine wine” to them? Ella explains it’s based on several factors, mainly price and quality, but – to a certain extent – it’s not up to Wine Lister. A wine has to have a full complement of data to get onto the site – including scores from their selected critics. In time they will be adding a feature to allow people to suggest wines that should be included in the database. Predictably the list is currently 70 percent French, with Burgundy and Bordeaux heavily dominating.

There is an absolute determination for Wine Lister to be “totally independent” – so much so that, when asked, Ella wouldn’t pick a desert island wine for fear it would display bias: “We treat all the wines equally and anonymously,” she says firmly.

When I asked her whether she felt a number could possibly give a complete view of a wine, she said “For the time-poor, the scores give an instant indication of a wine’s strengths across a comprehensive set of factors. Those with the luxury of time can delve deeper into the underlying data, but the point is they don’t need to do that work, because we’ve done it for them.”

Wine Lister may not be able to convey the wonder of a glass of 1989 Ch. Haut-Brion, but it can certainly direct you to tasting notes that will attempt to do so. And a score of 990 certainly indicates how good a legend like that is. The site feels deliciously high-end to use, with slick design and produces intriguing facts that appeal to the wine nerd, eg Lynch-Bages is more widely distributed than Pétrus in restaurants. We are yet to see Wine Lister’s impact and whether or not it is the beginning of a revolution for wine information, but, as Ella herself said, “A few hours after the launch it dawned on me: it was just the beginning.”

Wine Lister is a paid-for service costing £90 per year, with a free 14-day trial. Find out more at wine-lister.com.