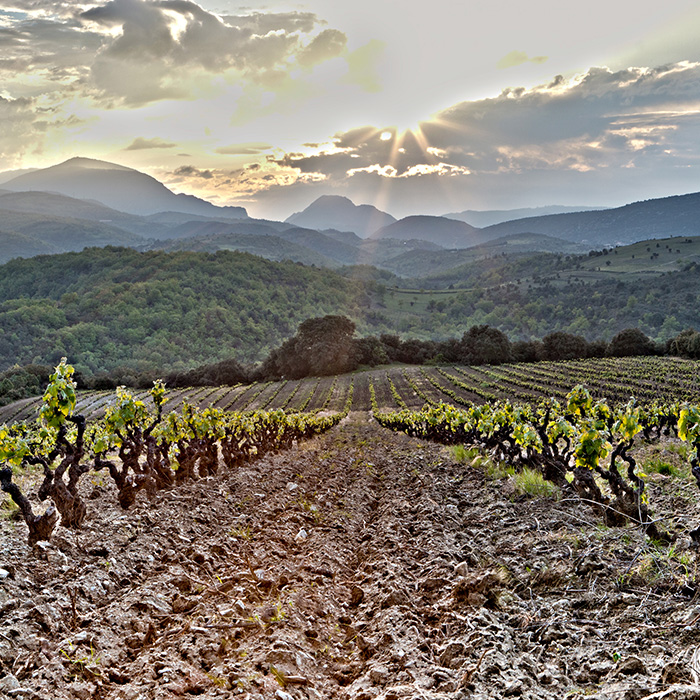 In the midst of RAW – the natural wine fair – Sophie Thorpe caught up with Wendy Paillé, Le Soula’s new winemaker, talking about what it means to be “natural” and what’s next on the property’s agenda.

“You can’t make wine naturally,” Wendy Paillé says frankly. A controversial statement, some might say, when you’re exhibiting at RAW, the natural wine fair. Wendy is the new vivacious winemaker at Le Soula; having arrived at the property in February, she has just officially taken over the reins from Gérard Standley (who has embarked on a crusade to convert Bordeaux to biodynamics, consulting with the region’s châteaux).

Founded in 2001 by Gérard Gauby (of Domaine Gauby) and two English wine merchants, Roy Richards and Mark Walford (whose business was later merged with our wholesale arm Fields, Morris & Verdin), the property is positioned high in the foothills of the Pyrenees, in the Fenouillèdes. The region’s rugged beauty has clearly wooed Wendy, who speaks romantically of the wild thyme, rosemary and lavender which have just come into flower. The property’s labels all bear the phrase terroir d’altitude – for although they are deep south, lying just between Catalonia and the Languedoc, the elevation of their vineyards lends a coolness that counterbalances the otherwise scorching heat.

While Wendy doesn’t believe in the terminology, Le Soula’s natural credentials are certainly not in doubt. To her mind making wine is by its very definition an interventional process, even pruning isn’t “natural”, but it is, she admits, an easy way to communicate a philosophy to consumers. She describes herself as a winegrower (rather than a winemaker), as “someone that takes care of the vines and then uses the fruit to make wine. You need great fruit to make great wine hence you ‘grow’ wine.” As such, there is an emphasis on organics and biodynamics, welcoming true biodiversity into their vineyards.

They are also careful about the use of sulphur. Although it is possible to make wine without sulphur, Wendy believes it’s important to use a little bit – especially “if you want someone in France to enjoy the same wine as someone in Australia,” she says. They analyse the wines to make sure they are using the minimum amount required for stability. I asked whether she felt sulphur was important not just for transporting wines but for their ageability. “All the wines we open now from the 1960s and ‘70s used masses of sulphur, whereas we don’t know what today’s wines will taste like in 50 years,” she confessed, but tasting as far back as Le Soula’s cellar goes, to 2001, the wines are all still, she says, “fresh as a daisy”.

So, what’s next? Le Soula has grown from its original three hectares to 21 today, gradually grubbing up plots of garrigue to plant more vines. Most recently they planted another hectare of Sauvignon Blanc to keep up with demand for their Trigone white. The plots are spread far apart, leading to “a lot of time spent on the tractor”, but Wendy is clear that “you have to respect each terroir”. Their vines are planted on a range of soils – slate, granite, limestone – and they have parcels up to almost 100 years old.

Wendy is keen to emphasise that the wines won’t be changing under her stewardship: “The objective is to keep the same style”. It was, in her words, “the love of Le Soula, the love of the wine and the love of the region” that led her to take the job, after all. She doesn’t want to lose Gérard’s style, the elegance and finesse to the wines, and they’ve been working together for a few months to ensure a smooth handover. She is certain that her touch will inevitably come through in the wines, but it will be an accent on the current style rather than wholesale change.

When I ask how they decide on a final blend (with options of Sauvignon, Marsanne, Roussanne, Vermentino, Grenache Blanc, Grenache Gris, Macabeu and Malvoisie du Roussillon for the white; or a more simple selection of Carignan, Syrah and Grenache for the red), Wendy says, “There is no recipe”. The wines are different each year, the complex blend decided solely on taste, designed to be an expression of the place and the vintage. The resulting wines are remarkably complex and utterly mesmerising, offering remarkable value, coming as they do from a “lowly” IGP (previously a Vin de Pays) appellation.

While Wendy will continue Gérard’s excellent work, she also has a few ideas of her own. With roots in South Africa, and having worked most recently in the Loire, she would love to plant some Chenin Blanc and wants to try making a single-varietal wine with their 85-year-old Carignan. Le Soula’s position as a stalwart of the natural wine scene is firmly established, and we can only be excited about what this property will do next.

Browse our range of Le Soula on bbr.com.