Thespian royalty and rationing: the wine trade in 1945 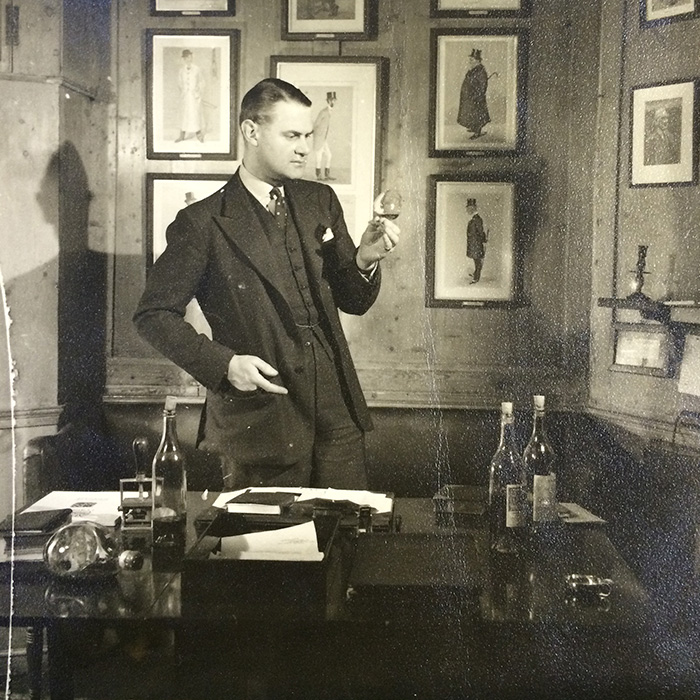 Anthony Berry in the Parlour at No.3 St James’s Street

In the autumn of 1990, Anthony Berry wrote an article for Number Three magazine looking back at the wine trade in 1945, struggling in the shadow of WWII, and recalling an unexpected encounter with two stars of the stage.

When I came back to Number Three in November 1945 the wine trade was completely different from what it had been six years before. At that time it had just recovered from the slumps of the early 1930s: cellars were full and customers well supplied. Now, however, all was changed because there had, of course been no supplies from France since the earliest days of the War and only an occasional shipment from Spain and Portugal. Fortunately, the firm had a very large stock of wine, particularly of Claret, in 1939, but although this had been carefully eked out to keep customers reasonably happy during the War, not much remained after six years, and we had lost large quantities of wine confiscated by the Germans in France. As far as spirits were concerned, most of the barley production was commandeered for food, and whisky distilling was so restricted that there was the equivalent of only about one year’s production during the six years of the War. This meant a gap of about 5 years in Scotch Whisky stocks, a gap which took a long time to fill, especially with the better brands like Cutty Sark containing a large proportion of matured malts. Similarly, gin was very scarce, and for some time the only fairly plentiful spirit was Rum, which we then sold in much larger quantities than at any time before or since.

The trade was controlled by the Ministry of Food, which had been most efficiently run during the war by Lord Woolton and was now under John Strachey and later Ben Smith. All supplies were strictly rationed on a quota system, allowing wine merchants to buy a percentage of the quantities they had bought from France, Spain and Portugal during the “datum” year of 1938/39. This meant that we had to impose a similar system on our own customers, who were in any case used to food rationing, so that, strictly speaking, we could only supply people who had bought from us before the War. Sherry, Port and a little Madeira were starting to trickle into this country but under the quota system there was very little choice for the wine merchant, and Hugh Rudd felt so frustrated by the controls imposed by the Attlee Government that for several years we described the wines as “Government Sherry”, for example, and sold them as such under our own label.

It was therefore, at the end of 1945, a complete “sellers’ market” in the sense that demand was far in excess of supply. A reflection of this was that we published no price list of any kind for no less than ten years from 1940 to 1950, which seems extraordinary today. Prices were shown against each wine in our bulky stock books, and were perhaps rather flexible in some cases, with the salesman having to prevent the customer from peering too closely over his shoulder. On my first day back, the instructions I received from Hugh Rudd were to say “no” as politely and firmly as possibly to anyone wanting more than his or her quota. I had every intention of obeying these rules, but unfortunately for me almost the first customers to come into the shop immediately after I had been briefed were Laurence Olivier and Vivien Leigh. She asked in her most pleading tones for special dispensation for a case or two of Champagne (then almost unobtainable) to celebrate the first night of their new play. Needless to say, my knees turned to water and my good intentions were immediately forgotten – I think that if she had asked for ten cases I would have staggered up the cellar steps with them. In the end Mr. Rudd came to my rescue, but even he found Miss Leigh difficult to resist and I think that he eventually allowed her an extra case of Champagne, as well as her “quota” of spirits.

It is difficult for me to realise that all this happened 45 years ago – the same length of time as the turn of the century was to us then. 1900 at that time seemed a different age, with Queen Victoria still on the throne and the British Empire flourishing, whereas to me now, 1945 seems only the day before yesterday. The wine trade probably changed more in the last 45 years than it did between 1900 and 1945, in spite of all the controls and privations of the two World Wars. It is true that there is still a sort of rationing with some wines, where demand is even greater than supply, but nowadays it is on the whole very much a “buyers’ market” with almost every civilised country in the world producing wines of better and better quality in sufficient quantities.