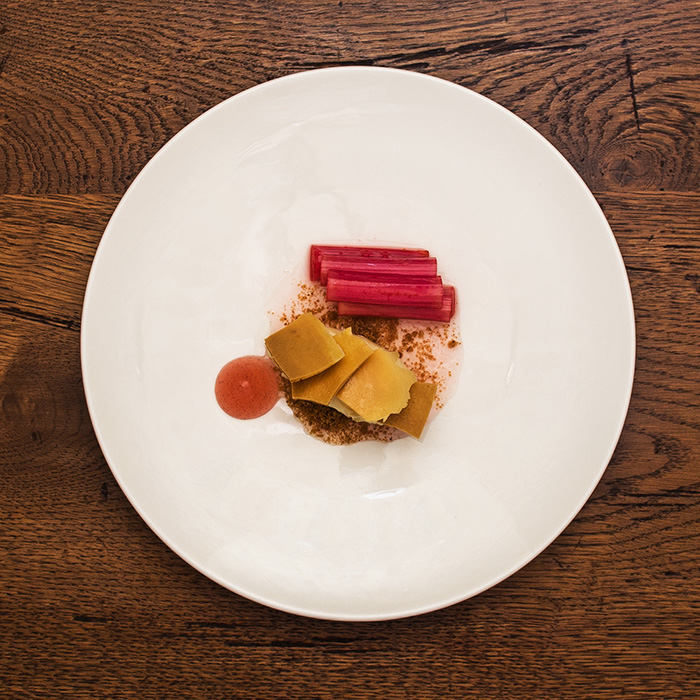 This month our Head Chef Stewart Turner highlights the versatility of rhubarb, with its mouth-watering balance of sweet and sour, while Demetri Walters MW suggests the wines which work with the season’s slender stems.

On the table: Rhubarb comes in two distinct styles – the hardy outdoor-grown, and the delicate “forced” or Champagne rhubarb, which is technically out of season as it’s forced into being, hence the name.

We are now in the middle of the forced season which runs from the beginning of January until the end of March, when the outdoor rhubarb takes over. Unlike sturdier outdoor-grown stalks, delicate forced rhubarb has an elegant sourness that needs only very light cooking: once poached it has the most amazing pink hue, one of my highlights of the cooking year.

I always feel there is so much more to rhubarb than crumble; it’s very versatile, working fantastically well in both sweet and savoury preparations. I’ve included one of each below – a dessert from our current menus and a chutney which is fantastic with Stilton.

In the glass: Rhubarb-based puddings and desserts are unique in their ability to pair well with sweet wines. This is primarily because of rhubarb’s marked acidity and refreshingly tart flavours. Thus, in combination with sweetness, rhubarb offers balance. If the dish is less sweet and inclines to delicacy, then explore the versatility of demi-sec Champagne or the delightfully frothy and moreish Moscato d’Asti. The complex weave of textures and flavours that rhubarb offers work as the perfect foil to wines made under the influence of noble rot (botrytis). The resulting marmalade and honeyed notes are poised when coupled with rhubarb.

In the case of Stewart’s poached rhubarb with white chocolate and ginger mousse, my favoured wine would be a Vouvray moëlleux. This type of wine also possesses the texture and acidity to complement the rhubarb chutney. In fact, any medium-dry to medium-sweet, richly-textured white wine, particularly those made more complex by botrytis, would be ideal.

Start by poaching the rhubarb: place a single layer of rhubarb in a heatproof dish; combine the water, sugar, vanilla, cinnamon, orange zest and star anise; bring to the boil and pour over the rhubarb. Cover with cling film and set aside to cool. (As an optional extra, once cooled, take half the poaching liquor and place in a shallow tube. Freeze until solid then scrape with a fork to make a refreshing granita.)

For the mousse, melt the white chocolate, then fold in the cream and crème fraîche and mix in the diced stem ginger. Place in a tub, cover and allow to set in the fridge for at least four hours.

To make the caramelised white chocolate, preheat the oven to 125˚C. Lay the (chopped) chocolate out on a lined baking tray and place in the oven. It will take about an hour, but needs to be moved every 10 minutes so that it heats evenly and doesn’t burn. It will look a bit strange as it cooks, but keep mixing and spreading it out until you have a smooth, golden caramel. Allow to cool and set in the fridge then break into shards.

To serve, drain the rhubarb and discard the spices. Place some rhubarb on a serving plate and place a scoop of the mousse alongside. Finish with the caramelised white chocolate and drizzle with a little of the poaching liquid. 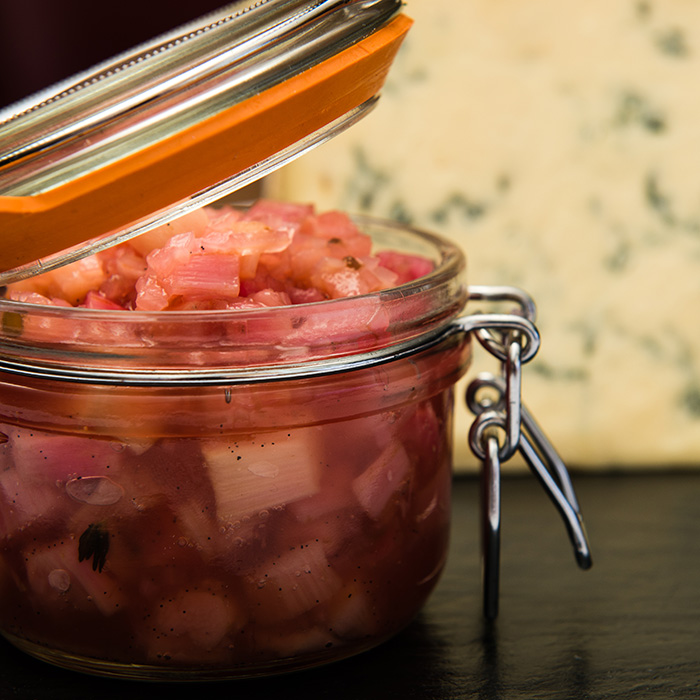 This is slightly different chutney that is only lightly cooked to retain some of the rhubarb’s texture – fantastic with cold meats, smoked fish, charcuterie and cheeses

In a splash of olive oil sweat the shallots and garlic until soften but not coloured, then add spices, vinegar and sugar. Bring to the boil and simmer until syrupy. Add the diced rhubarb and continue to simmer until just cooked – about 10 minutes, but this depends on the size of the rhubarb (outdoor stems will need more cooking than forced). Drain the chutney in a sieve and return the cooking liquor to the pan. Boil until the liquid starts to turn syrupy again, then fold in the rhubarb and set aside to chill. Place in sterilised jars and keep in a cool place, or in the fridge once opened.