A triptych from the Languedoc 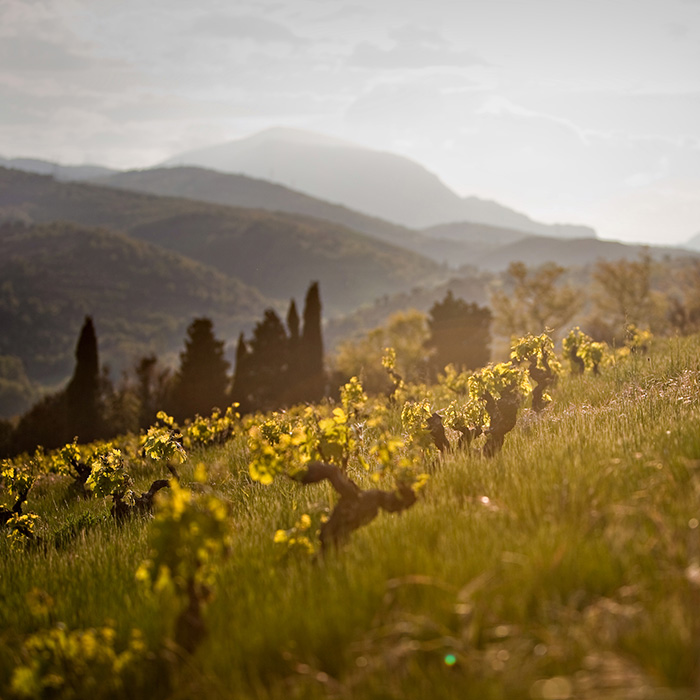 Jancis Robinson, in her Oxford Companion to Wine, describes the Languedoc-Roussillon as “France’s best value region, and certainly its most important in terms of volume”.

The region is indeed large, covering an area of over 3000 square kilometres, and until 2001 it produced more wine than the entire United States. There is a myriad of different wine styles, quality levels, grape varieties and locations, from the schist terraces of Collioure to the flatter limestone plains in the Mèze. It is this diversity that makes the region so fascinating, and somewhere that I find constantly intriguing.

The Languedoc’s wines are often seen as providing excellent value, which indeed they are (I’m thinking along the lines of Picpoul de Pinet, St Chinian, Minervois and Corbières to name but a few). This perceived value is, however, a double-edged sword, for the more interesting producers suffer slightly in this market; their marginally higher prices provide exceptional value, but are regrettably seen by some consumers as too expensive for the region. These producers make small quantities of brilliant wines, often from incredible, old vineyards (deemed unprofitable by most of the large co-operatives and due to be grubbed up) that are planted at high altitude with bush vines on poor, ancient soils; they farm organically, and often according to biodynamic principles (meaning back-breaking work, all done by hand).

I was lucky enough to take a group of sommeliers on a three-day road trip across the region last month, visiting a selection of Languedoc’s most masterful producers; below are my notes on just three of them.

There are so many incredible personalities making incredible wines in this enormous sea of vines: I implore you to go forth and seek, spend what you might expect to pay from a more ‘renowned’ region, and be very pleasantly surprised by the outcome.

We began in Prugnanes, a small village in the hills above Calce, visiting Le Soula. This is a project founded by wine merchants Mark Walford and Roy Richards in 1991, in partnership with the legendary Geraud Gauby of Domaine Gauby. They source parcels of old vineyards in varying terroirs, at varying altitudes. In this baking-hot part of Southern France the importance of altitude and old vines is ostensible. The former means that vineyards will be several degrees cooler than the villages below, while the latter mediates the effects of drought, and when it rains, torrents of water.

The 2009 Le Soula Blanc is a blend of Sauvignon Blanc, Macabeu, Grenache Blanc, Chardonnay and a mix (making up three percent of the blend) of Malvoisie, Grenache Gris, Vermentino, Marsanne and Roussane. This wine has richness, as one would expect, but with brilliant poise and freshness leading to a long, saline finish. If you have discovered the wines of the Swartland in South Africa this could be for you.

The 2010 Le Soula Rouge (a blend of Carignan, Syrah and Grenache) is one of the best I’ve tried (being fortunate to try several vintages of late), with production reduced by over 40 percent (only 14,000 bottles made) due to uneven ripening. Try it slightly chilled, or allow it to age gracefully in the silence of your cellar.

Olivier Jullien makes his wines from 15 hectares of vines, planted over several different parcels and principally on two different soil types (limestone and schist) on the plateau of the Terrasses du Larzac (recently given full AOC status) around the village of Jonquières, north of Montpellier.

Olivier favours Carignan and Mouvèdre for the base of his blend, adding Syrah and Grenache to complement the freshness of the former varieties. These wines are unlike anything else I’ve tasted from the Languedoc, with a tautness and classicism more akin to Bordeaux. There are no ripe, jammy fruit flavours here, and no over-use of new oak. They age beautifully; the magnum of 2006 I had at Clove Club recently was still a baby.

His white wine, made from a blend of Grenache Blanc, Carignan Blanc, Chenin Blanc, Roussane and Clairette was unexpectedly brilliant, and well worth trying; a richer, more spicy style than the aforementioned Le Soula, balanced with crisp acidity.

Rémy Pédréno was a computer programmer by trade, before buying land in 1999 to make his wines outside the town of Nimes, in the Langlade. Until the advent of phylloxera this area was renowned for the quality of its wines, with the town bestowed a symbol of quality by the Court of Louis XIV in 1696. Believe it or not, the reputation of the wines from Langlade was equivalent to the great wines of Burgundy.

Rémy’s 10 hectares are worked organically and mostly face north, giving his wines balance and imparting freshness. He insists on working principally with Carignan (Grenache, Mouvèdre and Syrah making up the rest of the blend), deemed by many in Southern France to be a simple blending grape, and largely being grubbed in exchange for EU cash. Rémy’s Carignan comes from old bush-vines, between 30 and 60 years old, giving his wines an intense perfume and minerality. It is also the reason why his wines do not qualify for the Côteaux du Languedoc AOC, instead being labelled as lowly Vin de Pays du Gard. Elegant, beguiling, pure; these wines are concentrated without ever being extracted, always perfumed and heady without being sickly; an iron fist in a velvet glove perhaps?

Rémy makes a mere 7,000 bottles of a white, from Chenin Blanc. Buy it if you see it, these wines are like Hen’s Teeth.

Find out more about the wines of the South of France at one of our themed dinners or tastings.